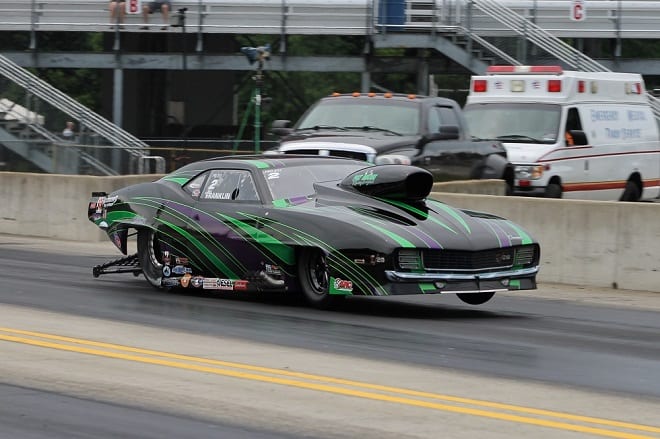 Four of the best racers in Switzer Dynamics Pro Nitrous presented by MoTeC will face off in a special shootout race at the 2nd annual Professional Drag Racers Association (PDRA) North-South Shootout, July 14-16, at Maryland International Dragway. Fans of the PDRA Racing Facebook page voted to decide the pairings for the Flatout Gaskets Pro Nitrous Wars Shootout, set to run during Friday qualifying. The $5,000-to-win race-within-a-race is in addition to the PDRA’s usual four professional classes, four sportsman categories, and the special-feature Extreme Pro Stock and Outlaw 10.5 classes. 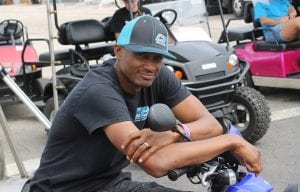 Pro Nitrous has been one of the most competitive classes this season, with three different drivers seeing the winner’s circle in the first four races. Tommy Franklin (pictured above) won the season opener at Tulsa, Travis Harvey scored the Rockingham win, and Jay Cox won the two most recent PDRA races in Texas and Michigan. Steve Jackson, twice a runner-up to Cox, joins Franklin, Harvey and Cox as the four competitors in the Flatout Gaskets Pro Nitrous Wars Shootout.

The first pairing of the shootout will see Cox take on Jackson in a rematch of the Texas and Michigan final rounds. 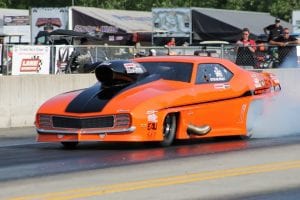 “I’m locked and loaded and I’m coming to wear Jay Cox smooth out,” declared Jackson. “We’re ready. We’re excited. Summertime racing is where I make my bread and butter. We’re really good at power management this time of year. This separates the men from the boys. Everyone can haul butt when it’s 60 degrees. We’ll see who’s got the know-how to go fast when it’s 90 degrees.

“Jay’s wore me out the last two times we’ve raced and I’ve been talking smack to him the whole time. I’m not going to let up just because he’s beaten me. The first time he beat me, he should’ve beat me. The last time he beat me, I was just too good of a driver and went red on him. All I have to do is not screw up and I’m gonna’ smash him into the ground.”

Cox and his Bryant Industrial Crane & Rigging team are equally prepared for their match-up with the Bahrain 1 Racing driver. 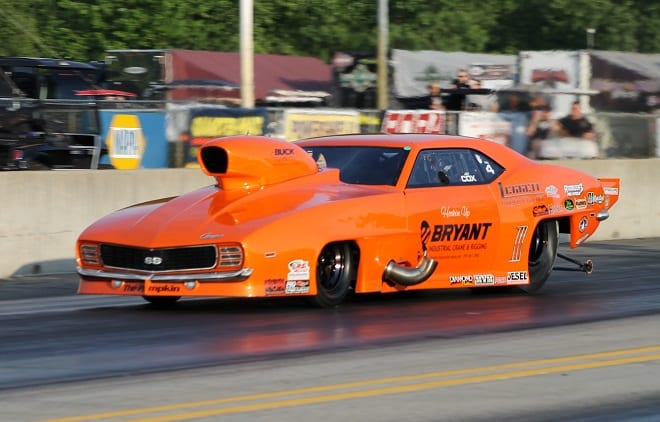 The other first-round pairing will pit Harvey, “The Carolina Kid”, against Franklin, hailing from nearby Fredericksburg, Virginia.

“This is a home event and we’ll have a lot of the home crowd there. All of our egos are in the way for this Pro Nitrous Shootout, so at least we get to run that first. The competitors – Jay, Stevie and Travis – we all have really good cars right now and we’re all tight, but we’re definitely going to give it everything we’ve got. There’s no doubt about that. ” Franklin claimed.

The all-eighth-mile series’ sportsman classes will also be in action at the PDRA North-South Shootout. Past champion Dan Ferguson enters Maryland with one win and the points lead in Ronnie Davis Top Sportsman presented by MagnaFuel. Lucas Oil Top Dragster points are currently led by North Carolina’s David Brown, followed by Bob Henry and young gun Justin Kirk. Kendal Little is the Talbert Pro Junior Dragster points leader, while Mia Schultz is in first in MegaCorp Top Junior Dragster and third in PJD.

For the third time this season, the PDRA will welcome the mountain-motored Extreme Pro Stock racers as part of a special feature for the Maryland fans. Longtime Extreme Pro Stock driver John Pluchino rolls into Maryland International Raceway as the most recent winner on the tour, having won at Michigan and runnered-up at Rockingham. Rockingham winner Richard Penland and Michigan runner-up Brian Gahm round out the top three in Extreme Pro Stock points.

Back for the second time in 2016 will be the small-tired machines of the DiSomma Racing Engines Outlaw 10.5 class. Racing as a part of the Mickey Thompson Tires Outlaw 10.5 National Championship Series, fans can expect the likes of Michigan winner Frank Pompilio and OTF favorites Nick Agostino, Mark Micke, and class sponsor Anthony DiSomma.

The 2nd annual PDRA North-South Shootout, July 14-16, will begin with a full day of open testing from 10 a.m. to 8 p.m. on Thursday, June 14. Friday’s action will begin at 10 a.m. with three qualifying sessions for all classes. A final qualifying session will begin at 9:30 a.m on Saturday, followed by pre-race ceremonies at 2:30 p.m. Pro eliminations are scheduled to kick off at 4:30 pm. A wheelstander and side-by-side jet cars will close out racing action on Friday and Saturday.

For tickets, discount coupons and more information on the PDRA North-South Shootout at Maryland International Raceway, please log on to www.PDRA660.com.