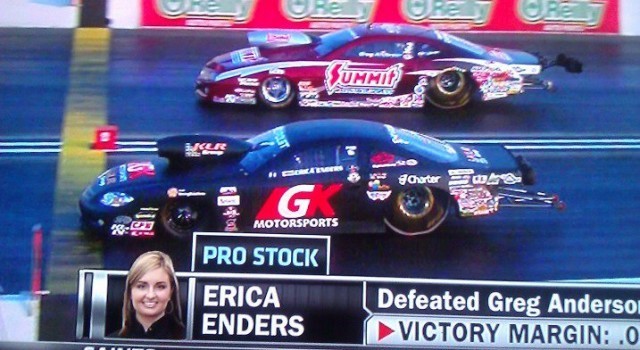 So, it’s official – Erica Enders is the first woman to win in NHRA Pro Stock competition.

Enders drove her GK Motorsports Chevy Cobalt to the final round of the NHRA O’Reilly Auto Parts Route 66 Nationals and took out four-time world champion Greg Anderson with a 6.627-second, 207.40mph blast over Anderson’s 6.641/208.36mph effort.

Enders, one of only six females to ever compete in the 200-mph factory hot rod category, raced past Kurt Johnson, Vincent Nobile and V. Gaines in the first three rounds to advance to her seventh career final round. From there the 28-year-old Houston native led season points leader Anderson all the way down the track in the final round to finally get the victory she has been seeking since starting her Pro Stock career in 2005.

“It’s awesome,” said Enders, who becomes the 12th female to win an NHRA pro category race. “I think that if I could have planned it, I would have asked to run Greg in the final. You know that he made it very clear that he didn’t want to lose to me last year when we ran each other here in the final. He’s a very competitive guy and I love him to death, but I couldn’t wait to beat him. I’m glad [the win] came here in Chicago. I had my first final in Pro Stock here in 2005, so it was nice to circle back around and get it done here.

“Pro Stock is tough. It will humble you in an instant. When you think you’ve got it figured out, you go to Bristol and blow all your [engines] up. I can’t say enough about my guys (crew). They’re amazing and I love them.”

Close on many occasions but never quite able to seal the deal, Enders credits her breakthrough in Chicago to her team.

“Yeah, my guys back at the shop have been really working their butts off to get us power,” she said. “We’ve been trying some new R&D stuff to get better. We did a last minute test in Rockingham last week in over 100-degree weather and I guess it really paid off in trying to get ready for this hot mess.”

Despite their struggles in Bristol, Enders and company had a good feeling about the Route 66 Nationals, and clearly their suspicions weren’t unfounded.

“We had a feeling coming in. My crew chief is pretty lucky and he’s got good feelings for these things. He doesn’t say it often, but when we rolled through the gate on Thursday he said, ‘I got a feeling.’ And I did, too. The key to it is just being confident and having a positive attitude. It was a long, hot day and it was a true challenge to stay focused, but it’s also my job, so I was glad that I drove well and got the job done for my guys.”

Happy wouldn’t do justice the emotions running through Enders’ body as she coasted through the shutoff and turned off the track in Joliet with a slew of NHRA Safety Safari, track personnel and, of course, cameras and reporters waiting to congratulate her.

“When I pulled the chutes, right before the finish line, I looked over to the wall where the win light is and when I saw that thing come on, I was like, oh my…,” she said. “I can’t repeat what I said in the car. The guys were screaming in my ear. It was just like everything came togehter. I’ve dreamed of this day my entire life and it’s so awesome that it finally came true. It was an awesome feeling.”

Though difficult to fully appreciate in the moment, Enders gave credit to her early inspirations that drove her to pursue a career in drag racing.

“For pioneers like Shirley Muldowney and Shelly Anderson-Payne who were my heroes growing up and all the women who paved the way, ya know, there are a lot of little kids that look up to me because of the Disney movie, and I hope they see with me that anything is possible if you work hard and believe in yourself.”