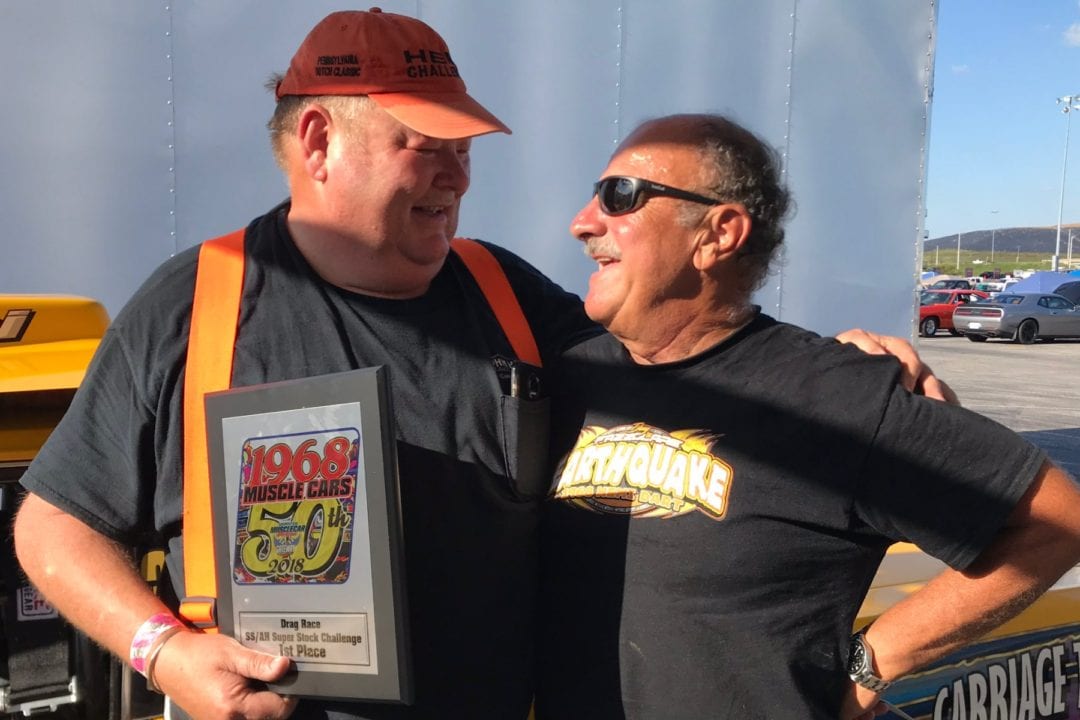 You’ve heard it. You may have said it.

Mopar or no car.

The brand has a presence in racing like no other. Mustang and Camaro? Much respect to those legends. Having one iconic car is an accomplishment. But having several? Like the Challenger, the Charger, the Superbird, the ‘Cuda; hell, the Dart?

Recently at Gateway Motorsports Park outside St. Louis, the facility hosted its inaugural Monster Muscle Car Weekend, a celebration of all things Dodge, Plymouth, and Chrysler. The event within the event, the Hellcat Nationals, displayed Mopar’s Factory Stock entry. The brand received a huge bump when Leah Pritchett, an NHRA Nationals Top Fuel and Pro Mod winner, double-dipped in the Factory Stock class, winning both the US Nationals and the points title.

Leon Epling also knows a thing or two about caressing a Hellcat to the finish line. In a car he built, Leon’s son Jason Epling set a number of new records at Gateway on that hot, greasy weekend. With an 8.51 at 159 mph, Jason’s pass set the new marks for quickest pass by a Hellcat as well as the mile-per-hour record and the Hellcat blower-only record.

September in the St. Louis area can still see some high temps and high humidity, as was the case for the Eplings. It wasn’t surprising to hear Leon wasn’t expecting Jason’s pass.

“Not in the heat, no,” Leon said. “No one was expecting those kind of numbers in the heat. We’ve got a new Epling-Hensley motor that me and (Matt) Hensley built and a new Kenny Bell supercharger 4.9 that took care of the heat better than we thought!”

For his part, Jason knew he was piloting a special lap when he launched.

“Oh, yeah. When you get a good launch, you can feel it in the small of your back pretty good!”

In another highlight of the weekend, NHRA Sportsman veteran Jim Pancake took his ’68 Dart to the Winner’s Circle, courtesy of a victory over Doug Fazzolare in the finals of the Hemi Challenge.

“Doug gave me a good race,” Pancake said. “We’ve been fairly fast all weekend and the car acted a little funny that run.”

Like others over the course of the warm weekend, Pancake’s machine struggled. “It’s not liking that 145-degree track and I’m not liking the heat, either,” he said. “Everything went well, the car performed perfectly. Couldn’t ask for more.” 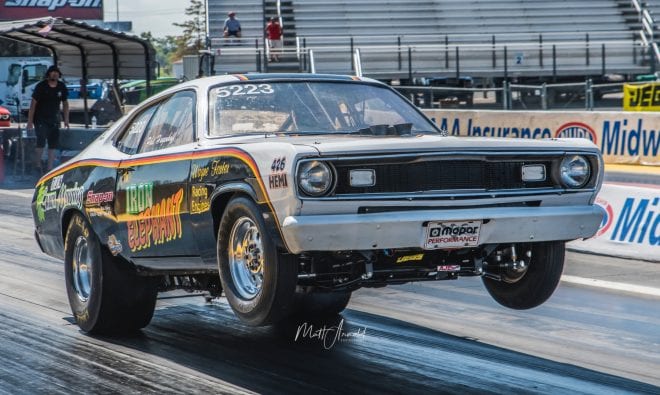 The car itself has a pretty incredible story. The body is the original, found in Las Vegas with house paint on it. “It was pretty funny, actually. It’s just as solid as anything body-wise and it’s got all the original sheet metal including the trunk.”

Making the win more special is the relationship between Pancake and Fazzolare. During photos, the two hugged and laughed with one another. Strong, respectful competitors on the track, great friends off it.

“A great competitor, Jim’s always been tough,” he said. “Always fun racing Jimmy, I’ve known him for many years.”

Fazzalare also faced issues, but not necessarily from the heat. His ’68 Dart had dealt with gremlins for a while and Gateway was no different. Fortunately, he had an escape plan.

“We’ve been fighting it,” he said. “It just hasn’t been running well. We struggled at Indy. It wasn’t 60-footing, it still hasn’t 60-footed right. Actually, it kept getting quicker in the 60 foot as we ran today, but it’s still off. And we’re fighting it.

“I think we’re going to play a little golf in Dallas next week and get away from this race car stuff. Try to get our thoughts together and have a little relaxation.”

Promoting the event is Phil Painter, the longtime force behind Muscle Car at The Strip at Las Vegas Motor Speedway. At The Strip last month for Mel Roth’s Nitrous Outlet Street Car Super Nationals 14 Presented by FuelTech, Painter talked about his love for the Mopar brand and his desire to promote muscle car culture to a generation with little knowledge of the great American cars from our past.

“Watching these racers not only go out there and compete at the highest levels, but to recognize and promote the beauty and power of these great pieces of automotive history, it’s incredible,” said Painter. “I know there are a lot of people like me out there who respect the muscle cars of the past and want to share that love.”

Muscle Car at The Strip continues its tradition of honoring Mopar April 26-28, 2019. If you love these cars, if you want to promote our shared history of adoration for these legends, come on out. See why Mopar continues to be the bar by which the competition is measured.