Scheduled in conjunction with the 11th annual Shriner’s Drag Racing & Hot Rod Expo and the North Carolina Drag Racing Hall of Fame induction ceremony, the banquet was attended by 160-plus EOPM teams and sponsors.

The major news of the evening was the announcement of a $10,000 points championship bonus to be awarded to the 2013 Extreme Outlaw Pro Mod series champion. 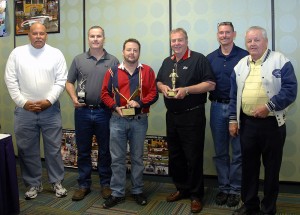 The championship bonus comes on the heels of the recent unveiling of EOPM’s impressive 2013 race schedule, which includes stops at venues such as Atlanta Dragway, zMax Dragway, Virginia Motorsports Park, and Rockingham Dragway along its 14-race tour.

“As Stuart said, none of this would be possible without the support of our series sponsors, and we have several new additions for 2013,” said Moore. “Dart Machinery is on board with us this year, along with CV Products. We’re thrilled to be working with those guys. We’re also very fortunate to have many existing series sponsors back again this year, including Carolina Precision Machining, Buck Racing Engines, Hank Thomas Performance, Beal Racing Engines, Robert Hayes Motorsports, WS Construction, and many more.”

The awards ceremony also featured the crowning of 2012 series champion Danny Perry, who took home Driver of the Year honors as well. Being an inaugural event, Moore announced the creation of several special honors that will be awarded annually. Among them are the Top Sponsor award, this year given to series racer and sponsor Steve Vick of Carolina Precision Machining, and the EOPM Iron Man, awarded to team owner Bob Blasi for his perseverance on the track and in the pits during the 2012 season. The final and most prestigious honor, the Don Plemmons Man of the Year award, was presented to Plemmons himself amid a loud standing ovation. Plemmons was the founder and director of the Don Plemmons Quick 8 Racers Association for over twenty years, and guided its success as the longest-running regional heads-up racing association in the country until his retirement in 2010.

“The Don Plemmons award was created not only to honor Don, a Southern Pro Modified legend, but also to symbolize that EOPM hopes to embody many of the principles of Don’s association,” Moore said. “We want to keep the Quick 8 tradition alive.”

Emceed by the Voice of EOPM, Alvin Dildine, the banquet had something for everyone, including door prizes furnished by CV Products and Hank Thomas Performance that were prepared by Greensboro-based gift company If It’s Baskets.

“The banquet was a huge success, and it was the perfect way to kick off what promises to be Extreme Outlaw Pro Mod’s finest season to date,” Williams concluded.