Plus, Enders-Stevens moved up two spots to fourth in the Pro Stock standings, now trailing Edwards by just 60 points with three races remaining in the Countdown to the Championship.

“I love St. Louis,” said Enders-Stevens, who also won this race last year. “I’m glad to be back. It’s a good place for me.”

Enders-Stevens has raced at Gateway since 2001 but never won there as an amateur. But in 2012, Enders-Stevens finally broke through, beating eventual series champion Allen Johnson on a holeshot to secure her fourth victory of the season.

“This is the place where I signed my deal with Victor Cagnazzi in 2004 to start driving for him,” Enders-Stevens said. “Then we won last year. This track holds a lot of fond memories for me. Now here we are back in the winner’s circle. I love coming here, the fans are great and the facility is awesome.”

Sunday’s victory was her second of the season and sixth of her career, tying her with husband Richie Stevens. She’s also tied with Karen Stoffer and trails only Angelle Sampey and Shirley Muldowney as the female with the most NHRA victories.

“I’ve got all the faith in the world in my guys, and that’s our mentality. This is our championship, and they’re going to have to take it from us. That’s the attitude we have to have. We have to remain positive and optimistic. I’m excited about it.”

Enders-Stevens, crew chiefs Dave Connolly and Tommy Utt and her Cagnazzi Racing team returned to the Pro Stock wars thanks to a partnership with Husky Liners. Company President/Founder Bob Tyler spoke with Enders-Stevens by phone not long after she celebrated in victory lane. 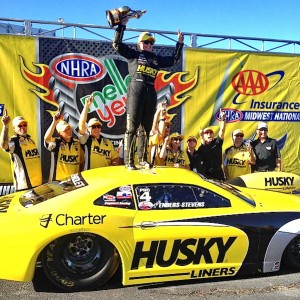 “I just talked to Mr. Tyler and he’s really pleased with what we’re doing,” Enders-Stevens said. “I couldn’t thank him enough. It was four days before Charlotte, the first race of the Countdown, and I thought we were going to be sitting at home watching these guys compete for the championship. That changed really quickly when Husky Liners jumped on with us, and now here we are.”

And she has no intention of slowing down.

“My guys have been really great,” Enders-Stevens said. “We have team meetings and strategize our race-day plans. We got together and agreed that we’re going to have fun. You never know when it’s your last race, and we came back swinging.”

Enders-Stevens started her day by beating Deric Kramer in the first round, as the race was over when Kramer left -.007 seconds too soon. Enders-Stevens’ pass of 6.544 seconds at 211.16 mph was quick enough to secure lane choice against Shane Gray in the second round.

Then came Edwards, who had taken over the points lead by reaching the final, where Enders-Stevens left on Edwards with a .021-second reaction time, and her pass of 6.540 seconds at 211.23 mph was enough to hold off his charging 6.532-second run at 212.36 mph. But Enders-Stevens has her eye on the points lead, too.

“The championship would have been out of reach had we exited first or second round here,” she said. “We have to perform well, and we can’t make any mistakes. There are three races left, and that’s 12 rounds of racing. We’re three rounds out of first, and we’ve got to beat these heavy hitters.

“We’ve got three races left, and we’re going to do our best and let God do the rest. We’ll see what happens.”