Pro Stock ace Erica Enders-Stevens is looking to the future after her team was forced to the sidelines prior to this weekend’s inaugural Auto-Plus New England Nationals at New England Dragway.

Enders-Stevens currently is a lofty fourth in the Pro Stock points standings and is coming off another final-round appearance at the most recent NHRA race in Bristol, Tenn. But sponsorship issues have forced the Cagnazzi Racing team to discontinue racing until funding is found.

“We’re very hopeful of getting back out there and competing as soon as we can,” Enders-Stevens said. “I’d love to be back next week for Chicago, which obviously holds a lot of great memories for me after winning there last year. 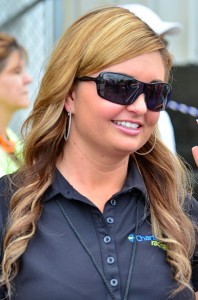 “My phone has been ringing non-stop and I’m telling all the reporters and all of our friends that we’re doing everything we can to be there. I appreciate all the fans and people asking about us. It means a lot that so many people care.”

Enders-Stevens scored an historic victory at Route 66 Raceway last July when she became the first woman to win in the ultra-competitive Pro Stock class. After her victory circle celebration, her day got even better when long-time boyfriend Richie Stevens proposed. The two were married in the offseason.

Since that victory Enders-Stevens has been one of the hottest drivers in the entire sport. Already one of the most popular drivers in NHRA, Enders-Stevens served noticed she would be a consistent threat on the race track, too. Proving the point, she has won five times and raced to 10 final rounds in the last 23 races, including a victory at Phoenix earlier this year.

“It’s a shame because I feel like we are a true contender for the championship,” Enders-Stevens said. “All the pieces are in place for us to win races and contend for the championship, but we just don’t have the funding it takes. That’s the nature of our sport right now.”

Enders-Stevens, 29, and the rest of the management of her team continue to look for sponsorship to return to racing as soon as possible.

“Not being in Epping is certainly not because of a lack of effort on anyone’s part,” Enders-Stevens said. “Me, my dad and Victor (Cagnazzi) have worked as hard as I’ve seen anybody work to try to get something done. It’s progressing nicely, but it’s not happening in the time frame we’d like it to happen.

“This is the toughest thing any of us have ever had to do. My heart is broken for all my guys. Pro Stock racing in the NHRA is just a very tough sell.”