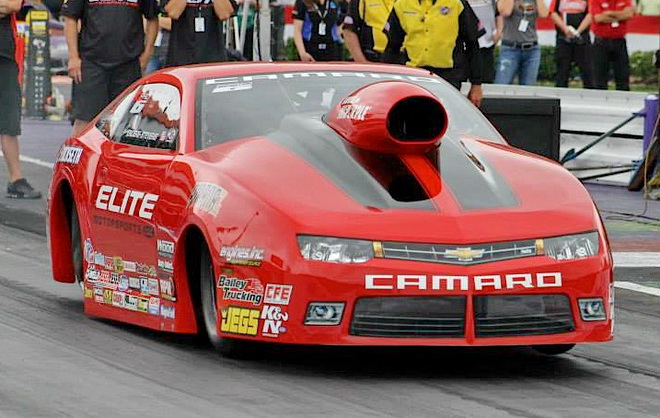 Pro Stock points leader Erica Enders-Stevens will have some very familiar company in the Elite Motorsports camp for the Chevrolet Performance U.S. Nationals and at least part of the six-race Countdown to the Championship as her husband Richie Stevens joins Richard Freeman’s front-running team in a second Elite car.

Stevens, a six-time national event winner from New Orleans, will be driving a brand-new Rick Jones-built Camaro with identical horsepower to his wife’s hot rod. Rick and Rickie Jones will tune both race cars, with two-time ADRL Pro Stock champion Cary Goforth handling clutch duties in the new entry. Stevens’ car will be branded with Elite Motorsports in the primary sponsor position, with associate funding from Pierson Construction. Tom Pierson also will serve as a crewman.

“We’re planning to run at least four races, and depending how we’re doing and any additional funding that comes up we may add some more events,” Stevens said. “This started as a way to shake down the new car for Erica. Believe it or not, Rick says this car will be even better than the one Erica’s been driving. It’s the next-generation chassis from their shop, and obviously their cars are the best.

“Once we decided to run some races, we thought it would be a perfect way to have a little fun and race alongside Erica as she fights for the championship. I’m really excited to race again, and with this car and engine combination I’d say this will be the best race car I’ve ever driven.”

The schedule so far includes the national events in Indianapolis, Charlotte, Dallas, and Reading.

Once famously known as “the Kid,” the now 35-year-old Stevens has nothing to prove on the race track. Aside from his six victories in NHRA competition, the last of which came in 2006 at the fall race in Las Vegas, Stevens has won four IHRA events, one ADRL race, and two ADRL “Belts.” He’s the only driver in history to win Pro Stock titles in NHRA, IHRA, and ADRL sanction.

“I plan to go out there and have a bunch of fun,” Stevens said. “There’s no pressure on me. I don’t feel like I have anything to prove. If I can win some rounds or maybe a race or two along the way, then that will be awesome.”

Stevens, who like his wife got his start in NHRA’s Jr. Dragster ranks, noted there will be plenty of space on his black and red race car for additional sponsors to take this special ride with him.

“The way this car will run, I expect we’ll get a good deal of TV time, especially if we can knock off some of the big teams,” Stevens said. “And I’ll be testing a bunch before Indy in this new car and Shane Tucker’s car, so I’ll be able to get back in driving mode before we get to a real race. Any sponsor money we get will go straight to racing more events.”