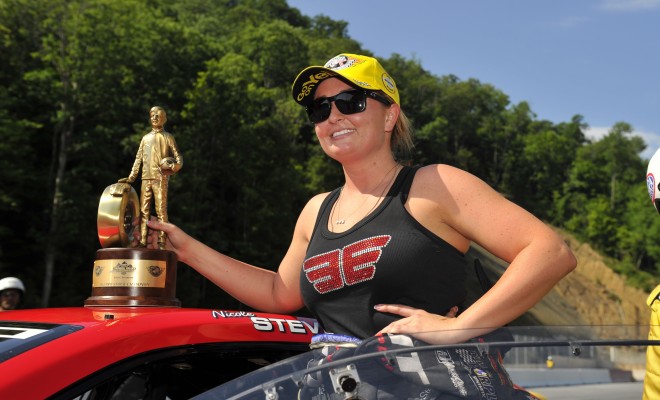 Enders-Stevens Continues to Pull Away in NHRA Pro Stock Points 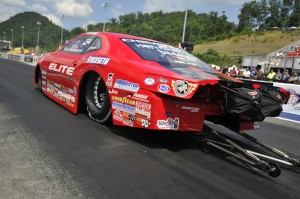 Enders-Stevens Lets Out of the Clutch in Bristol

After leaving the final round of eliminations at Bristol Dragway three of the last four years winless, Elite Motorsports Pro Stock driver Erica Enders-Stevens sealed the deal Sunday by scoring her third win of the season at the Ford NHRA Thunder Valley Nationals.

Capturing the ninth win of her career wasn’t an easy feat, going up against two Pro Stock champions in final eliminations. With a round-one victory over Larry Morgan, followed by red-lights from both Greg Anderson and Jeg Coughlin Jr., Enders-Stevens found herself paired up against Jonathan Gray in the final, but when Gray got a bad start off the line, Enders-Stevens motored her Chevy Camaro to the win with a 6.698-second pass at 207.15 mph.

“Bristol has always been really good to me,” Enders-Stevens said. “I’ve been to three finals in the last four years here and hadn’t been able to get it done until today. As a driver, sometimes you’d rather be lucky than good, and today was one of those days for us. Jeg should have beat us on paper. Fortunately for us, he went red and we were able to move on to the final.

“I’m really excited about the win but it’s definitely my team’s trophy. They’re the ones that gave me the race car that went A to B when it mattered. We were consistent and performed like a team and I couldn’t be more proud of them. I’ve struggled the last month, but it means a lot to me that they’re so encouraging and never waiver.”

Through it all, Enders-Stevens knew she had continual support this weekend, especially from a special passenger riding alongside her Sunday. An unexpected loss this week of Nicole Stevens, a close relative of Enders-Stevens’ husband, may have put a toll on emotions but Enders-Stevens was able to bring home the win in her honor.

“It’s a very sad situation that shouldn’t have happened the way it did,” Enders-Stevens said. “I’m just going to continue to have faith because God has a bigger plan and he needed her in heaven for some reason. I know she was probably riding along with me today. I’m just glad we were able to get it done this weekend after the week that we have had. Winning on Father’s Day is just an added bonus.”

To top it all off, with her win in Bristol Enders-Stevens has extended her championship points lead once again, but this time over Coughlin, who assumed the second spot from his teammate Allen Johnson.

“It’s pretty cool even though it’s unchartered territory for me,” Enders-Stevens said. “I’ve never been in this position, so it’s going to be something that I’m going to have to learn how to handle, but with a team like I’ve got I know we’re going to be just fine.”

Enders-Stevens will look to make it two wins in a row when the NHRA Mello Yello Drag Racing Series makes its next stop for the Auto-Plus NHRA New England Nationals, June 19-22, at New England Dragway in Epping, N.H.

← Previous Story B. Force, Worsham and Gray Qualify No. 1 at NHRA Bristol
Next Story → Tommy Johnson Junior Proves He Still Has It