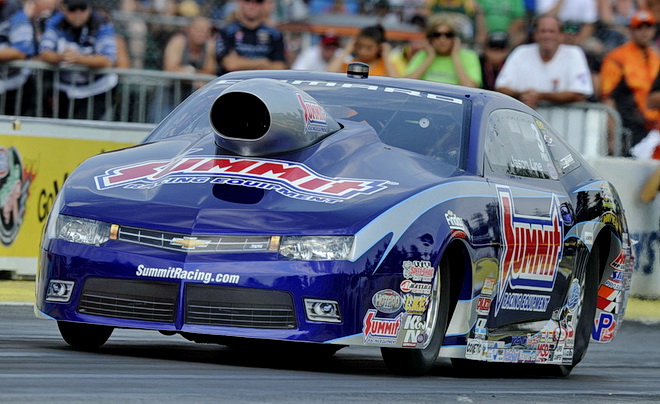 Erica Enders-Stevens is well aware of the history on the line at this weekend’s 50th annual Auto Club NHRA Finals at Auto Club Raceway at Pomona. But her more immediate concern is trying to hold off two-time Pro Stock world champion Jason Line (above). The event also marks the 50th anniversary of the Auto Club NHRA Finals at the historic facility and the race to the championship between Enders-Stevens and Line will be one of the marquee attractions.

Dave Connolly trails Enders-Stevens by 84 points and is still in championship contention, as is Shane Gray at 111 points back, but Line and Enders-Stevens appear to be headed on a collision course for the race to the world championship. 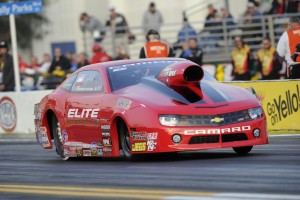 Line, who has 35 career victories including three at Pomona, has a single-minded approach heading into the finale, one that includes finishing the season in style.

“It’s pretty simple, really,” he said. “You have to go out there to win. There isn’t much more to it than that.”

After winning the most recent event in Las Vegas, Enders-Stevens’ fifth win in her banner 2014 NHRA Mello Yello Drag Racing Series season, she now holds a 17-point lead over Line heading into the final event of the Mello Yello Countdown to the Championship.

On top of that Enders-Stevens could become the first female to claim a Pro Stock world championship in NHRA history, which would be a massive achievement for the driver who was also the first female to win an event in Pro Stock. But Enders-Stevens knows her focus must zero in on keeping one step ahead of Line in her Elite Motorsports Chevy Camaro, never an easy task considering his impressive resume. 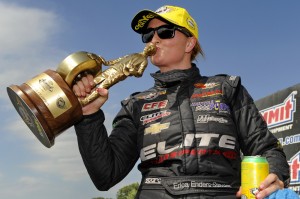 “It’s an interesting separation because you can’t get too ahead of yourself and dwell on what’s at stake, but at the same time, I mean, I’ve never been in this position in Pro Stock, and neither have any of the guys on my team,” Enders-Stevens said. “It’s definitely an interesting and awesome position to be in. But I try to just stay calm about it and focus on just one round, one at a time, and just going after it and doing our best and having fun most importantly.”

And though Line has the benefit of being in–and winning–championship runs in the past, he too realizes it’s a matter of remaining calm, focused and prepared for success.

“Anything is possible, and I feel really good about this weekend. All we can do is go there and do the best we can,” Line said. “Of course sometimes you need a little racing luck as well, but we certainly have the ability to win the race, and that’s what we’re going to try to do.”

Line took command in the loaded Pro Stock class over the summer, winning three straight races in his Summit Racing Equipment Chevy Camaro to take over the points lead. Line, who has four wins and eight final round appearances in 2014, held that top spot all the way to Las Vegas, where he met Enders-Stevens in a pivotal head-to-head matchup in the semifinals. 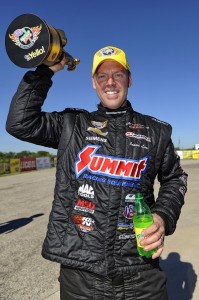 But Enders-Stevens claimed the semi victory and then finished things off with an event win, taking the top spot into Pomona. Line, though, remains thrilled considering what is at stake heading into the Auto Club NHRA Finals.

“This is a great opportunity to have a really cool finish to the end of the year, and everyone on our Summit Racing team is happy to be part of it,” Line said. “It isn’t really difficult to keep emotions in check and stay focused because everybody has a different way of dealing with pressure, and for me, it’s fun. The pressure makes me stay focused.”

The pressure is certainly there for Enders-Stevens as well, in part because of the historical aspect. She admits it is hard not to think about what it would mean to become the first female world champion in Pro Stock, but Enders-Stevens is also using that as a driving force in her title quest.

“At the end of the day I guess it would be very awesome to be able to make history,” Enders-Stevens said. “It would just show any other female that maybe even had a little bit of doubt that they weren’t capable or whatever that I’m a perfect example of a normal kid, through hard work and certainly surrounding myself with the right people and having such a solid support group, that anything is possible. I hope that’s the message that comes across to them.”

Line and Enders-Stevens will both have to concern themselves with the rest of the talented Pro Stock field, one that includes Countdown participants Allen Johnson, Jeg Coughlin, Vincent Nobile, V Gaines, Chris McGaha and rookie Jonathan Gray.

Enders-Stevens maintains she will be ready for whatever situation is thrown at her in Pomona this weekend because of her confidence in a team led by crew chiefs Rick and Rickie Jones.

“This is the first time in my professional career that I have had such a solid group of guys that stands behind me and has my back,” Enders-Stevens said. “That makes my job as a driver a lot easier. It’s a team deal and it’s just a really unique atmosphere, and I’m really proud and honored to be their driver. But they have shown exactly what they are made of this year, and when it comes down to crunch time, everybody pulls their weight, and it’s an awesome environment to work in.”