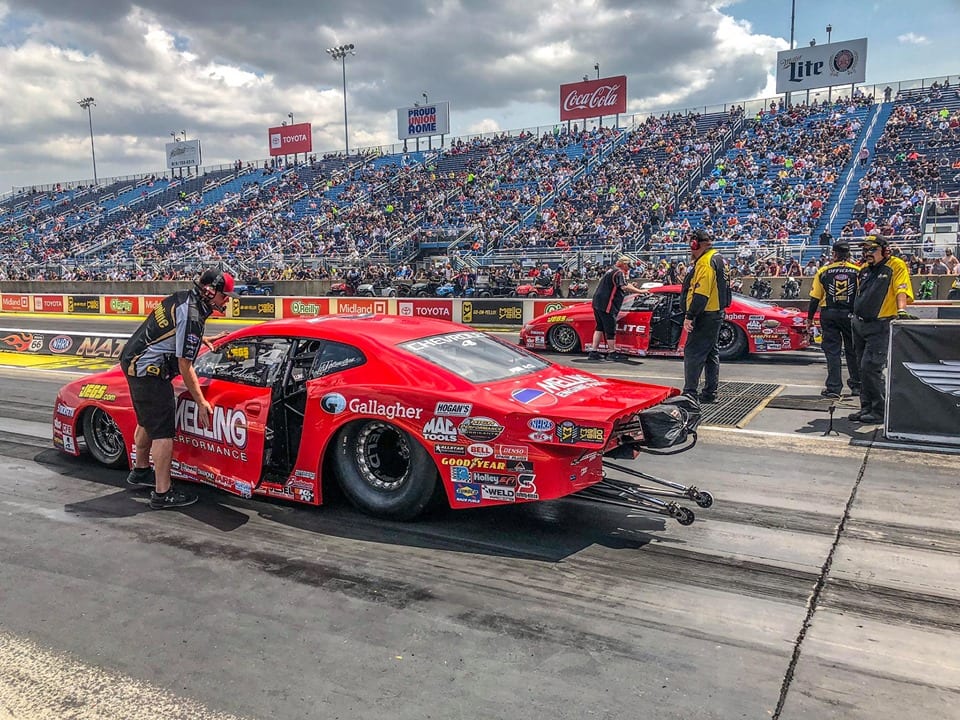 Following Erica Enders’ first final round appearance of the season in Pro Stock, a two-week break from the class could have interrupted the momentum the team built during an impressive weekend in Chicago.

But Enders, a two-time Pro Stock world champion, doesn’t believe that’s been the case. The bulk of the Elite Motorsports team stayed working on the Melling Performance/Elite Motorsports Camaro while Enders raced in Pro Mod at Topeka and Bristol. There was an issue from Chicago they hoped to rectify, and based on Enders’ enthusiasm for this weekend’s NHRA race in Norwalk, the team appears ready to pick up where they left off.

“All of the guys have been working hard at the shop and I feel like everything went in a great direction,” said Enders, who is third in Pro Stock points. “We tested the theory we had and everyone is pretty optimistic about what’s to come. We’re going to go up there swinging the rest of the year.”

After a pair of extended breaks early in the year, things get back to a normal pace in Pro Stock, as it holds the seventh of its 18 races this weekend in Norwalk. Double-duty for Enders, who advanced to the Pro Stock final in Norwalk a year ago, means a third straight week of Pro Mod action – and the eighth of 12 races in that 2019 schedule – but there is plenty of optimism in the Elite Motorsports camp.

Enders was back to her standout self on the starting line in Chicago, working in sync with a strong car. Now, the goal is to extend that success in Norwalk and try to pick up her first Pro Stock win in 2019.

“I’m excited. Pro Stock is where it’s at for me,” said Enders, who has 23 career wins. “It takes a lot of hard work, a lot of smart people and a lot of talent to be successful in this class. We identified the problem we had in Chicago and things are looking really great. I don’t want to get ahead of ourselves, but I think we’re definitely moving in the right direction.”

But Enders, who advanced to the semifinals in Pro Mod last weekend in Bristol, is eager to see more than potential. She wants to see results on the track, especially since there’s only five Pro Stock races after Norwalk until the Countdown to the Championship begins.

Her Elite Motorsports teammate Jeg Coughlin Jr. has a victory this season, but Enders is ready to add to the mix as she tries to win for the second time in her career at Norwalk, where a special ice cream scoop trophy is given to winners along with a Wally.

“I want to do a really good job for my guys because they’ve really worked hard these past couple weeks,” Enders said. “I want to showcase what we’ve found. But it’s definitely a crucial time. I’ve talked about getting that pendulum to swing in our favor and now would be a great time for that. I love racing at Norwalk, too. The Bader family are great promoters of our sport, so we’re excited to try to get another win there and get one of those billet ice cream scoops.”

Mello Yello Drag Racing Series qualifying will feature two rounds at 3:00 and 7:00 p.m. on Friday and the final two rounds of qualifying on Saturday at 1:00 and 4:45 p.m. Final eliminations are scheduled for 11 a.m. on Sunday.

On the Pro Mod side, the first of four qualifying sessions takes place at 2:15 and 6:15 p.m. on Friday, and the final two rounds of qualifying take place on Saturday at 12:30 and 3:45 p.m. The first round of Pro Mod eliminations are scheduled for 12:30 p.m. on Sunday.