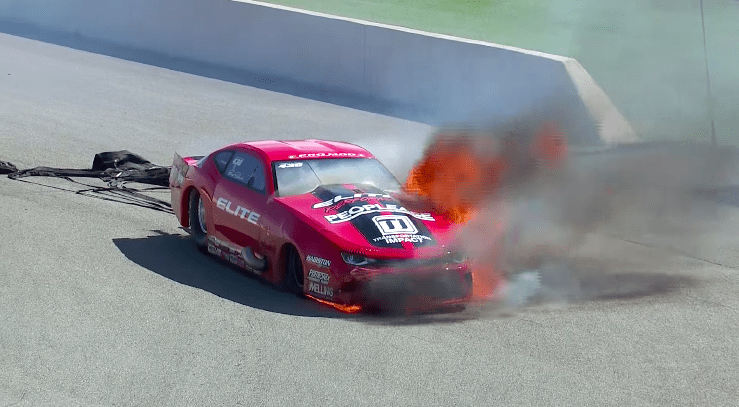 After her NHRA Pro Mod car went up in a ball of flames during the final qualifying session on Saturday in Norwalk, Erica Enders’ first thoughts were getting the car stopped, exiting safely and avoiding any potential disaster. After that, her next focus was simply driving her Pro Stock car.

In a situation she called the “biggest emergency situation” in her career, Enders’ turbocharged Elite Motorsports Camaro went 5.787 at 261.22 mph to re-set the NHRA Pro Mod speed record, but then caught fire after an engine explosion just past the finish line.

Enders fought to get out of the car quickly in a terrifying turn of events, but after she was safe, her thoughts quickly shifted back to racing.

“Once I knew I could breathe, my next focus was making sure we could get the Pro Stock car ready,” Enders said.

She was cleared to race – after her oxygen levels and vitals checked out – shortly after and there was no doubt what she was doing next. Team owner Richard Freeman protested, but Enders had the final word and went right to her Pro Stock car. He wasn’t surprised, saying it embodied the type of driver Enders has been throughout her standout career.

“I think it speaks for itself. She’s the best out here, period,” Freeman said. “When they cleared her, she said, ‘[email protected]&k it, I’m not missing that run.’ She’s not average, she’s way the [email protected]&k above average. It’s unbelievable. And it’s not because she drives for me. It’s always been there.”

Enders has been in tumultuous situations before – including one that had her Pro Stock sliding on its roof down the track – but nothing like the scary situation she faced on Saturday.

Just past the finish line, the engine exploded and went up in flames, filling Enders’ cockpit with smoke and fire. She managed to get the car stopped without hitting a wall, but the fight to avoid the flames, get out of the car and catch her breath in a smoke-filled cockpit was frightening.

“It felt like a great run and we set the new speed record,” Enders said. “At that point, I was at the stripe and I hit the chutes. I went to throw the car in neutral and I heard this loud noise. I made sure I was in neutral and I knew my chutes hit, and at that point, I was like, ‘Get the car stopped.’ But my initial thought was the way it sounded, I don’t want the rear end to lock. I’m trying to think of all these things.

“My car filled up with smoke really quickly, but I didn’t see flames. But then I saw the flames started coming in the bell housing and around the windshield, so I was pulling the fire system as I’m trying to stop the car.

“At that point, you start running out of air and I couldn’t breathe anymore. And then I couldn’t see. I tried to keep it straight as I could, but when I ran out of air I just hammered the brakes, and I got the car sideways and got it stopped.”

Enders then fought to get out of the car as the Safety Safari and driver Justin Bond, who was in the other lane, ran to help her.

“Once I got it stopped, I hit my belts and it was so smoky. I was out of my breath, I just kind of dove out of the car. When I got out of the car, I was on my stomach and I was like, ‘my back is burning, my back is burning.’ So they used the fire extinguisher there and I was trying to catch my breath,” Enders said. “Justin (Bond) told me to get my helmet off, and he pulled my gloves off for me, and once I got my helmet off, I couldn’t get my breath. It was terrible, and then we went to the ambulance and they put me on oxygen right away.” 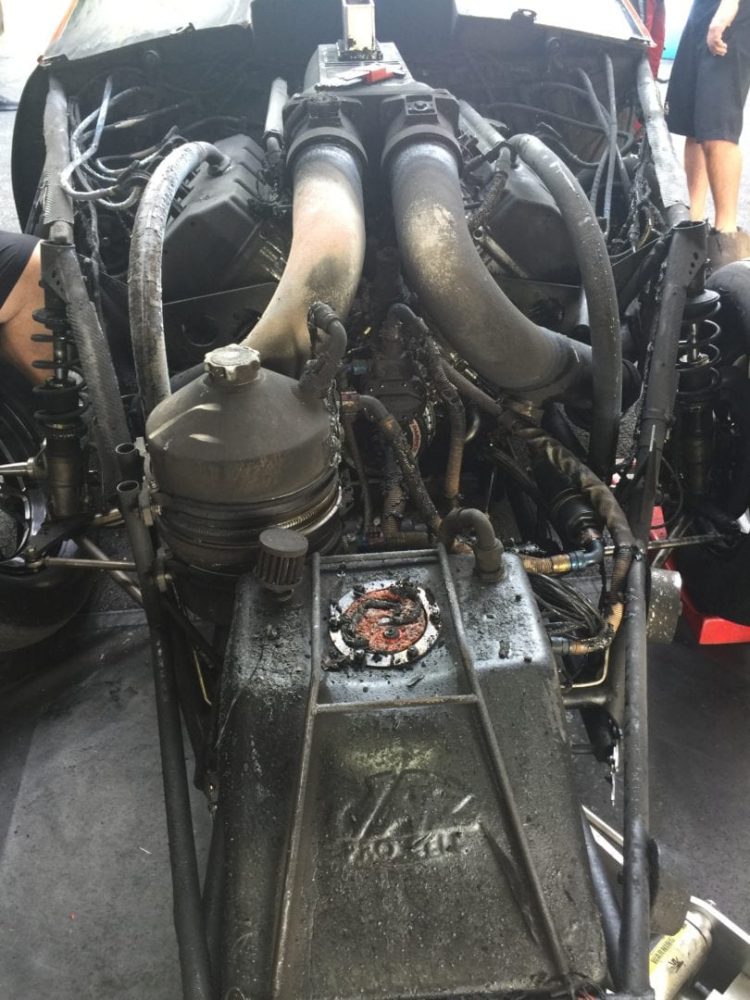 Enders said she threw up after getting out of the car, and then had her vitals checked in the ambulance.

She received oxygen there until those levels checked out, and then got the okay on everything from her heart rate to blood pressure to carbon dioxide levels. From there, her focus shifted to the Pro Stock car.

Enders wanted to check the clutch linkage in that car after adjusting it before the final qualifying session, but there were other motives as well.

Pro Stock might be the two-time world champion’s first love, but Pro Mod has grown on her in recent months. After the harrowing moment on Saturday, Enders also believes it’s a good time to add more safety measures in the class.

After her close call with Jeremy Ray in Topeka, when Ray just missed colliding with her during his massive crash there, Enders wrote down a list of safety items she wanted added to the car.

Those were to be installed after Norwalk, but the safety list grew longer after what went down on Saturday. She lauded her team for being prepared, for the safety equipment working properly, and for the Safety Safari providing immediate relief and support, but Enders hoped her situation leads to even more safety aspects in the class.

“This car was already going from this race to Rick Jones’ shop to get more safety stuff – that’s not required by NHRA, but in my opinion it should be – put in,” Enders said. “If I’m going to drive it, it’s going to have it. Now I have some other things on the list and they will be on my car. I always try to focus on the positive stuff and aside from making a great run and our program moving forward, I’m going to make it a point to present the NHRA with a list of safety things.

“Until you go through a situation that could potentially harm you, you don’t think of it. I’m going to put a handful of things on my car that I absolutely think should be a rule. We should use this as a learning experience and make it as safe as we can for everybody. That’s my goal after that.” 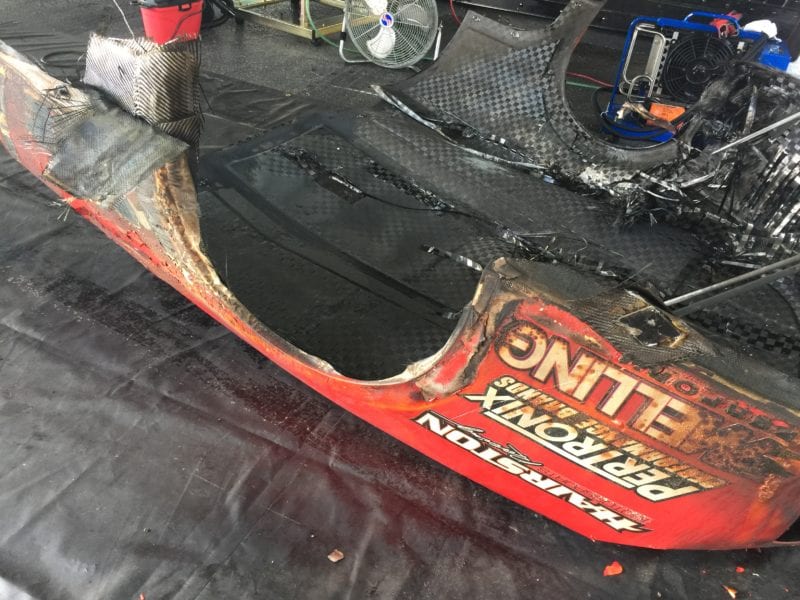 Enders was also moved by the amount of people who stopped by her pits following the ordeal. It obviously started with her sister, Courtney, and team, but continued to drivers and teams from Pro Stock and Pro Mod.

All checked on her status and wished her well, and that wasn’t lost on Enders, who will open Pro Stock eliminations on Sunday against Elite Motorsports teammate Jeg Coughlin Jr.

“It means a lot to me,” Enders said. “Richard came up and got me before I got in the ambulance. After I got the oxygen, I looked out the backdoor and it was all my crew guys. That’s when I got emotional, when I saw them. I gave all the Safety Safari people a hug and once I got back to my pits, all my teammates were there. It means a lot. It’s a family out here. As much as you want kick each other’s butt, it’s a family and we don’t want anybody to get hurt. I’m thankful for the community.”