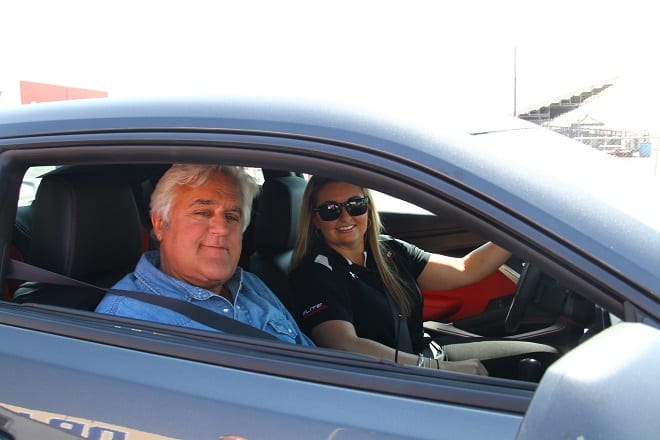 Reigning NHRA Pro Stock World Champion Erica Enders and Elite Motorsports team owner Richard Freeman will appear on the premier episode of Jay Leno’s Garage, which will air Wednesday night at 10 p.m. Eastern on CNBC and will feature Enders teaching the talk-show host/comedian and car enthusiast how to drive a drag race car.

“It will be a great way to introduce the NHRA Mello Yello Drag Racing Series to a new audience,” Enders said. “That 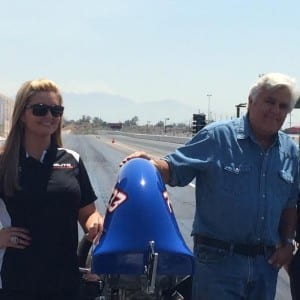 was a great experience and a neat opportunity. I grew up watching Jay Leno and always enjoyed him throughout my life, so it was cool to be able to work with him. He shares the same passion for automobiles that we do, and that was pretty evident.”

Leno has a stellar collection of automobiles, and he invited Enders and Freeman to tour his collection when NHRA returns to California for the season-finale in November.

Jay Leno’s Garage began as a YouTube series about cars and motorcycles with a one-hour special airing on CNBC last year, and it begins as a primetime weekly show this Wednesday.

Enders and Freeman traveled to California after winning at Tennessee’s Bristol Dragway in June to film the show at Auto Club Dragway in Fontana, Calif. Division 7 racer Eddie Fischle supplied a Super Comp car, and the legendary Frank Hawley chipped in support, too.

Enders began by driving Leno around in a new Chevrolet Camaro SS, and the two chatted about their respective careers. Leno was host of NBC’s The Tonight Show with Jay Leno from 1992 to 2009 and 2010 to 2014. Enders became the first woman to win the NHRA Pro Stock world championship in 2014.

Enders clearly is a good teacher, as she recently set an NHRA record by winning three consecutive final rounds on holeshots.

“It was a neat chance to be able to teach him how to drive a Super Comp car with Frank Hawley,” Enders said. “I ended up getting to make a pass in my buddy Eddie Fischle’s car, and he supplied us the cars for us to teach Jay to drive.”

By the end of the day, Leno wanted to make more passes in the car.

“That goes to show how much he enjoyed it,” Enders said.

Hawley, who operates Frank Hawley’s Drag Racing School, reflected Enders’ statements, adding, “When the show’s producer called and asked if I’d be interested in helping Jay Leno learn to drive a Super Comp Dragster I said absolutely, without even asking for details. I grew up watching Leno – I’m a really big fan. They teamed me up with one of our former grads and a good friend, Erica Enders. Erica is so talented, it was great working with her,” said Hawley. “Jay’s love of cars is genuine and he made it very comfortable for Erica and me.”