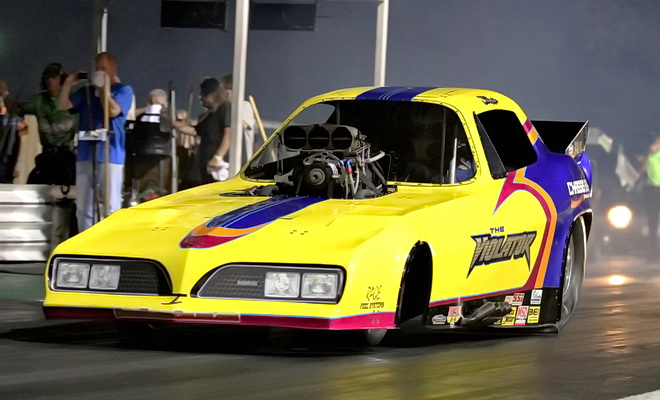 The series known for the past six years as the DragRacingOnline.com AA/FC Challenge will have a new format and a new name for 2015. The new DRO Nostalgia Nitro Challenge will expand to include AA dragsters in addition to the AA Funny Cars. Hedman Husler Hedders will continue to be the title rights sponsor with Comp Cams as presenting sponsor of the six-race season. 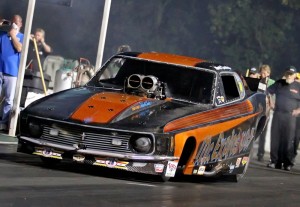 The reason for the addition of dragsters to the program is simple. In recent years the number of Midwest-based AA Funny Cars has dropped to the point that during the 2014 season the DRO series often had less than full fields. In addition to some racers just quitting racing, a big factor for the lack of cars at DRO events was that the IHRA purse for their AA/FC races was approximately $50,000 per event with the winner picking up $10,000, double that of the DRO series.

Then after the 2014 season the series lost two more cars when two-time DRO Champ John Hale and series regular Brian Stewart both opted to go NHRA Funny Car racing and severely cut back or eliminate their AA/FC racing schedule.

“If the series was going to continue there had to be more competitors,” explained Series Director Jeff Burk, also editor of DragRacingOnline.com, “The only option I saw was to add Nostalgia Top Fuelers to the program.”

Instead of being separated until the final round, however, the Hedman Husler Hedders DRO Nostalgia Nitro Challenge presented by Comp Cams will pit Funny Cars and dragsters against each other as they qualify and work their ways through the eight-car field.

The rules for both Funny Cars and dragsters will continue to closely follow the NHRA Heritage Series safety and engine rules including fuel pump, supercharger size, overdrive and ignition systems.

“For several years the AA/FD guys have been asking me to have a series for them,” said Burk. “This seems like the perfect fit as the nostalgia dragsters and funny cars have comparable performances so there should be plenty of close racing. It should make for a great show for the fans and is something they won’t see anywhere else.”

The series will race this year on Friday-Saturday with the exception of the event at Maple Grove Raceway, which will be Saturday-Sunday. The series will race twice at Beacon Dragway in Paducah, KY, the only eighth-mile track on the schedule. Tulsa will again be the site of the season finals where the 2015 champion will be crowned.

As in previous years, there will be no entry fee for car, driver and up to five crewmembers. To participate as a racer or contingency sponsor contact Jeff Burk at [email protected] or 314-322-6445.