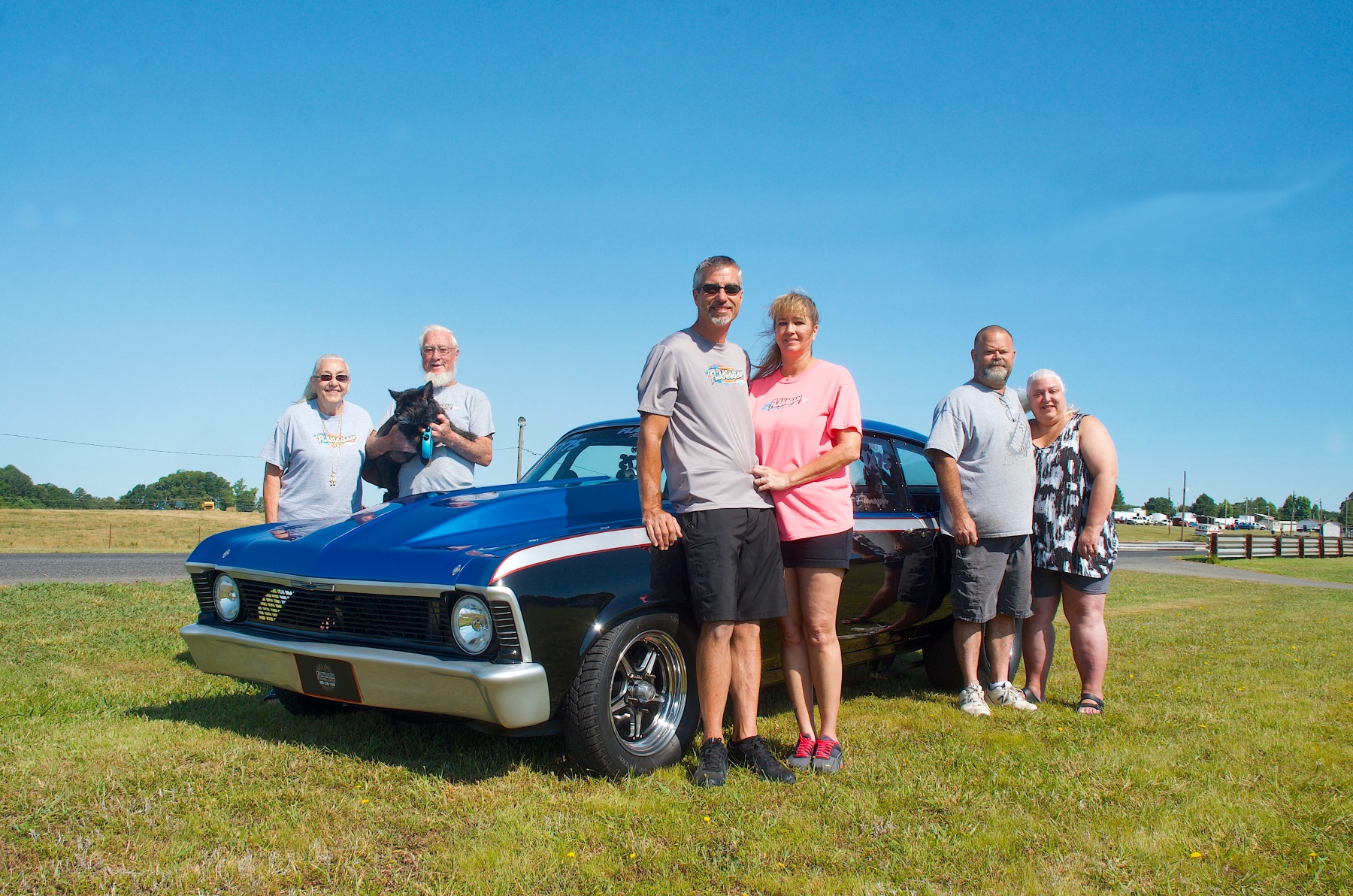 There haven’t been too many weekends since the late 1950s that Frankie Flanagan hasn’t been at the dragstrip. Growing up in Charlotte, North Carolina, his first experience with drag racing came when his next-door neighbor remarked, “Let’s go to Shuffletown,” referencing their local eighth-mile dragstrip, which wasn’t even paved at that time. Flanagan told his mother that he and the neighbor boy were going to Shuffletown, but she just thought it was some place to go and hang out, and had no idea you went there and raced cars.

Flanagan was 16 years old, had never been to a dragstrip in his life and didn’t know much more than his mother did about what went on at Shuffletown Dragway, but that first experience wound up impacting his life forever. “It cost one dollar to get in and race,” he recalls. “I didn’t really know what to do, but I somehow wound up winning a trophy and $35!”

He gave the prize money to his mother, much to her delight. Flanagan was completely hooked and his mother told him she wanted him to go back to whatever Shuffletown was and do the same thing next week!

It was approximately 63 years ago when Flanagan began drag racing his daily driver, a 1951 Ford that he bought for $350 with money earned by folding clothes at a local laundromat for 65 cents an hour. He was still in high school and also dating his eventual wife, Miriam, who accompanies him to the track to this day. “I’ve been married for 55 years…to the same woman!” Frankie laughs. Miriam just shakes her head and smiles, as she holds the couple’s dog, Ozzy, on her lap.

It was Frankie’s second car, a 1957 Ford, that Miriam truly loved to drive. It was blue and white with a 312ci engine. It had ladder bars, a Hurst shifter and an electric fuel pump. When Frankie first saw the car sitting on the lot of Frank Woods’ Used Cars, the vehicle was two years old and had very few miles on the odometer. He quickly ponied up the $900 asking price, and didn’t find out until later that the engine was built by Holman-Moody of Ford NASCAR fame, which was also based in Charlotte. “The previous owner got caught hauling white liquor in the car before I bought it, and the thing would fly!” His best memory of the car was clocking 102mph at Concord Dragway. “I won a lot of races with that car!”

Frankie’s first brand-new vehicle was a 1962 Ford that he ordered new, and it took 16 weeks to finally arrive. By this time, Flanagan was hardly satisfied with anything stock. Four days after he took delivery of the brand-new 1962 Ford, his father walked outside and observed the car’s engine hanging from the limb of his pecan tree. “My dad didn’t hardly know what to think when he saw that!” 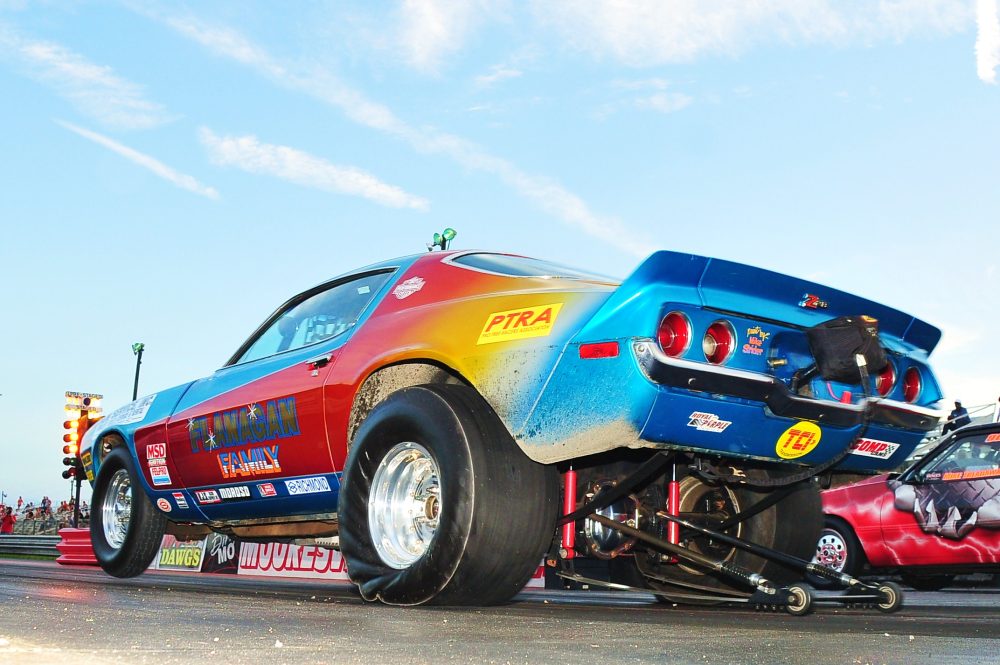 During the same timeframe in the early 1960s, Flanagan also owned and raced a 1937 Chevrolet called “The Vulture.” “It was yellow with Hilborn injectors on it, a Muncie 4-speed with a Dana rear end…made out of junkyard parts, but the car would run!” Flanagan smiles.

There was also the 1962 Chevy II, a straight axle gasser that he raced in practically every gas class there was. “I raced that car to death!”

By now, Flanagan had long since left his first job at the laundromat and was working at Southern Bakery where his dad worked, but he soon realized the real money was to be made working on cars in his spare time. He owned an Amoco service station for a decade, but he was making a name for himself around Charlotte for working on hot rods inside the station. Flanagan ended up buying another shop in downtown Charlotte in 1968 and stayed at that location 31 years. “That was the local racing hangout…everybody knew that shop!” he says.

One of those up-and-coming gearheads was none other than Charlotte racing legend Charles Carpenter. “Charles is my best friend,” Flanagan says. “I built him his first car when he was like 16 years old!”

There was even a five-year stretch when Flanagan went dirt track racing. Among his best memories was the night he hired an unknown young man to drive his car. “Everyone was wondering who was driving my car, because it wasn’t my regular driver.” The young man was none other than Dale Earnhardt! “He wasn’t but about 17 years old, but man, he could drive a race car!”

Flanagan eventually washed off the red dirt and returned to his first love: drag racing. There’s been so many cars he’s owned and raced over the last 60 years it’s hard to keep track of them all, but if there’s one race car so distinct and recognizable that people can’t help but associate with the Flanagan family, it’s Frankie’s 1970 Z28 Camaro that he’s owned since 1972. 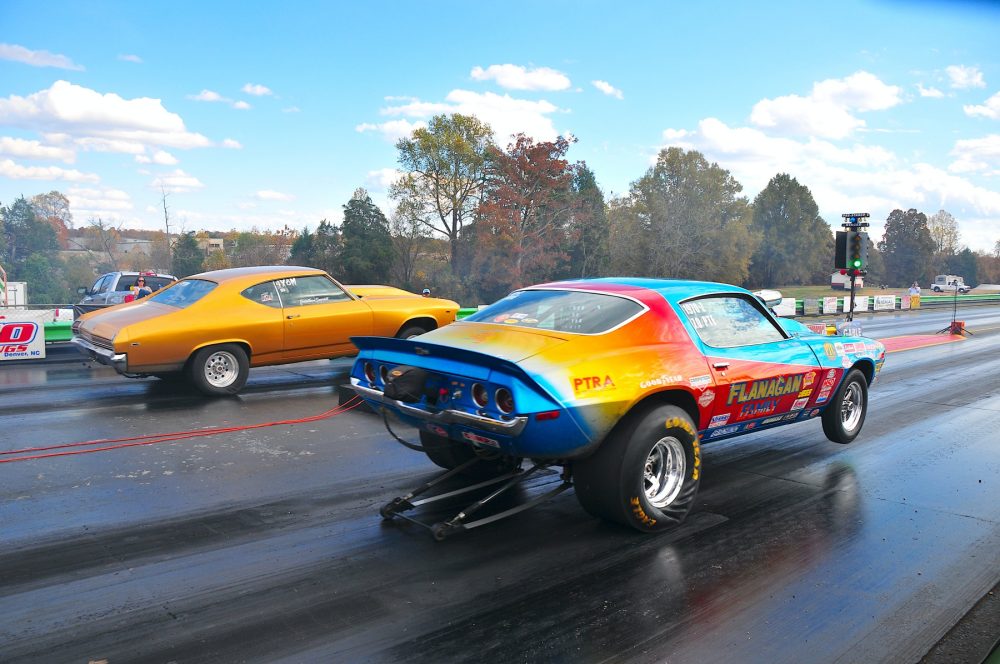 Flanagan had a friend who owned a Sunoco station, and one day a wrecker dropped off the Camaro after it was involved in a crash. “My friend told me that a guy paid cash for the car and his son wrecked it with no insurance! Everything was there, but the front end was tore up, so I gave him $800 and took the car to my garage and covered it up and left it for about a year.”

He debuted the car at the dragstrip in 1974 with a 337ci small block that featured a pair of Gene Fulton-prepped carbs and a Lenco transmission, and it promptly tore the wheelie bars off on its maiden voyage! “The car did terrible wheelstands, but I was pulling gears and having fun! The car ran great, but I still couldn’t outrun Fulton. I ran him every Sunday it seems…he had that white station wagon that everybody hated!” Flanagan laughs.

By the time Rockingham Dragway opened in 1969, Flanagan was excited to visit other area tracks. “I was at Rockingham on opening day and didn’t miss a race for 18 years!”

By the mid 1970s he had outfitted his beloved Camaro with a 454ci big block bored 60 over. “I ran big block in that car forever, before eventually returning it to a 355 small block with 6-71 blower.”

There was also a 1954 Chevy truck that’s been in the Flanagan family for eons, and it’s what Frankie and Miriam’s son, Kurt, first learned to race at Shuffletown Dragway, just as his father before him did. Kurt was only 14 years old when he first raced the truck. “He won the first race he ever entered at Shuffletown!” Frankie beams.

Kurt raced the truck for about five years, and eventually took a seat in the family Camaro and proceeded to win five championships in the PTRA 7.0 class, plus a host of other event wins. Most recently, while this story was being put together, Kurt and the Camaro once again landed in Mooresville Dragway’s winner’s circle. 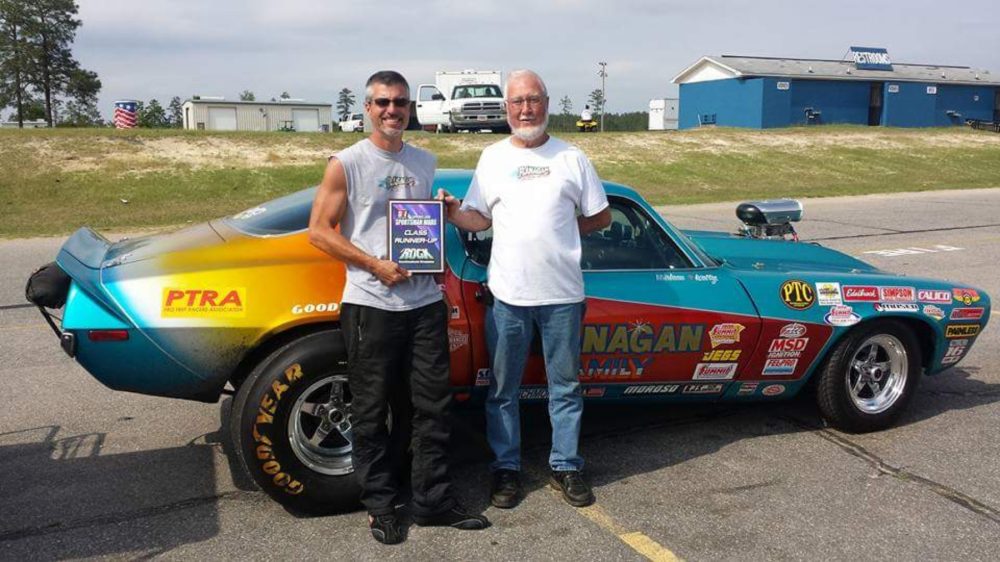 In 2022, Frankie will have owned the Camaro for a half-century, and while there’s hardly been so much as a scratch put on the car at the track, they nearly lost the car in a fire two years ago while it sat in the trailer at home.

“We had just won the race at Mooresville Dragway on Sunday and we didn’t come home until Monday morning. We were sitting at the table eating dinner when we heard this crackling sound. About that time somebody was beating on the front door, shouting ‘Your motorhome is on fire!’” recalls Frankie. “I ran out the back door and the whole side was burning, and it exploded before I could even get to it!” 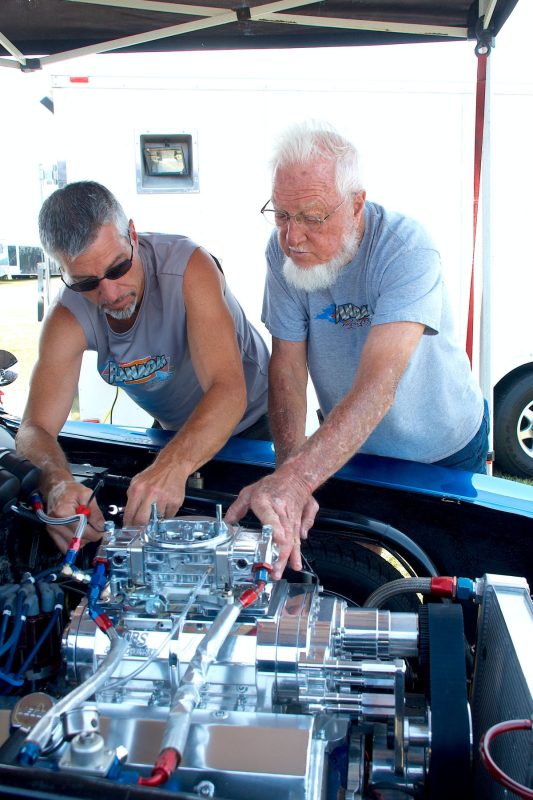 The fire department arrived within minutes and Kurt arrived at about the same time. By now the fire had quickly spread to the trailer with the Camaro inside. “We kept telling them to spray the trailer because we had a race car inside!” Kurt told them we must get the car out, but the fireman objected, saying he must first go to his truck and get his oxygen meter to check the levels to make it was safe.

As soon as he turned his back, though, Kurt sprinted to the trailer and began unhooking the car! “Another fireman actually took off his gear so he could navigate the tight squeeze past the golf cart and he helped me get the car out,” says Kurt. “Had we not done that, the car would have burned up,” Frankie adds. “Luckily, we had good insurance…we replaced the motorhome and then ordered a nice trailer from Jeff Pittman. We still have the Camaro and nobody got hurt!”

Many people have tried to buy the Camaro over the years, but Frankie won’t let go of it. Kurt feels the same way about his beautiful 1970 Nova he bought six years ago. “I plan on keeping the Nova as long as dad has kept the Camaro!” Kurt insists.

These days, the Flanagan’s are a familiar fixture at their local Mooresville Dragway, and occasionally Union County Dragway in South Carolina. Kurt’s wife, Michelle, is always by his side at the track and Kurt’s sister, Kelly, and her husband, Dwight, come to cheer them on. Frankie and Miriam save a spot in the pits for their friend’s camper.

Each week, they load up the race cars and gather up their pooch, Ozzy, and meet their kids and friends at the track. “We’ve spent many happy weekends at the track together, and it’d be hard to pick a favorite memory, but one thing’s for sure: we’re gonna keep doing it for as long as we can get up and go, and can still afford to buy diesel fuel,” Frankie laughs.