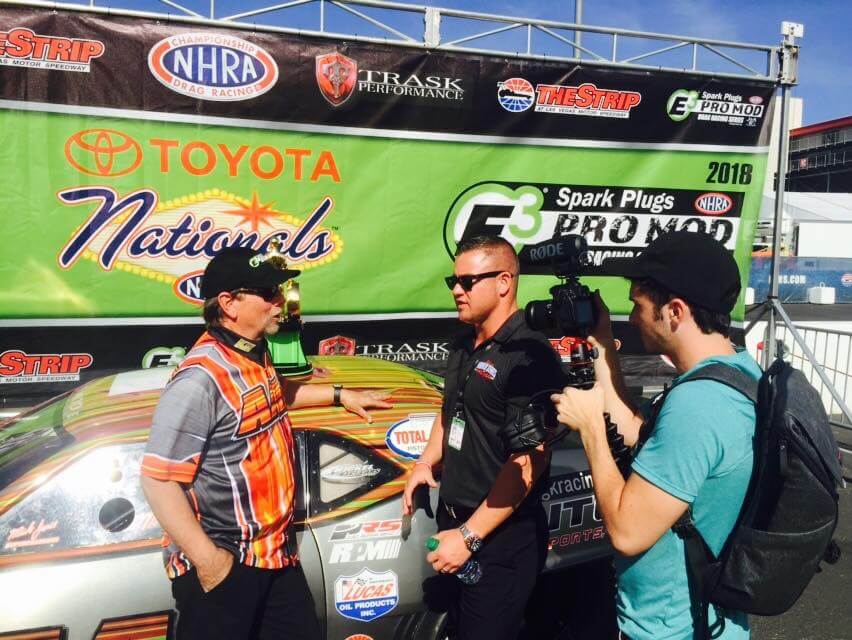 As a way to continue to offer the most unique content in the industry and continue to give drag racing fans unprecedented access, DRAG ILLUSTRATED Founder and Editorial Director Wes Buck announced today the launch of a behind-the-scenes video blog series that will appear on DRAG ILLUSTRATED’s YouTube and Facebook pages.

The comprehensive video series with Buck will give fans an in-depth, behind-the-scenes look at the popular magazine and the sport as he travels to a variety of different races, trade shows, race team shops and everything out of the ordinary at the dragstrip. After the success of the World Series of Pro Mod’s Embedded Series, which featured six vlogs on the behind-the-scenes action of the race and attracted nearly over 250,000 views on Facebook, offering further content like that became critically important for Buck.

“Since day one, it has been our mission grow and the build the sport of drag racing, and to do so by telling the stories of the incredible men and women that comprise it,” Buck said. “The people who drive these cars, that build them and work on them, and the people that make these events possible, they’ve always been the stars of the show that is drag racing, and it’s been our mission to shine as bright a light on them as possible by way of DRAG ILLUSTRATED and our print, digital and social platforms. This video blog, as well as the many other video projects we will be rolling out in the weeks and months to come, are a natural evolution of what we’ve been doing the last 13 years.”

The debut episode of the vlog series details Buck’s trip to Elite Motorsports in Winneywood, Okla., where the DRAG ILLUSTRATED Founder gets an unprecedented look at life inside and outside the Elite Motorsports’ state-of-the-art facility.

Fans will get VIP access to the ins and outs of team owner Richard Freeman’s Pro Stock and sportsman racing powerhouse, focusing on what makes the Elite Motorsports operation so successful as it jumps further into the Pro Mod world in 2018 as well. The video also documents life outside the shop for the close-knit group, giving fans incredible access to what makes the team special.

Upcoming episodes will focus on the fall NHRA event in Las Vegas, giving viewers can’t-miss access during the conclusion of the NHRA Pro Mod season, while other episodes include behind-the-scenes action the SEMA show in Las Vegas, the PRI show in Indianapolis and much more.

Every high-quality episode will be presented in a vlog-style format and will be available for viewing on Facebook and YouTube. The behind-the-scenes videos became a passion project spearheaded by lead videographer Blake Fontinel and Buck, whose popular “Selfie Videos” at races have drawn millions of views, with his weekly “Facebook Live!” show drawing tens of thousands of views each week.

“Our goal with the vlog is to simply do more of what we’re already doing, but do so in the form of an all-access, behind-the-scenes video series,” Buck said. “I’m blessed to do a lot of fun things that revolve around drag racing and spend time with a lot of awesome people, both at the drag strip and away from it, and I just want to take people along for the ride.”