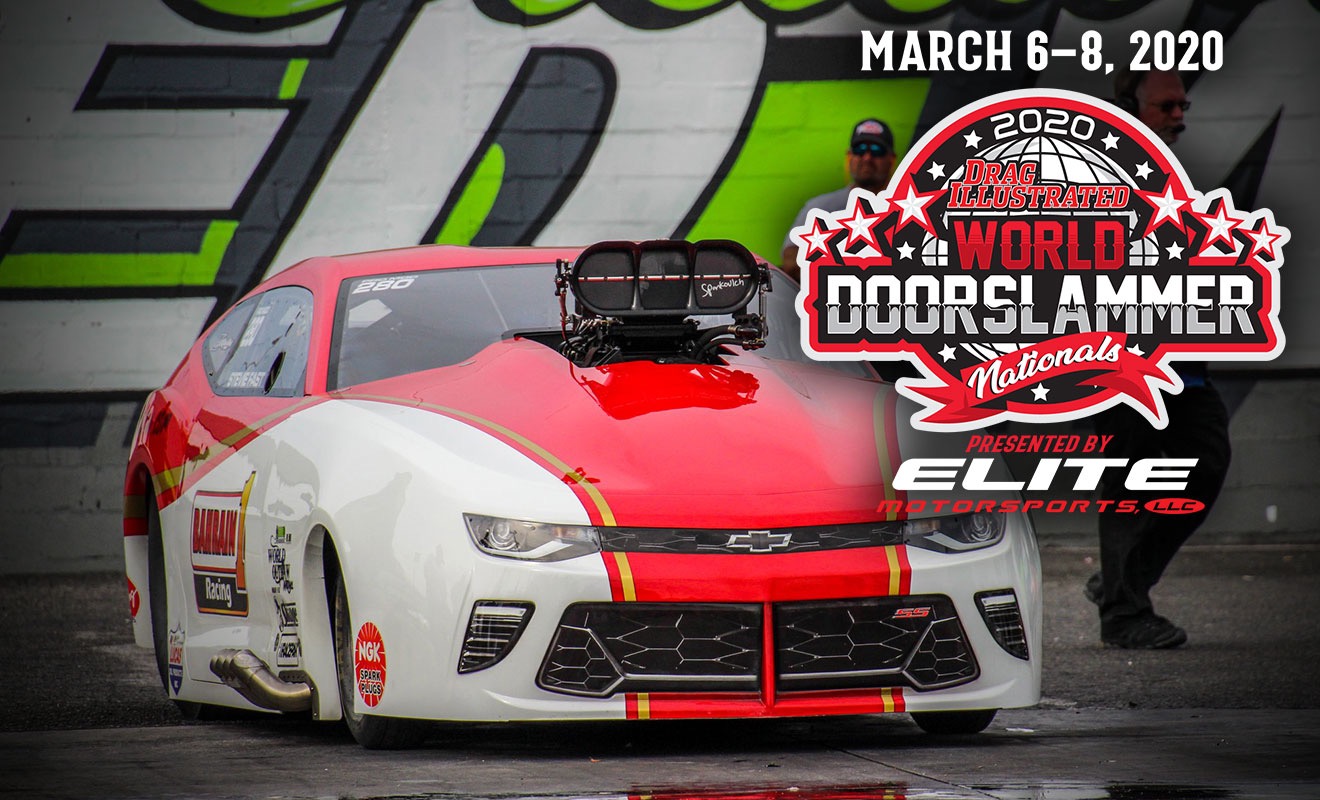 With big money on the line, Pro Stock and Pro Mod will grab the spotlight and take their place as the marquee attractions for the inaugural Drag Illustrated World Doorslammer Nationals presented by Elite Motorsports, which is set to take place March 6-8 at Orlando Speed World Dragway.

The first-time event will hand out $50,000 to the winners in both Pro Stock and Pro Mod, and a bevy of stars are expected in both NHRA classes. With the race taking place a week before the NHRA Gatornationals, the Drag Illustrated World Doorslammer Nationals presented by Elite Motorsports gives the star competitors in Pro Stock and Pro Mod a chance to start their season off right with the potential for career-best performances and a shot at a huge payday – plus a massive spotlight on two premier doorslammer classes.

“Right now today, the best drag racing happening on the planet is happening in Pro Stock and Prod mod – period. These are two eliminators that I believe are headline attractions, yet they rarely get that kind of treatment,” Drag Illustrated Founder and Editorial Director Wes Buck said.

“Well, we’re changing that. It’s a belief that started with the World Series of Pro Mod – that fast doorslammer drag racing on the quarter-mile is a marquee attraction, a standalone show – and the first-ever World Doorslammer Nationals are a continuation of that belief. This is a group of racers that are superstars, and they deserve to be treated like it – which is exactly what we’ll do the first weekend of March at Orlando Speed World Dragway.”

Buck wanted a race that ticked all the boxes for the headline-worthy drivers in Pro Stock and Pro Mod, and it’s what he intends to deliver.

“We’ve got a bad ass facility in Orlando owned by Ozzy Moya that will be perfectly prepared by Wade Rich,” continued Buck. “These are guys that truly share our vision, that want to make a difference in the sport of drag racing, and I couldn’t be more excited to give these Pro Stock and Pro Mod racers the opportunity to compete in an event of this magnitude and do it at-or-near sea-level – where they’ll make career-best passes and set world records.”

Add in a $50,000-to-win purse for both classes and it’s the making of something special for everyone, so much so that Buck is thrilled with the names already involved with the event, noting the likes of NHRA Pro Mod champ Stevie “Fast” Jackson, NHRA Pro Stock champs Erica Enders, Jeg Coughlin Jr., and Greg Anderson, Alex Laughlin, Deric Kramer and more already honed in on the race.

The payday at the Drag Illustrated World Doorslammer Nationals presented by Elite Motorsports represents a huge opportunity for drivers in both classes to start the year strong. It equals the entire championship purse in NHRA Pro Mod in just a single race and provides a thrilling scenario for NHRA Pro Stock drivers who have only competed for purse money on this level during the special shootouts of yesteryear.

“We’re not putting on a race this March,” continued Buck. “We’re making history. We’re paying the money these racers deserve to race for. We’re giving them five rounds of qualifying. We’re parking them up front. We’re pulling out all the stops, we’re rolling out the red carpet, and I expect to see people swinging for the fences. We’re going to see records sets, barriers broken, and a couple racers go home with $100,000 between the two of them.”

There will be two qualifying sessions on Friday, followed by three on Saturday before eliminations on Sunday. In the coming weeks, further details will be revealed as to additional purse money, specialty match races and more.

“A lot of drag racing history has been made at Orlando Speed World Dragway over the years,” Buck concluded. “I’m genuinely excited to work alongside great men like Ozzy Moya and Richard Freeman to keep that tradition alive. Together we’re going to change the game and it starts the first weekend in March at the Drag Illustrated World Doorslammer Nationals.”