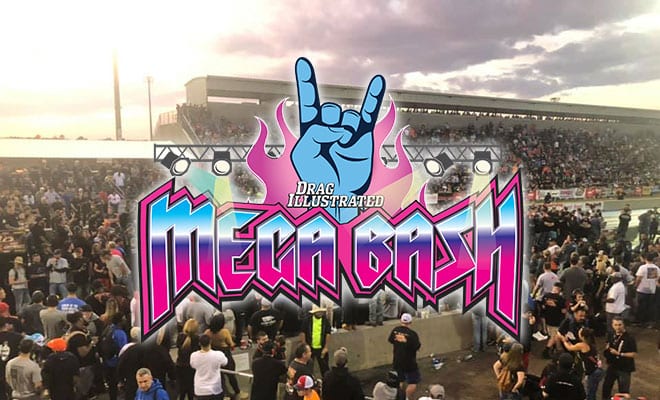 While excitement and anticipation has already reached a fever pitch for this weekend’s $101,000-to-win Sweet 16 radial tire shootout at South Georgia Motorsports Park, the event’s polarizing promoter Donald “Duck” Long and track owner Ozzy Moya have teamed with the DRAG ILLUSTRATED to turn the dial even further, bringing the first Mega Bash of 2019 into the fold on Friday night.

Teaming with longtime friend and DRAG ILLUSTRATED Founder & Editorial Director Wes Buck, Long and Moya are excited to reward their loyal following of fans and racers with a “good ol’ fashioned party” on Friday night during the event’s final qualifying rounds – complete with free beer and a live DJ.

Launched in late 2018, the DRAG ILLUSTRATED Mega Bash concept was merely an effort by Buck and company to celebrate the efforts of racers and drag racing fans, as well as show support to existing events on the drag racing schedule.

“People spend a lot of money to do this stuff, and even more time and energy,” said Buck. “It’s almost unbelievable the commitment drag racers and drag racing fans display week-in and week-out. All I want to do is make sure that they know I appreciate it, that all of us out here appreciate it. Let’s face it…they don’t have to do this. They could buy a boat, they could go fishing, they could go tailgating at a NFL game or, God forbid, go to a circle track race. The fact that all these people pile through the gates of events like Donald Long’s – amongst many others – means the world to me. It’s what gets me out of bed every morning – knowing how much this sport means to so many people.

“So, why not buy a few hundred beers, crank up the music and let all these folks know how much we appreciate them? At the first-ever Mega Bash last October at the PDRA World Finals in Virginia, I had racers come up to me with a couple ice-cold Coors Lights in their hands and tears in their eyes. They’d tell me stories about having raced for 30-years and no one ever telling them thanks for doing it, let alone buying them a beer. That’s a tragedy. We’re going to fix that. All these men and women, they need to know – without a shadow of a doubt – that we’re nothing without them. Without the racers, without the fans – this whole industry is upside down and on fire.”

“In the grand scheme of things, it’s a small gesture,” continued Buck. “It’s just a small way we can say ‘thank you’ on behalf of all of us at DI and the race promoters we partner with. As the stakes get higher and higher in the sport of drag racing, the visibility grows, the money gets bigger and the competition intensifies, we just want to do a little something to inject a little bit of fun into things. It’s pretty serious business at the drag strip these days and in a lot of ways that’s fantastic, but almost everyone at the track on any given weekend, at the root of it all, is trying to have fun. I think that gets lost, and if we can put some smiles on some faces, get some people to cut loose and lighten up, well, we’ve accomplished what we set out to do.”

With a seemingly ever-growing number of drag racing events on the schedule every year, Buck concluded that these Mega Bash events are designed to complement, not compete with existing races, which is a significant part of DRAG ILLUSTRATED’s overriding mission to grow and build the sport of drag racing.

“We branched out into event promotion in 2017 with our World Series of Pro Mod event, and we’ve been throwing our annual PRI party since well before then,” he said. “We love to put on events and, honestly, we’d love to do more of it, but I don’t think it’d be good for our industry. There’s a slew of great heads up races, great series, big money bracket races, nostalgia races and everything else that we’d rather get behind and support than to come out and compete with. Our goal with these fun little Mega Bash events is to support events and promoters that we believe are already doing an awesome job for our sport.”