Drag Illustrated’s annual women’s issue has a new name, as the “Women of Power 2020” issue was released digitally this weekend and will be mailed out this week.

Kallee Mills appears on the cover of the eighth annual issue dedicated to the women in drag racing – and 155th issue overall – focusing on the job done by incredible females in the sport who continue to break barriers, set trends and inspire others.

With unprecedented times and a public health crisis due to the COVID-19 pandemic, releasing the issue was faced with additional challenges. But a determined staff and heady leadership made it possible, as the issue has already drawn rave reviews throughout the industry.

“While the purpose of the ‘Hottest’ Issue has always been to highlight the women in drag racing who are breaking barriers, setting trends and inspiring others, the name hasn’t really reflected that. We felt it was time to come up with a name that better suited the idea behind this issue,” Drag Illustrated Editor-In-Chief Nate Van Wagnen said.

“Between putting on the World Doorslammer Nationals in early March and the COVID-19 pandemic that’s impacted the country since then, it’s been a crazy month for the DI team. But everyone banded together to put out what we believe is one of our best issues yet. It’s packed with the kind of stories and photography that readers have come to expect from DI. We didn’t cut any corners or make any compromises. Despite the challenges facing our team and our industry, we put our best foot forward with this issue.”

Along with the cover story on Mills, the “Women of Power” issue also focuses on star females in every aspect of the sport, including Top Fuel standout and record-holder Brittany Force, Alexis DeJoria, who returned to Funny Car in 2020, Melanie Salemi, Lizzy Musi, Allison Doll, Nycole Schele, Megan Lotts and Kaylynn Simmons.

The issue also looks at females looking to make their mark in the sport, such as Brooke Miller, and established names like Mia Tedesco, Kay Torrence, Randi Lyn Shipp and Valerie Clements.

It’s a thorough celebration of the females making a difference in difference in all areas of drag racing, adding another reason why it was important for the issue to be released. 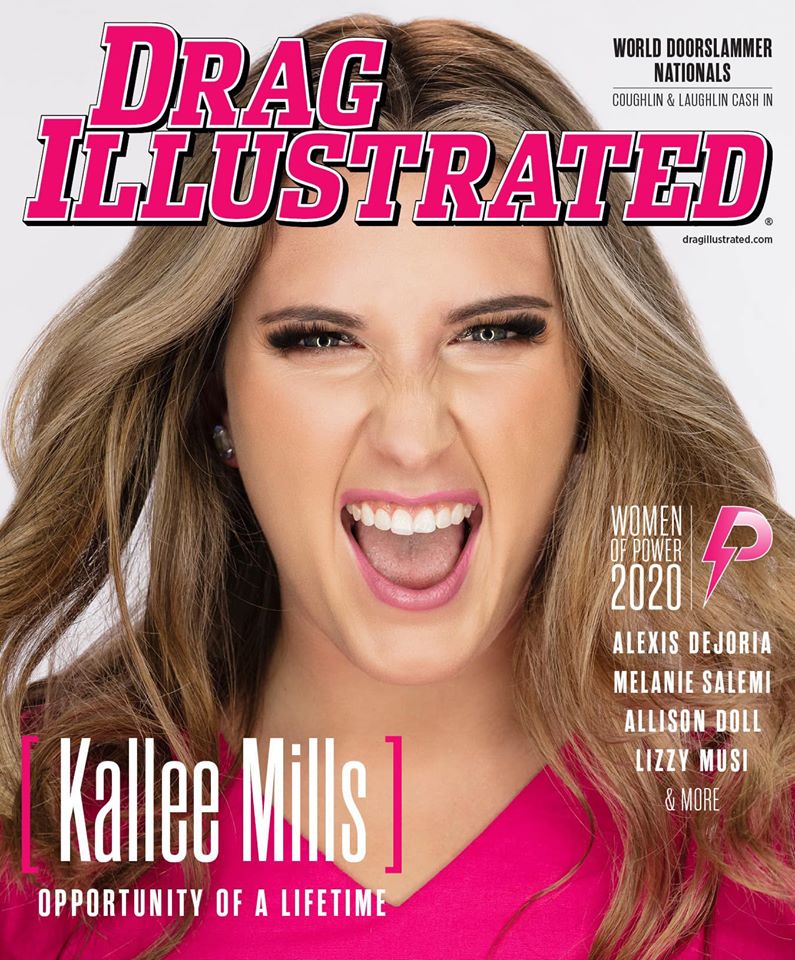 “I couldn’t be more proud of this issue and send it out in the racing world during a time when everybody needs a distraction,” Drag Illustrated Founder and Editorial Director Wes Buck said. “Our female-focused issue is far and away the most sought after issue every year.

“Our digital downloads and web traffic is always through the roof and we can barely keep up with the amount of people who want copies. We’re super proud to send out this issue. An issue like this showcases the incredible women and diversity in this sport. It’s so cool to be sending that out right now.”

Forging ahead was a noteworthy matter for Buck, who also noted the significance of renaming the women’s edition “Women of Power.” Capturing a number of inspiring stories added a degree of importance as well, especially in the midst of the trying times.

“It sends a positive message during a really trying time for our country,” Buck said. “I don’t know anyone claiming business as usual, but we are continuing to push forward and this issue is proof positive of that.”