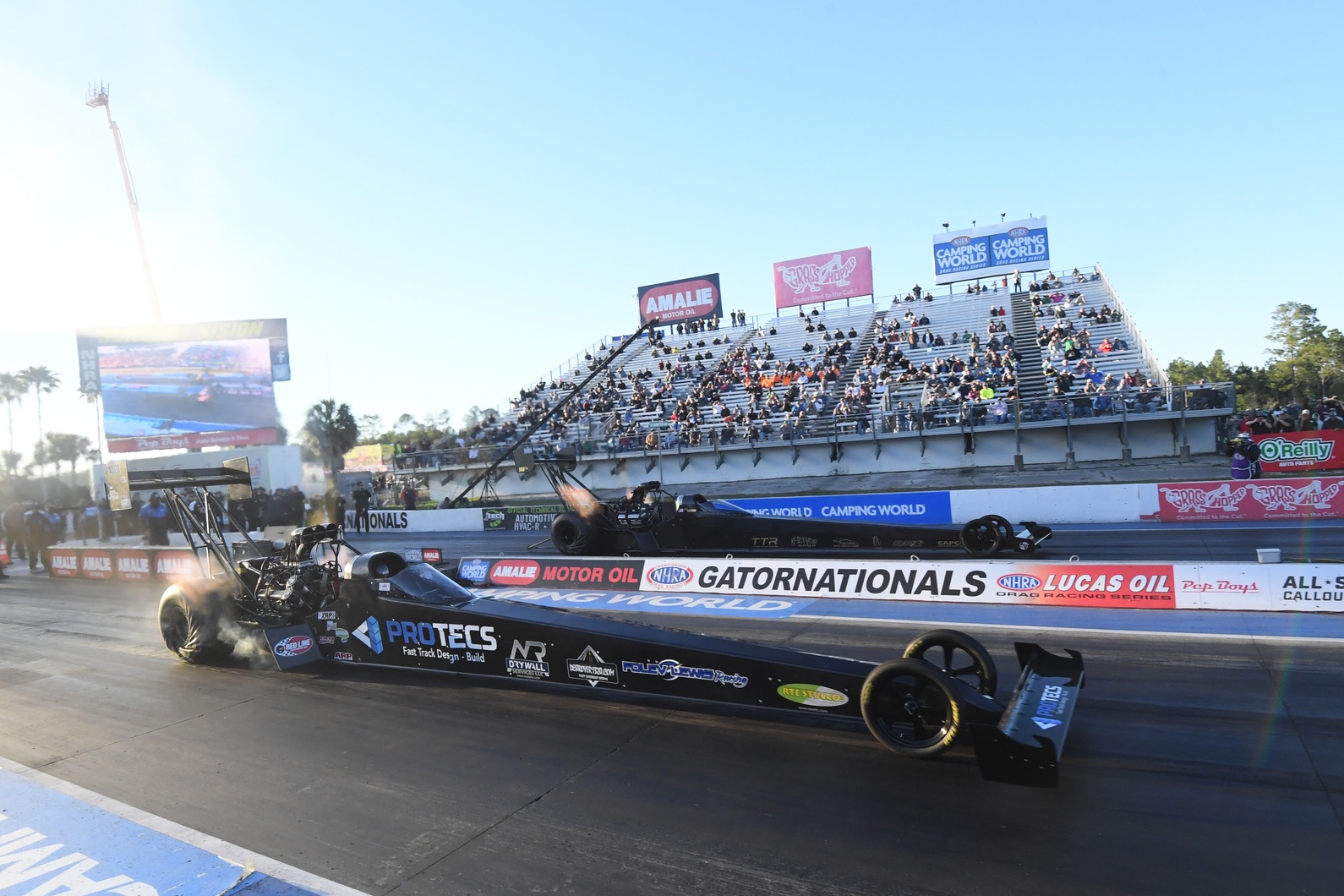 Doug Foley’s final-round appearance in Top Fuel at the 53rd annual Amalie Oil NHRA Gatornationals on Sunday was the culmination of planning, hard work, and a vision set in place by Foley and racing partner Tim Lewis years ago. When the PROTECS Inc. dragster reached the final round, it was proof that the Foley Lewis Racing team is heading in the right direction.

“To go from going no rounds at the first two races of the season to going to the finals was definitely pushing hard on the guys, but they did a great job,” Foley said. “It was really exciting for the whole team. We were one of the few cars that made it from A to B every lap, which gave us the opportunity to get to the final. We were far from the fastest, but we went down the track every time and it worked out pretty well.”

Top Fuel teams had just one qualifying session due to rain, and Foley and his Aaron Brooks-led team used that opportunity to throw down a 3.775-second pass at 313.44 mph to qualify No. 10 out of 21 cars.

“This is a team that’s been to several semifinals but had never been to a final,” Foley said. “You don’t realize how much you appreciate it until the opportunity comes along and you realize, wow, it’s not easy to get here. You start to see why you do all of this.”

A runner-up finish this early in the season is exactly what Foley and his team needed to generate some momentum going into the next stretch of the season.

“We’re not a full-time team so we’re not sitting here counting points, but to say that this Foley Lewis team is eighth in the standings is pretty cool,” Foley said. “That motivates us to keep going and keep pushing and keep going through the process that we laid out.”

Foley shared the Gatornationals success with Lewis, who joined the team at Gainesville after having to miss the first two races of the season. Foley and Lewis first partnered up in the late 1990s and enjoyed numerous race wins together in NHRA Top Alcohol Dragster and IHRA Top Fuel, competing on and off through the first two decades of the 21st century. Over 20 years into racing together, Foley Lewis Racing is on the cusp of that coveted NHRA Top Fuel Wally.

“If it wasn’t for Tim Lewis, I would’ve never gotten this opportunity years ago,” Foley said. “Even in times that we weren’t competing, we always had intentions of building something like this. It just had to be the right time. Bringing in Aaron Brooks, building a new car, moving the team to Indy – it all happened at the right time. With more time and more runs, it’s only going to get better.”

Foley was also proud of his team’s ability to help team partners like PROTECS Inc. and Red Line Oil reach potential new customers through four rounds of racing on Sunday. The late-round finish also exposed the team to new partners who might want to sign on for future races.

“We had a few one-race partners come on board for the Gatornationals – MR Drywall Services, RTE Stucco, and Destroyer1320.com – and we were able to take them to the final round,” Foley said. “We’d love to sign a season-long major sponsor, but we’re also trying to bring in more one-race sponsors to help us get to more races. We’re proving that we can provide value to sponsors, whether it’s B2B partnerships or on-track success. It doesn’t cost as much to get involved as people might think.”

The next scheduled race for Foley Lewis Racing is Foley’s home race, the NHRA 4-Wide Nationals, April 29-May 1 at zMAX Dragway in Concord, N.C.