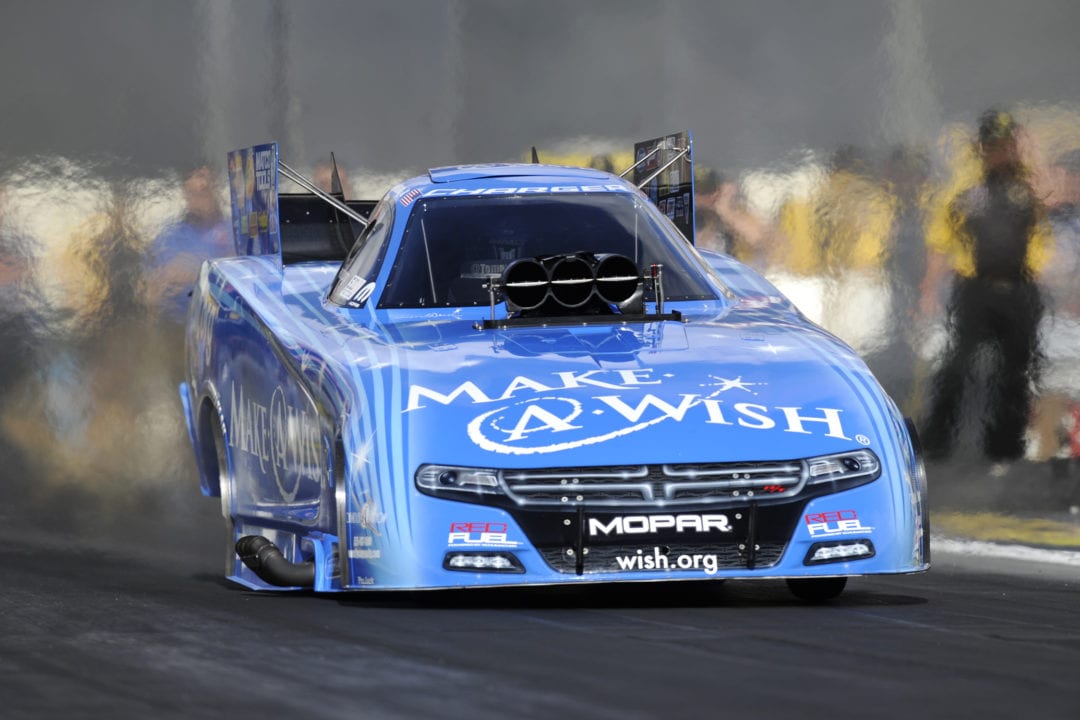 The late Terry Chandler’s dream of having a “giving car” in the NHRA Funny Car category will continue through 2020 after her husband, Doug Chandler, agreed to continue her mission and fund two Funny Cars with Don Schumacher Racing.

The Dodge Charger R/T Funny Cars will continue to be driven by Tommy Johnson Jr. and Jack Beckman in the NHRA Mello Yello Drag Racing Series and will continue to benefit worthwhile non-profit organizations. Since Terry began funding the teams in 2014, they have donated branding space to the Make-A-Wish and Infinite Hero foundations.

She started a tradition in 2013 using Johnson’s team to promote Riley Hospital for Children’s Riley Kids program during the U.S. Nationals over Labor Day Weekend near Indianapolis, and that will continue at this year’s event.

Terry was diagnosed with advanced brain cancer early this year and lost her valiant fight against the disease on July 4. She was 65.

“Terry loved her teams and I saw how much she looked forward to going to the races and help the children of Make-A-Wish and our soldier heroes who gave more than anyone could have asked and were helped by Infinite Hero when they came home,” said Doug, who was married to Terry for 49 years.

“Terry lives on in so many people’s hearts and mine. I don’t want to see her dream end.”

Terry, who was presented with the NHRA Blaine Johnson Award in 2015 for her dedication to helping others, was a mainstay at the starting line when her Funny Cars raced, and also was there for Pro Stock competition to support her nephew Shane Gray and his son, Tanner Gray.

Terry, and now Doug, will use the “giving racecars” as platforms to continue promoting awareness for great causes.

“Terry is just an incredible lady, and we’ll never know how many lives she impacted and how many will continued to be helped with Doug continuing what she started,” said Don Schumacher, owner of DSR and close friend of the Chandlers. “We miss her every day, but we’ll never forget her smile and her big heart.

“Doug could have walked away from NHRA drag racing and it wouldn’t have done anything to lessen Terry’s legacy. His decision to continue what she started for the next several years shows his love and admiration for what she accomplished.

“Everyone at DSR couldn’t be prouder of how Terry and Doug will continue to be part of our sport and help countless of people over at the least the next three years.”