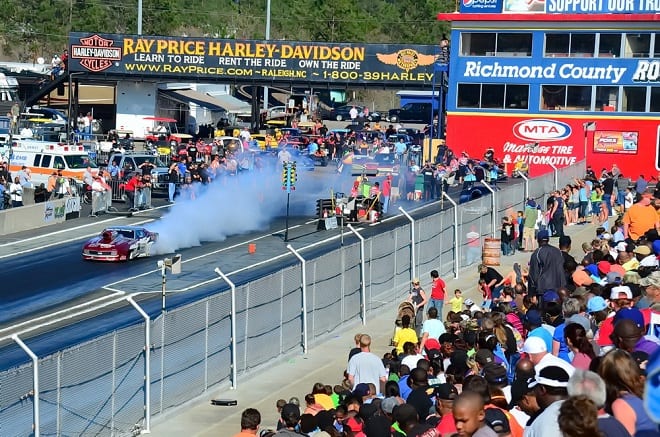 Fans heading to the Professional Drag Racers Association (PDRA) Spring Nationals this weekend (Apr. 7-9), will be treated to a rare double header as two national events will be settled at North Carolina’s historic Rockingham Dragway. Unseasonably cold weather for the PDRA season opener last month made the racing surface at Tulsa, Oklahoma, too cold to safely continue elimination rounds for the all-eighth-mile series, so PDRA officials made the tough decision to finish the event during qualifying for the Spring Nationals.

Only the Drag 965 Pro Extreme Motorcycle and Talbert Top Jr. Dragster classes were raced to completion at Tulsa. Shortly after 8:30 p.m., PDRA Race Director Bob Harris announced the PDRA’s Pro Extreme, Pro Nitrous and Pro Boost cars would complete their semis and finals Apr. 8, within qualifying for the PDRA Spring Nationals. The Pro Jr. Dragster semis and final round also will be run during qualifying at Rockingham, while the PDRA Top Dragster and Top Sportsman final rounds will be completed May 20, during qualifying for the PDRA Texas Nationals since not all remaining teams planned to make the 1,100-mile trip between Tulsa and Rockingham.

“Unfortunately, Tulsa’s loss will be Rockingham’s gain as we look forward to crowning event champions on both Friday and Saturday at ‘The Rock,’” Harris declared. “We hated having to make that call in Tulsa, but it really was just getting too cold for these 200-mile-an-hour cars to safely go down the track.” 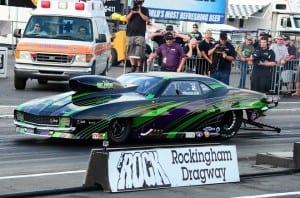 Left to contend the NAS Racing Pro Extreme race from Tulsa are defending class champion Jason Scruggs, number-one qualifier and new elapsed time record holder Brandon Snider, Dubai’s Khalid Al Rafaei and Mike Recchia from Chicago. The Switzer Dynamics Pro Nitrous semis will be determined between top qualifier Tommy Franklin and North Carolina native Jay Cox, with North Carolina’s Travis Harvey to have an unexpected bye to the final round after Steve Jackson, who would have been the fourth semi-finalist, was unable to start his car for a solo pass in the quarter-finals.

Another North Carolina driver, Kevin Rivenbark, the number-one qualifier and also the new elapsed time record holder in GALOT Motorsports Pro Boost, will be joined in the semis at Rockingham by second-place starter Melanie Salemi, South Carolina’s Alan Pittman and Canada’s Paolo Giust. The Mega Corp. Pro Juniors will conclude at Rockingham with Courtney Howard, Lance Mason, Kendal Little and last year’s class champion, Preston Tanner, remaining in the race from Tulsa. Additionally, the PDRA Extreme Pro Stock class will return to Rockingham for the first of five special appearances with the series this year.

“(Track owner) Steve Earwood and his guys make sure the eighth mile at Rockingham is always fast, so I won’t be at all surprised if we see some records broken,” Harris said. “With two races on the line that means twice as many points are up for grabs this weekend, too, so it’s a perfect opportunity for these drivers to establish themselves early on as frontrunners. I know we’re guaranteed to see some tremendous performances.”

Thursday Apr. 7th will be an open test session day for all PDRA racers, with Friday reserved for two rounds of qualifying for all classes beginning at 9:30 a.m., with one more round of qualifying for PDRA pro classes only beginning at 6:45 p.m. All remaining Tulsa eliminations will be held within rounds two and three of Spring Nationals qualifying, with the day closed out by exhibition passes from a wheelstander and side-by-side jet dragsters.

Saturday’s action will open at 9 a.m. with a final round of qualifying for all PDRA classes, followed by time trials for local bracket racers before a pre-race ceremony at 2:30 p.m., followed by elimination rounds for the PDRA Spring Nationals and once more concluded with wheelstander and jet dragster passes.

Tickets to the PDRA Spring Nationals at Rockingham Dragway cost only $10 for general admission to Thursday’s test session, with $10 daily discount coupons toward $30 daily tickets for Friday and Saturday available at many local commercial and retail outlets surrounding the track. In addition, free parking will be provided for spectators, with military members and children 12 and under granted free admission all weekend.