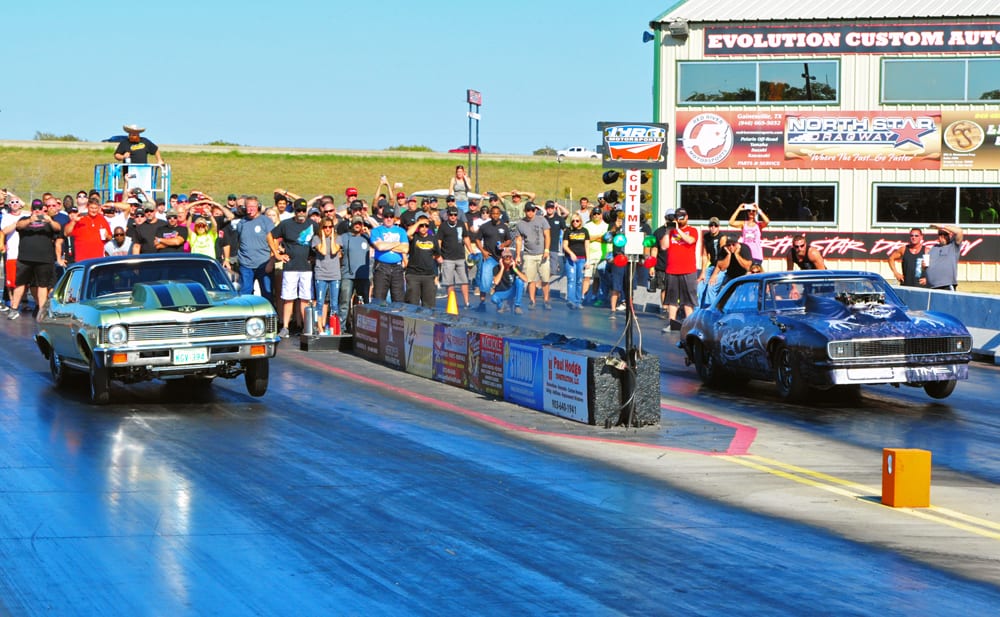 Three days of no prep drag racing mayhem unfolded at North Star Dragway in Denton, Texas on October 9-11th with four classes battling for big money and bragging rights. The third installment of the Doomsday No Prep Series brought the biggest no prep purse Texas has ever seen and attracted all the local heavy hitters of no prep and grudge racing like Spencer “Cornbread” Johnson, Tony and Randy Thorn, Eric “Big Baller Coupe” Bunton and more to square off with Street Outlaws racers like James “Doc” Love, Barefoot Ronnie, Richard Clark’s “Goat” and James Goad’s “Reaper SS” among others in their respective classes. 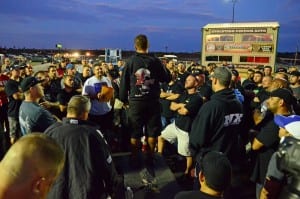 In the triple threat three-day no times shown affair, Friday and Saturday hosted elimination rounds and second chance races for True Street, Small Tire, Big Tire and Outlaw classes. Sunday took a fresh start with a shootout for the four categories and a chance for racers to add to their winnings. A great crowd packed the stands throughout the weekend with vendors, golf cart races, prize raffles and even some foot races between drivers and track owner Gene Nicodemus entertaining the crowd between rounds. Race promoters Michael Hollis and Barrett Green kept the action moving in the staging lanes as the call went out to kick off the opening round of competition on Friday night with no test hits beforehand, this was straight off the trailer and playing for keeps with random pairings drawn by poker chip.

In the Outlaw class, Shawn Wilhoit in “The Mistress” 1964 Chevy II with a 540 cubic inch twin turbo power plant mowed through the field to meet Houston resident Zachary Park in a wicked fast 2JZ powered Nissan 240SX. Park had a wild race in the semi-final against Ryan Hendrickson who lost traction at half-track then spanked the wall in his twin turbo Mustang from Indiana. In the final, Park spun the tires on the line and had the best seat in the house to Wilhoit claim the Outlaw class victory and the all cash payout to take home to Weatherford, Texas.

Big Tire attracted some serious action to North Texas with a very competitive field entered in competition for a $15,000 payday. Watching these high horsepower big slick hot rods do battle under no prep conditions was a spectacular affair as the real talent came down to who had the best driving skills. Power control and patience played a major role as drivers had to be on their game from one end of the track to the other as they battled for the win light. Local favorite Spencer “Cornbread” Johnson wheeled his 1968 Chevy Camaro with a Morgan & Son 632 cubic inch two kit nitrous system assisted entry to the final round to meet Street Outlaws regular James “Doc” Love and his 1970 Chevy Monte Carlo. The cars pulled to the burnout area and Doc immediately had issues keeping his car running as a faulty crank trigger plagued his final round appearance. After a lengthy wait, the go ahead was given to Cornbread to make a solo shot down the eighth mile to claim the Big Tire cash and bragging rights. This marked the second straight class win for Cornbread in the Doomsday No Prep Series.

Small Tire action was equally entertaining with a heavy thirty four car field of entrants hunting down the $10,000 cash winnings. Wild guardrail to centerline wheel standing action entertained the crowd as the rounds dwindled down to the last dance. Tim Oswalt made the tow from McCalla, Alabama in his 281 cubic inch powered 2003 Ford Cobra Mustang to take on local hitter Travis Franklin in his turbo charged late model Ford Mustang. Oswalt had the better car in this match up as he took down Franklin to claim his first of two class wins on the weekend, that’s right, two wins and two big paydays for Oswalt as his dominance in True Street paid off as well.

Oswalt battled through a twenty five car field of True Street competitors to meet Stefan Slisz in the “Animal” 390 cubic inch powered 1988 Ford Mustang in the final round. This one was a great drag race as the cars blasted down the eighth mile side by side through the finish line, but Oswalt had the power to hold off Slisz and claim $5,000 additional cash to total his winnings at $15,000 on the weekend. That should make the trip home to Alabama a little more relaxing and everyone in the no prep scene in Texas now knows who to keep an eye on next time they head to the starting line. Slisz racked up the runner up money in the True Street feature and scored another $1,000 cash on Sunday in the shootout when he defeated Shawn Vaught in the final, capping off a solid weekend for that team as well.

Sunday’s shootout found a combined field for Big Tire and Outlaw with a pair of Texan’s meeting in the final as Randy Thorn’s “Terminator” first gen Chevy Camaro lined up with Steve Sicking’s wickedly fast blown 1926 Ford. Sicking, who won the second chance race in Big Tire on Saturday, took a major advantage off the starting line but just ran out of ponies as Thorn drove around to claim the $2,500 cash winnings. The Thorn family wasn’t done yet as brother Tony lined up with Brian Green’s twin turbo Ford Mustang in the shootout final round of Small Tire action. Despite a quick pedal job, Thorn’s black 1984 Chevy Camaro grabbed the win light and cool $2,500 cash to cap off a long but profitable weekend for the Thorn Racing camp.

There were a lot of tire racecars and tired drivers upon the conclusion of the three day affair at North Star Dragway, but it was all smiles in the pits as another Doomsday No Prep Shootout was in the books and carnage was kept to a minimum. Spectators enjoyed some great side by side action and of course there were a few wall banging out of control passes from a few unfortunate entries. Thankfully damage was limited to just fiber glass and sheet metal and all drivers involved were uninjured except for their pocketbooks. Special thanks goes out to the staff at North Star Dragway and race promoters Michael Hollis and Barrett Green for their months of preparation in hosting this event. Sponsorship thanks are certainly due to Nitrous Outlet, Dynosaur Performance, Ace Racing Transmissions, Phil’s Trailer Sales, Sudden Performance, JC’s Dyno and Speed Shop, J&L Performance and Henchmen Racing. Expect more of the same as the Doomsday No Prep Series takes the remainder of the season off which will leave the team plenty of time to prepare for their next event likely coming in the spring of 2016 back at North Star Dragway.