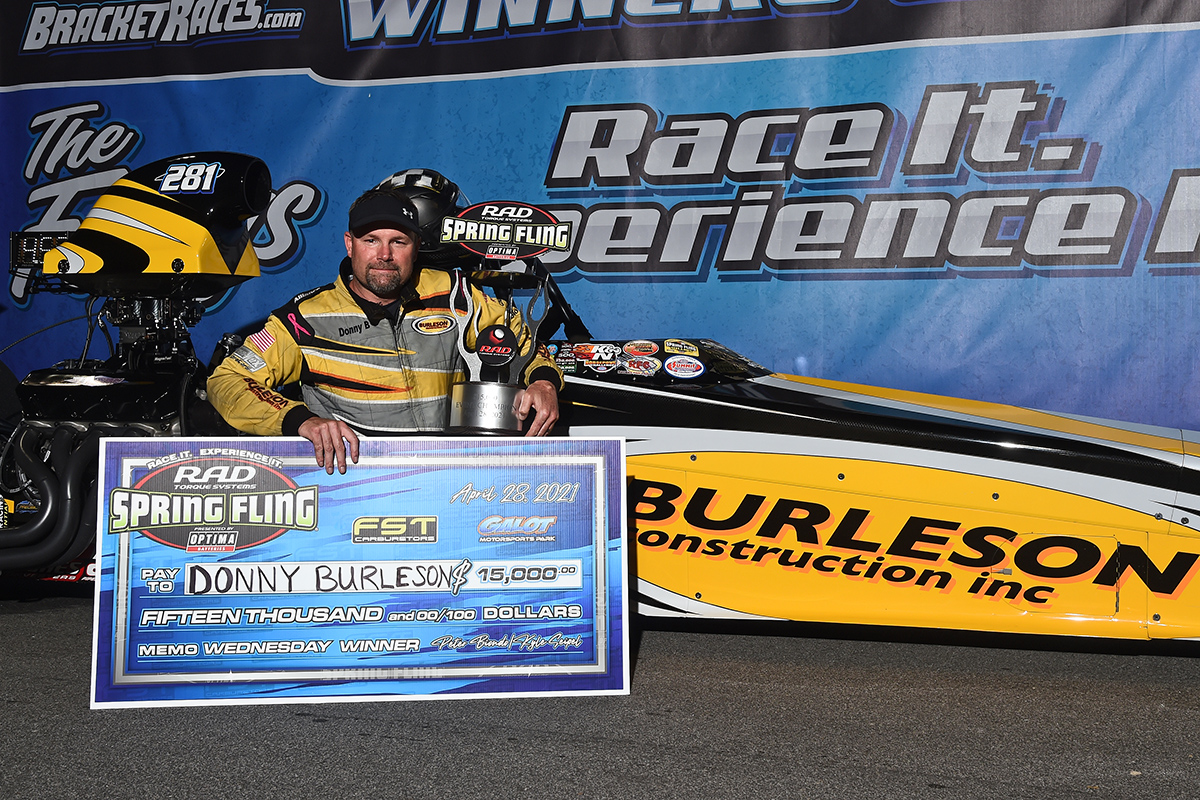 A cloudless sky and warm temps set the stage for the FST Carburetors Wednesday 15K at the RAD Torque Spring Fling presented by Optima Batteries. The second day started off with a single time run for all drivers on property.

After Clayton Roberts grabbed the big check Tuesday evening in the Mullis Race Cars $20,000 shootout, 314 Fling competitors staged up during the first round of the warm-up race to take a swing at the $15,000 up for grabs.

Gulitti had the lesser of the double breakout with Brown, running just two thousandths under the 4.51 dial. Brannon and Daymude had identical .007 breakouts which would mean the winner had to take .007 or less — and Brannon did just that to advance to round 6. Thompson used a perfect light to get the win against Saracco, while Boulia took .003 on Hicks to move on. Burleson locked out Butner with a .006 package, and Labbous fought off Ezell with a .008 light and taking .006. Finally, Bodnar defeated Albrecht by laying down .011 total.

Eight drivers returned for the quarters and the first pair was decided by the redlight of Boulia that would move Burleson into the final four. Gulitti advanced by way of Thompson’s two-thousandths breakout, and the story was the same for the following pair. Bodnar’s .005 breakout granted Brannon a place in the semifinals in the lane opposite Gulitti. The last match of the round saw Labbous tighten it up on Dauber by .004 to face Burleson.

Gulitti and Brannon had a .004 spread on the tree, Brannon having the advantage. The result was a double breakout, Gulitti by just one thousandth and Brannon by three. Brannon took .006 needing to take .004 or less to move on, so Gulitti would go on to make up half of the final round. Burleson’s .000 gave him a two hundredths advantage on the tree over Labbous and full control of the round to meet up with fellow Texan Gulitti.

Two RAD Torque American dragsters pulled up to contest for the $15,000, both machines equipped with Wilson Racing Engines and Abruzzi transmissions and converters. Burleson was .002 and .010 above, taking .002 on Gulitti’s .008 and “dead-on” six for the FST Carburetors Wednesday 15K Warm-Up victory.

On deck is JEGS Performance 25K Thursday which kicks off with a ‘New Entry Time Run’ at 8:15 a.m. To follow is Silver State Refrigeration 100K Friday and Wiseco Performance Products 25K Saturday.