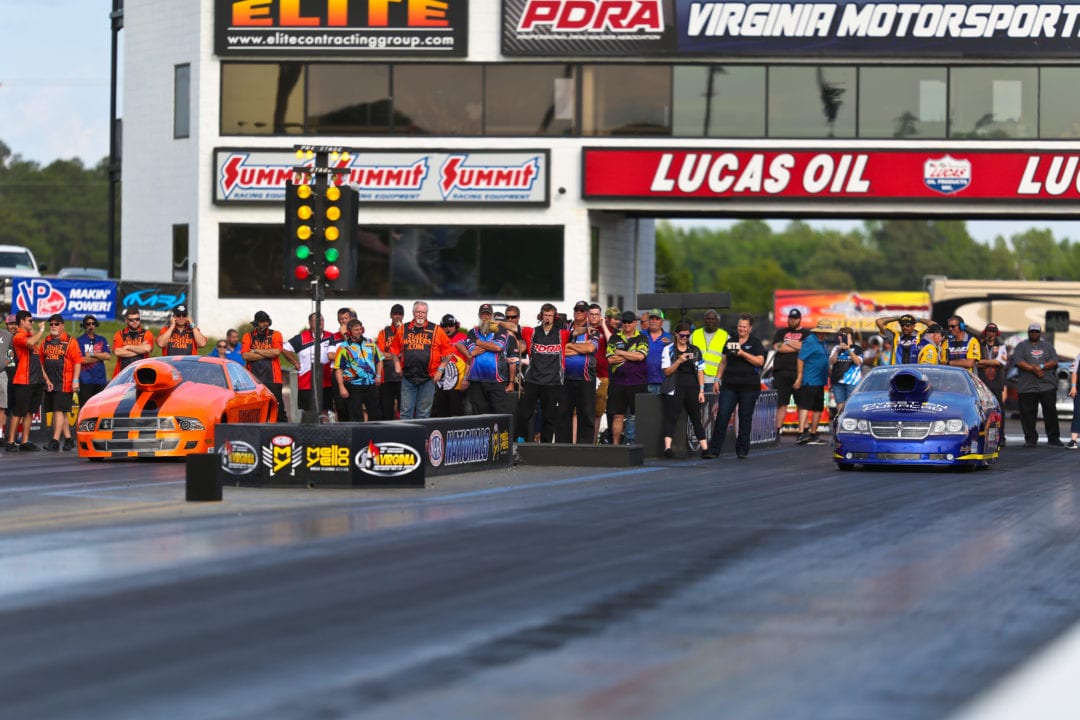 Combined, it turned into the longest burndown in Extreme Pro Stock history on Saturday at Virginia Motorsports Park during the PDRA’s Mid-Atlantic Showdown presented by Modern Racing.

In all, the starting-line duel lasted an almost-incomprehensible 4 minutes, 26 seconds before Dobbins finally staged. Pluchino followed, but Dobbins won on a holeshot, as his 4.16 at 172.92 mph beat Pluchino’s 4.12 at 176.26.

Dobbins said he was simply keeping a promise that started at the PDRA opener at GALOT, where they met in the semifinals. Dobbins staged first, but Pluchino, who contends that Dobbins tried to rush him by going in fast, was quicker off the starting line and eventually won the event. Dobbins vowed that wasn’t going to happen again.

“John is a great guy and great racer, but he always stages last. He did it at GALOT and I told him if we run again, I’m not going in so he better be ready,” Dobbins said. “Sure enough, the next race we had John. We were ready. The car was topped off with fuel and we had the car as cool as we could before the race. And then we sat.”

In fact, if it lasted much longer both cars were going to run out of gas. That was besides the point for Pluchino, whose “stubborn Italian” antics had fully taken over at that point.

Gas or no gas, he wasn’t going to stage.

“I wouldn’t even look at the gauges,” Pluchino said. “I didn’t want to know.”

How close was he to running out of fuel?

“If it was a quarter-mile race, the car would have shut off,” Pluchino said. “But when I get in that zone, it doesn’t matter.”

That Pluchino was involved in the epic burndown should be no surprise.

He went a little over three minutes with Doug Kirk on a starting-line duel in the ADRL in 2013, again a nod to his stubborn roots.

Both laugh at the notion that this could have possibly been staged. Rather, it was two drivers sticking to their guns. Dobbins relented after the four-minute mark as a round win finally took precedent, but he was more than willing to put on a show even as it took a toll on his body.

“It was pretty cool,” Dobbins said. “Our racing is so technical, this is something the fans can get involved in. The starter wanted us to go a couple times, but I said no way. I’m glad (PDRA) let it play out. But those clutch pedals are hard to hold down for that long. My leg was going numb.”

Dobbins initially thought the burndown lasted around two minutes – a sign he was locked in on the moment – before he was told otherwise, while Pluchino knew he was in unprecedented territory.

His body agreed with him.

“It feels like an eternity in there,” said Pluchino, who won the opening PDRA race of the season. “My son was yelling at me on the radio and I’m sitting in the car with my foot on the clutch. It’s boiling hot in there and it’s not easy, but I wasn’t going in.”

Pluchino figured after the race at GALOT that Dobbins would have something in store for him, though neither expected it to reach the levels it did in Virginia. But it turned into an entertaining four-minute clash, there were no hard feelings afterwards and neither car was damaged. It was the perfect scenario for Pluchino – almost.

“It gets the fans involved and gets them upbeat and excited,” Pluchino said. “In the car you can’t hear anything, but after the fact I was told the fans were going nuts. I know they love that kind of stuff every once in a while. But it’s all good fun. It would have just been better if I won.”

That ultimately gave Dobbins the last laugh in a memorable matchup that will be replayed for years to come. He wasn’t planning it that way, but Dobbins will gladly take the piece of history with him.

“I needed a round win and that’s what it took. But that was crazy,” Dobbins said.