“It’s no secret that I’ve been planning on exiting the driver seat. With the increasing demands of running the business, that time has come, Vandergriff said.

“I’m excited about my new role and it’s actually recharged my batteries. I’m thrilled about the new direction for BVR. We have a three-time world champion in Larry Dixon and I’ve been able to hire someone who I consider one of the best natural drivers in the sport, Dave Connolly, to take over for me.”

Vandergriff began driving a Top Fuel Dragster in 1994 and was voted Rookie of Year in his first season in the NHRA. While making the final round several times, Vandergriff’s first NHRA win eluded him until 2011 at the Texas Fall Nationals in Dallas. He now has three wins and 17 final round appearances under his belt.

“I want to thank Josh Comstock and the entire C&J Energy Services Team for all their support of BVR over the years and their continued sponsorship as Dave and Larry begin a new era for our racing program,” Vandergriff said. 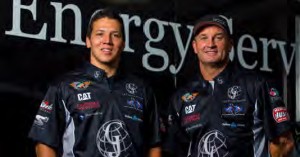 Connolly makes the jump from Pro Stock where he is currently third in the standings, only 51 points behind leader Jason Line. Connolly has had a very successful career in racing. He has 25 wins in Pro Stock and four as a sportsman competitor. He became only the fourth driver in drag racing history who has won five consecutive NHRA Pro Stock events. He has been to the final round 47 times. Besides Pro Stock, he also drives the GMPartsNow.com COPO Camaro in Stock Eliminator at selected races.

“It’s kind of crazy. I’ve never really thought about driving Top Fuel, mainly because the opportunity wasn’t there. When Bob approached me, it really sparked my interest,” said Connolly. “Top Fuel is the fastest car on the planet. I’ve driven everything else, so I’m up to the challenge.

“I’ve been driving a Pro Stock car or working on one since 2003; it’s what I have lived. It’s going be hard to step aside from all that and the people I’ve worked with but at the same time, it’s a great opportunity for my future in drag racing.”

Dixon came to BVR earlier this season where he has been driving a second Top Fuel dragster on a part-time basis. After getting his top fuel license in 1994, Dixon went on to win 62 NHRA races and capture three NHRA Championships. He has competed in 108 final rounds.

“As I’ve said before, I am thrilled Bob gave me the opportunity to drive his car and I am happy we have been able to qualify consistently in the top ten and contend for round wins and race wins. Being part of Bob’s team has made racing fun again,” Dixon said.

“It’ll be great to have Dave as a teammate. He is such an accomplished racer I would expect him to take to fuel racing like a duck to water.”

As for looking ahead to 2015, Dixon added, “It’s been a few years since I’ve competed for a Mello Yello Championship and I’m looking forward to the full tour with Bob’s team. He has great equipment and has assembled a talented group of guys and I feel honored he wants me to be a part of it.”