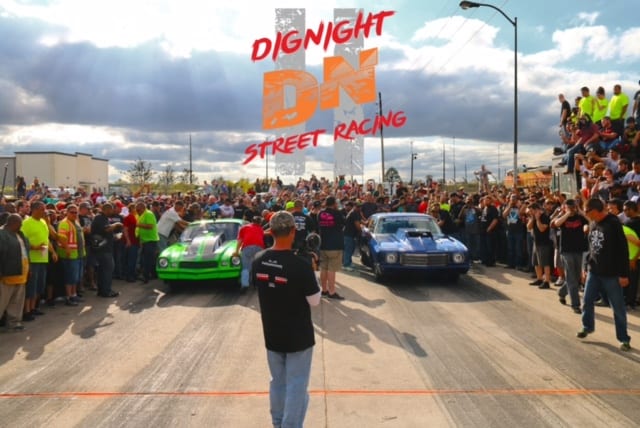 DigNight Street Racing LLC has partnered up with Tucson Dragway and Arizona No Prep Racing to bring the very popular racing series known as DigNight to Tucson Dragway in early 2018.

“We are super excited to announce DigNight Tucson,” said Doug Johnson, official DigNight announcer and promoter. “Jim Hughes has been trying to figure out a way to get us out to his facility for a couple years now and the timing couldn’t be better. The Southwest portion of the country is ripe for a show like DigNight and we really appreciate the opportunity to work with Arizona No Prep Racing at Tucson Dragway.”

DigNight will bring their standard fair of classes including Big Tire, Small Tire, True Street, and Factory Street, along with the 5.80 and 6.50 index classes that they are famous for providing at other facilities. DigNight will also bring to Tucson Dragway the Friday Night Cash days classes it created in 2016. They are also working with Matt Frost of Denver, Colorado, to bring some of the racers from the famous Rocky Mountain Race Week for a special “boards lit” exhibition classes to help keep the spectators entertained between rounds.

“After watching no prep race events for the past two years, it’s time to take Arizona No Prep to the next level. Traveling to Texas, Mississippi and Louisiana to watch how organizations like Shannon Morgan’s Redemption Series and Mike Murillo and Scott Taylor’s Dirty South No Prep events ran was awesome. Our goal was to follow in their footsteps. Doug Johnson noticed my interest and thought, ‘What was Jim Hughes doing here?’ After hearing his passion as an announcer and getting to know Doug better, I’m impressed. I love what he brings to the table as a promoter and announcer for DigNight,” said Jim Hughes.

Well-known racers who have committed to attending DigNight Tucson are David “Bird” Jones and The Bird Boyz from Discovery Channel’s show Street Outlaws New Orleans along with “Boddie” from California, Matt Frost from Denver and “Barefoot” Ronnie Pace from Texas.

“I’m in,” said Wes Buck. “If Doug Johnson and Jim Hughes are involved, I’m there and I’m bringing my family with me to Tucson.”

“I met Doug Johnson at the Drag Illustrated World Series of Pro Mod and we worked hard to find a date that wouldn’t conflict with organizations and give all the no prep racers a chance to come run together,” DeYoung said. “Doug and I also spoke about how DigNight could help promote the Arizona No Prep Group, which is a group of Arizona racers that have started a great no prep series in Arizona, which runs with us at Tucson Dragway.”