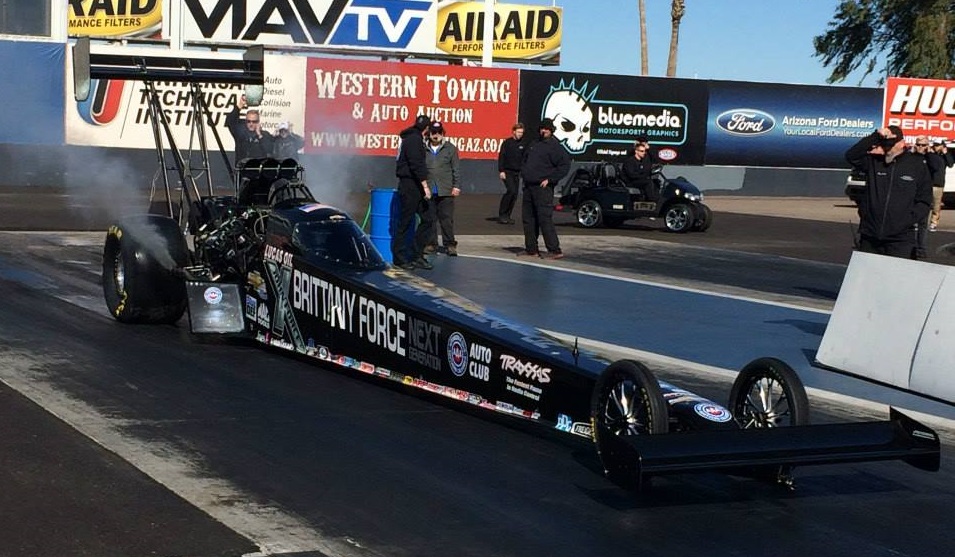 The test session was comprised of mostly Funny Cars on the Pro side, but it was the Top Fuel dragster of Brittany Force that garnered the big headline of the week when the middle Force daughter ran a 3.698 at a negligible 321.88 MPH.

“Testing was definitely a challenge. Not just for the driver but for the whole team. I’ve been out of the seat and out of my routine for a few months so it takes some time. We have a new team and some new guys but I am excited. We jumped back into it and got off to a tough start but we got it turned around. Once we got it running it seemed to fly,” said Brittany Force. “We ran 3.80 with an early shut off and then we ran 3.69 in great conditions. Running in the 60s was awesome and I am excited and proud of that. That is something I have always wanted to do. We closed out testing with a 3.76 in the afternoon so I know we have a good set up to go to Pomona.” 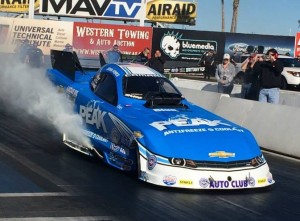 All three JFR Funny Cars were in the threes at various points during the four-day test.  John Force was the quickest Funny Car driver of the weekend with his 3.971, followed by team president Robert Hight’s 3.976 and Courtney Force’s 3.980. John and Robert each made an additional three-second run of 3.985.

“This is the most successful test session we have ever had especially to start a season. I think a lot of it has to do with coming to Phoenix. The folks at Wild Horse Pass Motorsports Park have done a great job getting it ready for us. We had great conditions. I went six out of eight runs with very respectable runs. I am pleased with the overall effort,” said Robert Hight. “We had a chance on the last run to step up and maybe run quicker but Mike Neff made the decision to make a nice safe run and it still ran 3.98 seconds. It was the fastest speed I have ever run almost 324 mph. We wanted to end on a good note. I am proud of all the teams. We have four great teams.”

Independent Funny Car drivers Cruz Pedregon and Tim Wilkerson also attended the test. Pedregon was breaking in a new car for 2015, making a best run of 4.01 at 313. Wilkerson made a pair of 4.04/313 MPH runs before deciding his LRS team is ready for Pomona. The husband and wife team of Terry and Jenna Haddock was on-site to make a few runs with Terry’s Funny Car and Jenna’s Top Fuel dragster. 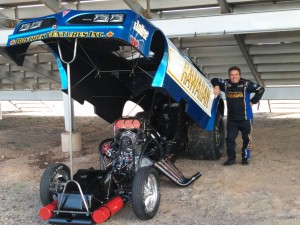 For more coverage from the Phoenix preseason test session, check out Arizona Auto Scene, one of the only media outlets allowed at the private event.