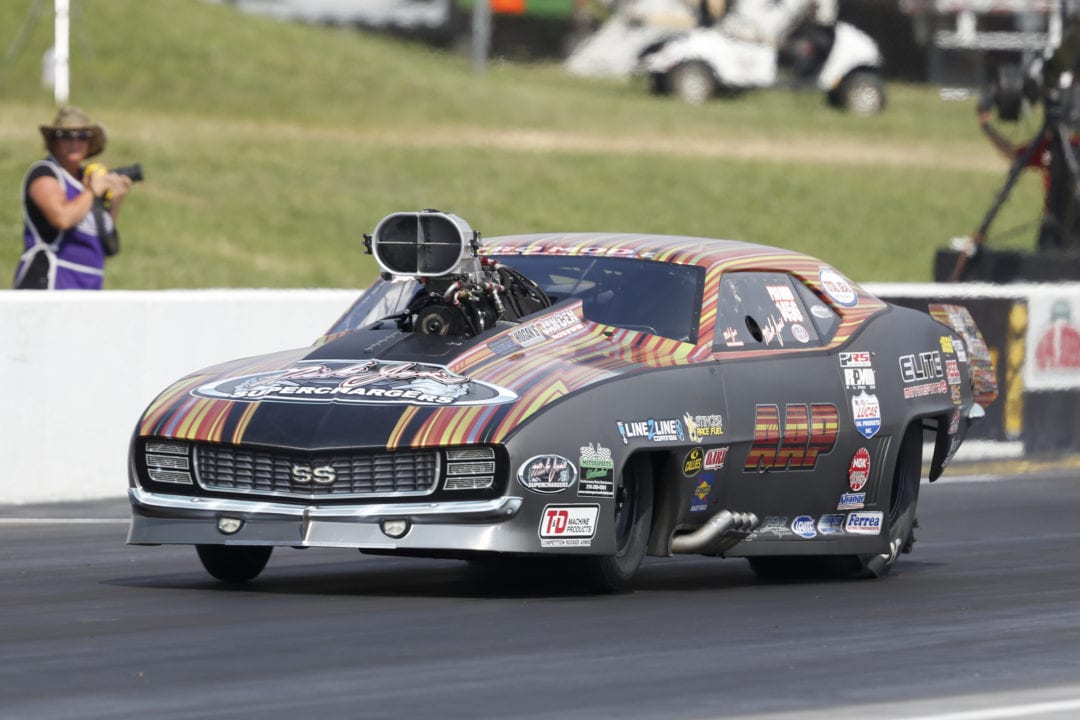 It all comes down to this. Either Mike Janis or Rickie Smith is taking home the 2018 NHRA Pro Mod title in what has been Pro Mod’s biggest and best year yet. We’ve seen phenomenal runs, record-breaking performances and unreal participation as the NHRA Pro Mod class continues to lay its claim as the most exciting category in drag racing. But it’s either going to be Janis, who has a 24-point lead, or Smith standing tall with the big check at the end of this weekend’s race in Las Vegas.

With a championship on the line during a banner season, Drag Illustrated answered the question of how they see this going in Vegas, a lasting memory of the 2018 season and what’s next for a class on such an incredible ascent.

QUESTION: How do you see this playing out for Mike Janis to win his first championship?

Nate Van Wagnen: I think this is Mike Janis’s year to finally pull it off. But he leads Rickie Smith by just over one round – hardly an easy lock-up situation. Given Janis’s consistency and ability to avoid early exits – he has one first-round loss, while Smith has four – I’d say he has a good shot at maintaining his lead.

Josh Hachat: Janis believes he’s learned from what happened three years ago when he was the points leader heading to Vegas only to lose to Troy Coughlin. That year, the team strayed what had worked all year and it’s a lesson learned for this scenario. Janis will keep that same consistent, aggressive mindset and if he wins the first round, I believe the title is his. Smith is the G.O.A.T in the class, but not dueling with a turbocharged car in Vegas also helps Janis.

Wes Buck: I think Mike has his hands full, to be honest. As much as I want to see him win, we’ve talked about how hard it is to race out front. We’ve seen teams in all venues struggle to maintain their edge or aggression when they’re ahead. For Janis, it’s going to be interesting to see if he’s able to maintain that margin and successfully race with a lead. Rickie is extremely hard to bet against in this game of poker. You back Rickie into a corner, whether you’re a Pro Mod racer or grizzly bear, it’s hard to bet against Rickie Smith. We’ve seen Pro Mod championships come down to the wire many times in Vegas. Last year with Troy (Coughlin) and Mike (Castellana), it was one of the most electric moments I’ve been a part of. Somehow someway, my hope is we see these two line up in a do or die, blower versus nitrous matchup. You can’t really ask for more than that, having two legends, who have had two tremendously successful careers line up and decide the championship.

QUESTION: In this Golden Age of Pro Mod, how big would it be for Janis to win his first NHRA title?

Nate Van Wagnen: A world championship is always a huge accomplishment, but it could be argued that a Pro Mod championship has never meant as much as it will this year, regardless of who wins the title. Any of the 16 cars that qualify for an NHRA Pro Mod race are capable of winning, making it that much harder to rise above the rest.

Josh Hachat: This would definitely be the crowning achievement for Janis, who has experienced a wealth of success in the class over the year and different organizations. But Pro Mod has never been this competitive, had this many heavy-hitters and made so many mind-boggling runs as it did in 2018. That means something and, for Janis, it would be a beautiful bow on his great career. After coming so close in 2015, doing it now would be truly special for Janis.

Wes Buck: Pro Mod has never been more competitive right now. A championship in 2018 means everything to any one of these guys. This is a class of drag racing that has swallowed up and spit out many a top-tier competitor. To win now in this day and age, with the parity that exists, I don’t know if there’s a higher honor, other than winning the WSOPM. To win a championship right now in 2018, don’t believe there’s a greater challenge that exists. The coolest thing is, everybody knows it. In doorslammer drag racing, this is absolutely the final frontier.

QUESTION: How does this scenario go for Rickie Smith to get a Fourth Pro Mod championship?

Nate Van Wagnen: If anyone is suited to come from behind and steal the lead away from Janis, it’s Rickie Smith. He’ll be there to take advantage of any mistakes made by the supercharged hot rod out of Buffalo, New York. However, he can’t make any mistakes of his own. Plus, the conditions in Las Vegas don’t exactly favor nitrous cars. In a field full of killer turbo cars and the quickest and fastest blower cars in history, Smith will need to be on his toes.

Josh Hachat: Like Nate said, Smith knows full well how to pull a rabbit out of his hat in these situations. Nitrous cars and Vegas usually don’t mix, but Smith won’t have to deal with it being a turbo car in front of him. That helps, but Smith needs a big showing in a season that’s been all or nothing for the three-time champ. He has three wins, but has four first-round losses. If he gets by first round this weekend, it could go down to the wire and there’s not many better than Smith in those situations. Be ready for his full bag of tricks and let’s just hope the Pro Mod Gods have a head-to-head matchup in store for us.

Wes Buck: I venture to say that Rickie is really comfortable right now. It may not feel like it, but this is not an unfamiliar place for him. It’s a comfortable place for him, and he’s got a shot to win this deal. There’s some magic in that camp, too. With that small team, there’s less guys you have to convince to buy in. There’s some magic to being in the foxhole and Chad (Hester) and Rickie are going into this weekend like it’s them against the world, and I don’t think they would have it any other way. Can Mike Janis shake off that bridesmaid finish? There’s a lot at play here. Drivers are more a factor than they’ve ever been. If you’re not .030 or better, you’re going to get left on. These guys are all killers. You can’t be average on the tree and make it up on the scoreboard. You’re going to have to pare together record-setting performances and be great on the starting line. I honestly want to see Mike win, but he’s got his hand full.

QUESTION: It’s been such a tremendous year for Pro Mod in 2018. What’s your lasting memory of this season?

Nate Van Wagnen: I only have to think back a few weeks to the Carolina Nationals at Charlotte as my most memorable event. Fourteen of the 20 quickest runs in NHRA Pro Mod history were recorded during the event, plus it was won by first-time victor Rick Hord. He proved that you don’t need to have the thickest logbook or fattest wallet to be competitive in 2018 NHRA Pro Mod racing.

Josh Hachat:I agree that Charlotte was just about as thrilling as it gets, but for me, the highlight was Stevie “Fast” Jackson winning in Indy. To go from the No. 29 qualifying position – next to last, mind you – heading into the final round of qualifying to the winner’s circle at the biggest race of the year was storybook stuff. And that’s coming off of two straight DNQs earlier in the summer that left Jackson searching for answers. But the legend of Stevie Fast grew a great deal that weekend in Indy as he mowed through eliminations and that’s going to be remembered for a long time.

Wes BUCK: My lasting memory is a sense of pride. It’s my belief that Pro Mod universal language of drag racing. To see these guys hang tough, the guys that have stayed the course, guys like Stevie going from DNQ to winning back-to-back races, there’s just an overall sense of pride. These guys are real-deal racers and they deserve all the excitement and fanfare they’re receiving. It’s never been harder to do it, and there’s never been a better class of drivers. It’s really incredible to think that Pro Mod has arrived at a point where there’s this type of competition. It’s incredible. It’s a double-edged sword and there will be casualties in NHRA Pro Mod, but it’s going to be exciting and a fun thing to watch for a good while.

QUESTION: Where does the class go from here? Can it continue to get better?

Nate Van Wagnen: A short 21-car field at the Carolina Nationals was cause for concern, but as of Wednesday night, 30 cars were on the Toyota Nationals entry list and committed to making the tow out to Las Vegas. I believe the class will continue to see packed fields and quicker and faster performances, especially as newcomers like Marc Caruso and Scott Oksas increase their participation.

Josh Hachat: How much higher can the bar be raised? The class reached astronomical levels this season, twice setting the quickest qualifying field in class history at the past three events. That level of performance can’t possibly be maintained, can it? But even if that stays status quo, I feel like the class is in good shape simply because it’s the place where everyone wants to be. Check out all the first-time winners the past two years. Hord’s win in Charlotte made it nine first-time winners since 2017. That number is only going to grow and that’s exciting because it tells me the interest in the class isn’t slowing down.

Wes Buck: It’s leading edge or bleeding edge. We’d be lying if we didn’t acknowledge that when it gets to this level, there’s nowhere to go but down. But I can sense the NHRA’s ever-increasing appreciation for Pro Mod, what they bring to a national event. You’ve got to have the pits full of trucks and trailers, teams that look professional and play the part of pro-level racers. I think we’ve still got some years of growth ahead of us. When you see the likes of Elite Motorsports arrive in the class, it makes you wonder what’s going to be the next shoe to drop. Where does all of this go? What 2019 looks like is very interesting, but I believe Pro Mod is headed to the moon and it deserves to be. This is the best drag racing has to offer and exactly where Pro Mod should be. But if you look to 2019, if you don’t have your shit together when we get to Gainesville, you’re already going to be behind.