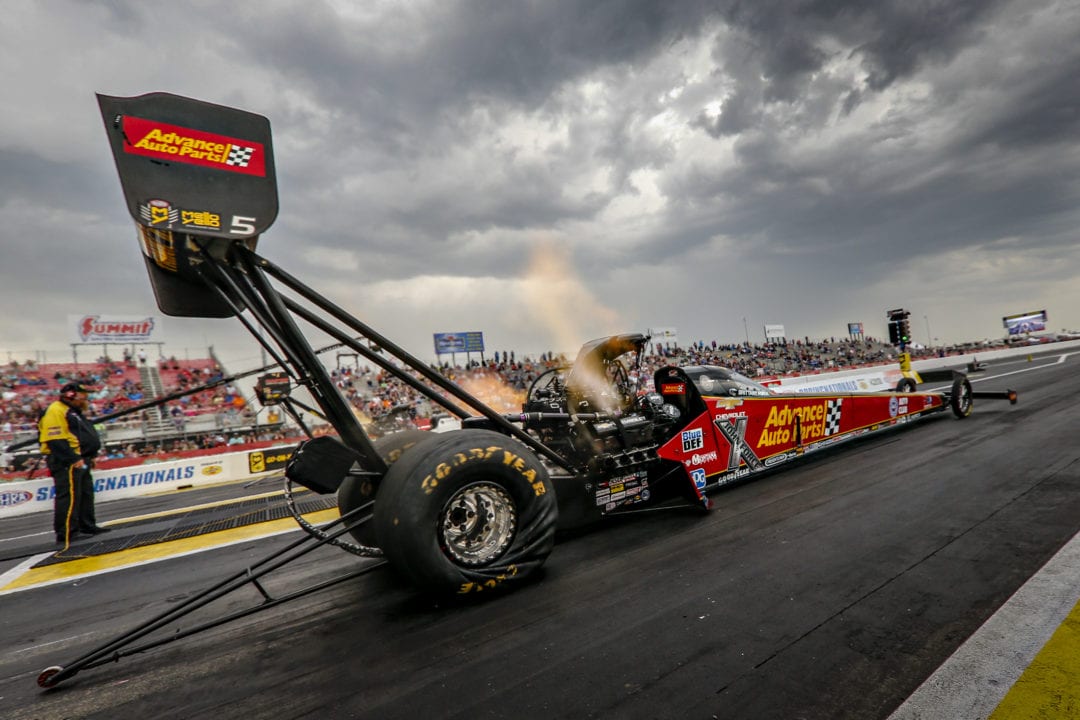 You could understand if Brittany Force’s head never stopped spinning this off-season. First, it was bringing in a new team, led by David Grubnic and Mac Savage, who do things decidedly different than what Force had experienced in recent years with the likes of Brian Husen and Alan Johnson.

Then there was the retirement of Force’s sister, Courtney, leaving Brittany as the lone Force daughter still competing. It was, without question, a different feeling heading into the 2019 season, but Brittany has always blazed her own path, from jumping into Top Fuel – becoming the lone Force to do that – to carving out her own unique personality in the sport.

That serves as a nod to her inner strength, which was certainly tested this off-season. But Force and her team are now thriving and that was evident in Houston, where the 2017 Top Fuel champ won for the second straight year.

The big headlines came in the form of the JFR Racing sweep at the race, as teammate Robert Hight joined Force in the winner’s circle, but it was another impressive example of how Force manages to roll with the punches and thrive when adversity comes her way.

“Coming into this season with all of the changes, that’s a lot to wrap your head around. Really it’s about finding a routine,” said Force. “I knew it was going to take us awhile but we started turning a corner in Gainesville and that’s where I screwed up. We had a good race car. Then we went to Vegas and were runner-up so I knew things were turning around. It just takes time to find that and move forward with the team. To be able to come out here as the number one qualifier with that 3.66, that’s just an outstanding run with David Grubnic, Mac Savage and all the guys. To win this thing, I’m very excited. It’s our first win together as a team.”

The weekend started with that thunderous 3.661 at 332.18 mph and included another run in the 3.60s during eliminations. She knocked off Antron Brown in the final round with a 3.749 at 302.14, moving all the way to second in a tightly-bunched Top Fuel class. Considering she qualified No. 1 with her legendary father – becoming the first father-daughter to claim No. 1 spots at the same race – it’s a weekend that can make a season. Grubnic has always been capable of providing major fireworks, as he displayed in recent years with Clay Millican. But the question has always been about consistency. If he finds it with Force, the results could be huge. She’s already shown her mettle and giving her a fast, consistent car could make things interesting in 2019.

“It took us awhile to find our stride and we’ve been turning a corner these last few races,” Force said.

HIGHT STAYS RED-HOT: At the rate Robert Hight is going, it won’t be long until we’re more worried about who’s going to be second in Funny Car heading into the Countdown to the Championship.

That may be a slight stretch, but it’s worth noting Hight already has a 110-point lead over Matt Hagan through five races, and that’s with Hagan winning a race and advancing to the final round in Houston.

But Hight has been on another level thus far in 2019, picking up his third victory of the year with an impressive 3.941 at 310.84 in the final round against Hagan. The biggest drama came when Hight sat outside the field after Friday. But that ship got righted quickly on Saturday, as he qualified with a 3.908 and turned into a machine during eliminations.

It included wins against defending world champ J.R. Todd and his boss, John Force in the semifinals, giving him four straight wins over the 16-time champ in eliminations this year. It kept Force from his 150th career win, while Hight earned his 48th Wally, closing in on a pretty historic number of his own.

“I had a tough road. Jonnie Lindberg, he’s a tough competitor. Second round against J.R. Todd, he’s the current champion and John Force, he’s looking for his 150th win. Nobody will ever, ever match that or even come close. Then I had Matt Hagan in the final,” said Hight. “It was a tough day and it was kind of funny because Tiger Woods goes out and wins the Master’s today and they look at him as an old man. He’s 43 year’s old. Well, I guess in this sport I’m older than most of the guys I race other than the boss and it shows that the older guys can still get it done.”

STEVIE FAST GETS REVENGE: We’ll have more in an exclusive piece with Houston Pro Mod winner Stevie “Fast” Jackson, but the bigger question might be this: Will someone other than Todd Tutterow or Jackson win in Charlotte?

That pair has dominated the scene in 2019, an impressive feat considering the talent in the class, with Tutterow winning in Gainesville and Jackson returning the favor in Houston with a 5.675 at 255. The speed is remarkable for a blower converter car, but with Jackson, we shouldn’t be surprised by anything.

“I came into this race with a chip on my shoulder after that runner up in Gainesville,” Jackson said. “Todd and I talked about meeting in the finals again this race and I’m really glad it worked out in my favor this time. Can’t wait for Charlotte!”

MEYER SHOWS OUT IN TAD: Make that 11 straight round wins for Megan Meyer, who knocked off Troy Coughlin Jr. in an exciting Top Alcohol Dragster final round in Houston. The weekend started with a mind-blowing 5.118 at 284.75 in qualifying and ended with a 5.231 at 279.15 against Coughlin in a super-close race. After a regional win in Dallas the previous week, Meyer kept rolling in Houston and looks to be set for another banner year.

“What an incredible season we’ve had so far,” Meyer said. “We finished off 2018 with a couple of wins and we have been able to carry that momentum into 2019. My team has done an outstanding job of giving me a great racecar to drive, and I greatly appreciate my relationship with the guys.”

CELEBRATION OF THE YEAR?: So this is what it means to win your first Wally. What an awesome scene for John DeFlorian and his team after they beat J.R. Carr in the Mountain Motor Pro Stock final round. It’s the first of four NHRA races for the class and, as expected, they put on a great show, with DeFlorian qualifying No. 1 with a 6.255 at 224.40. The final round wasn’t a thing of beauty – and Carr threw away a win by going red – but this celebration was spectacular.

QUEEN OF SPEED: We’ve got NHRA Pro Mods running 260 mph now because of course we do. The class continues to amaze and Erica Enders provided a major highlight in Houston, running 260.11 to set the world speed record in the class. That was impressive, as was the improvements the Elite Motorsports team continues to make in the class.

“We were fast all weekend on every run,” said Enders, a two-time Pro Stock world champion. “To run 260 and set the world record, it was pretty exciting. I think it definitely shows what we’re capable of and there’s some awesome horsepower the guys at Elite have built.”

First win of the season for this @AdvanceAuto team! @GoGrubby,Savage &this entire crew led the pack all weekend w/ a No.1 qualifier & win on Sunday! We also shared the winners circle with teammate @roberthight7000 & his @AAATexas team! Excited for this season w/ this new team!👊🏼 pic.twitter.com/rq5mp7FR4I

Here it is! The unveil of the special @MDAndersonNews livery @FastJackBeckman is running at this weekend’s #SpringNats in memory of Terry Chandler! ❤️ pic.twitter.com/8EYJWJSfQK

The drag racing world has been waiting forever and yesterday we finally got to witness the incredible new twin diesel powered pro mod of NHRA driver Bob Rahaim as it made its debut during qualifying in Houston… Looking good! (UPDATE! After being unhappy with the torque numbers yesterday they’ll be going back to a nitrous combination today) #vetsforcleanburningdiesel #JKitsnotdiesel #itsactuallypoweredbycoal #thetruthisalwaysinthehashtags #justnottheseones 😎

Made a little history tonight w/ the man that has taught me everything about this amazing sport! My dad & I are the first father & daughter in @nhra history to qualify No.1 in the nitro classes together! This @AdvanceAuto team is looking forward to raceday tomorrow! 👊🏼 pic.twitter.com/gX8wJUeK2r

So, it was a bit strange not seeing Pro Stock at Houston. It was the first race sans the class thanks to its new 18-race schedule, so it will take some getting used to having them on the sidelines for a month. The good news is we weren’t lacking in action thanks to Pro Mod and Mountain Motor Pro Stock. They both put on excellent shows – no surprise there – as we close in on a hectic part of the schedule. The Charlotte four-wide race is next and we’ll get our first-ever glimpse of MMPS going four at a time. Should be wild and, as usual, we can’t wait.