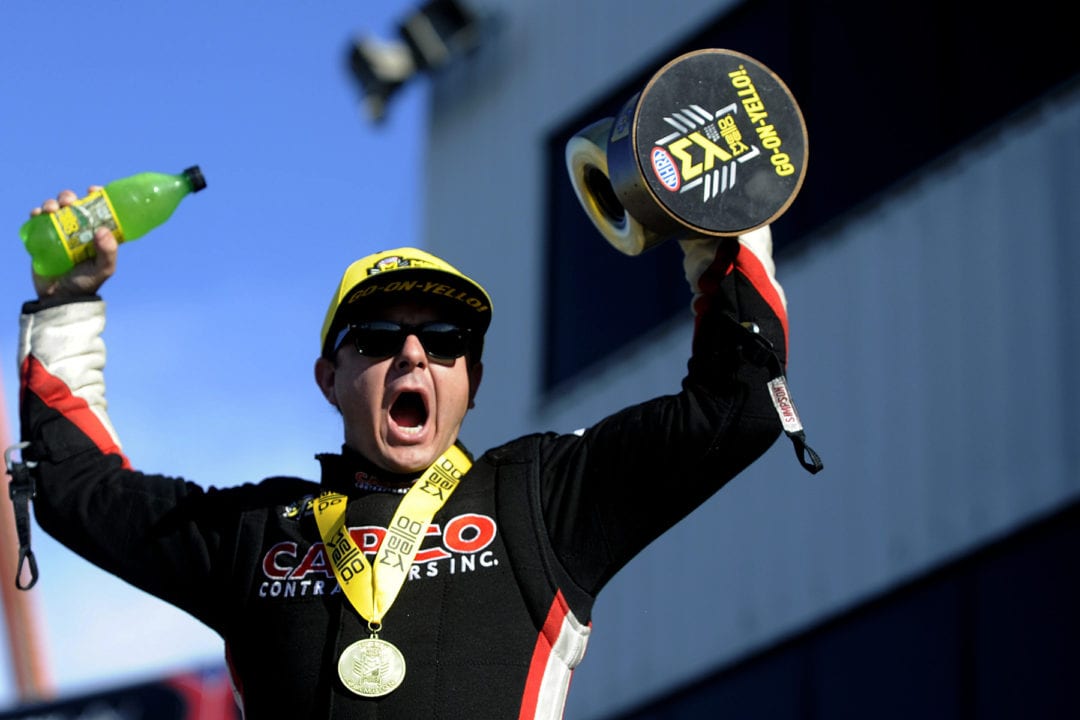 After Steve Torrence’s amazing 2017 season, the one question I had was, “Could he do it again?”

He had nearly done it all last year in Top Fuel. He won eight times, was the dominant driver for most of the year, but the way the season finished – the crash in Dallas, narrowly losing the title to Brittany Force – I was left wondering how much that took out of him.

Could he possibly conjure everything up and do it again in 2018? These seasons are a grind, especially when you’re as passionate as Torrence and championships are on the line.

Well, two races into the Countdown to the Championship and I think we have our answer.

In almost every way this season, Torrence has been better and seemingly more determined. He’s 8-0 during eliminations in the playoffs thus far, beating Clay Millican with a 3.770 at 323.66 mph in the finals on Sunday in St. Louis.

It gives Torrence seven wins in 2018, pushed his points lead over Millican to 70 points and continued a zeroed-in approach the Texan has had all year.

“This is going to be a really hard-fought championship but I couldn’t have a better group to be backing me up than these Capco boys,” Torrence said. “I’m blessed and fortunate to be part of this Capco team and after all their hard work, I’m just glad I didn’t drop the ball. I’m very confident moving forward. This is all we could have asked for to start the Countdown.”

Remarkably, Torrence now has 15 wins in his last 39 races and there appears to be no stopping him heading to his stomping grounds in Dallas in two weeks. Of course, that’s where the ill-fated crash took place a year ago, so the Torrence redemption tour will roll on there. If it’s anything like these first 20 races have gone, expect Torrence to hurt some more feelings. This relentless attitude has been impressive to watch all 2018, but Torrence knows as well as anyone that a lot can happen over this final stretch of races. Plenty of talented drivers like Millican and Tony Schumacher are still within range, but Torrence seems bound and determined to keep them at bay.

HIGHT HAS EXPLOSIVE FUNNY CAR WIN: It wasn’t the way Robert Hight wanted to take the points lead, but it also made for a hellacious highlight.

The week off before Dallas couldn’t come at a better time for the defending world champion, who again seems to be peaking at the right time.

He qualified No. 1 and now sits 30 points ahead of J.R. Todd and 70 up on Courtney Force. Hight, though, knows this crazy Funny Car duel isn’t going to be won easily.

“Everybody is bunched up,” Hight said. “This championship is going to be a fight right down to Pomona and I just hope that I am in it.”

One quick note: it’s very awesome to see Wilkerson in the championship hunt through two playoff races. He’s currently fourth, 74 points back of Hight, and provides the feel-good story of the Countdown to the Championship.
Can he keep it up for the next four events? Well, we’re all excited to find out.

GRAY JUST WINS: This was the headline a few weeks ago when Pro Stock’s Tanner Gray won in Indy. Well, we’re keeping it here because it continues to be true, even as reports surfaced Monday evening that Gray is moving to NASCAR in 2019. It’s big news, but at least for the moment, Gray seems locked in on closing out 2018 with a Pro Stock championship.

He picked up his sixth win this season by knocking off Drew Skillman in the final round, though the big win came in the semifinals when Gray beat Reading winner Vincent Nobile. A win there would have given Nobile the points lead, but Gray came through and now leads Nobile by 52 points heading to Dallas.

“During qualifying we didn’t run as well as we thought we should have,” Gray said. “We made nice runs, but we never got aggressive enough. It was cool to see everyone come in with their head on straight and fight back to get a win. I felt like all of us did a really good job of just going round-by-round.”

SMITH MAKES HIS MOVE: This one had to feel like a long time coming for Matt Smith. The two-time Pro Stock Motorcycle world champ had been the No. 1 qualifier for three straight races before St. Louis, but had little to show for it other than a bunch of disappointment. He didn’t qualify No. 1 at Gateway, but he did end up in the winner’s circle for the second time this year, going 6.877 at 198.44 to beat LE Tonglet in the final round.

Smith beat No. 1 qualifier Chip Ellis in the semifinals, while previous points leader Eddie Krawiec dropped to third in points after an early exit. If nothing else, we’ve got some good drama heading into these final four races.

While Krawiec was running wild in the playoffs a year ago, cruising to a title, this season looks far different. Smith holds a slim 21-point lead on Tonglet, while Krawiec is 41 points back. In all, four riders are within 62 points of Smith.

“We hurt our motor on Friday night,” M. Smith stated. “Angie (Smith, wife) and I stayed up all night last night rebuilding it. The Harley’s got three bikes out here trying to whoop up on us but we’re going to try and do our best to stay focused and do our job. As long as we don’t have any part failures we will be fine.”

STEVIE FAST HURTING FEELINGS: Well, well, well. Look who is back in impressive form. That would be one Stevie “Fast” Jackson, who won his second straight NHRA Pro Mod race with an ultra-impressive performance in St. Louis. He ended up qualifying No. 3 with a 5.727 and then never left the 5.70s in eliminations, going 5.721 in the first round to send points leader Rickie Smith home early. If Jackson plays a major role in this year’s championship race, that may be the round that gets talked about for quite a while. He then dispatched points leader Mike Janis in the semifinals before going 5.759 at 250.88 in the final round against Chad Green.

All of a sudden, Jackson is red-hot and it’s coming at the perfect time. He won Indy, backed it up in St. Louis and now sits just 87 points back of Janis with three races left. This, folks, is going to be fun to watch. It’s a far cry from the two DNQs Jackson suffered earlier this year, but those struggles only seemed to motivate him more.

“If you had asked me five races ago if we would win another race in my career I would’ve told you, ‘no,’” Jackson stated. “This car kicked my butt for a while. If you give Billy Stocklin (crew chief) and I enough swings at it though we can knock the candy out of the pinata.”

MUSI IS THE MAN: Yes, Pat Musi is a master when it comes to building dominant racing engines. Yes, here is another example of that.

CASTELLANA MAKES HISTORY: Frank Manzo always thinks big and he and driver Mike Castellana did the spectacular during Pro Mod qualifying on Saturday. Castellana ripped off an incredible 5.676 at 255.39 – a seemingly astronomical speed for a blower car – to put together the quickest run in NHRA Pro Mod history. It was unreal to see, but also fitting seeing that it came in the quickest field in class history.

The bump was an unreal 5.777, which is a heck of a run in its own right. In St. Louis, it simply drew you a first-round matchup with No. 1 qualifier Castellana, who certainly put together one of the runs of the year regardless of class.

LEAH DOES IT AGAIN: One way or another Leah Pritchett may track down a championship this season. The Top Fuel star currently sits fourth in points there with a real chance for a career-best finish. But she’s also second in points in the Factory Stock Showdown after a second straight win after her victory in St. Louis on Sunday.

Pritchett dipped in the 7-second range in qualifying and early in eliminations, and then when 8.001 in the final round to beat Stephen Bell in her Mopar Dodge Challenger Drag Pak. It’s more impressive double-duty success from Pritchett, who continues to carve out quite a story in her racing career.

“Incredible weekend by the ‘el Bandito’ team with Mopar,” said Pritchett who moved up to the No. 2 spot in the FSXX standings. “We carried that momentum from the U.S. Nationals without a hiccup. That extra 25-pounds didn’t seem to faze this Mopar power. I’m not saying it was easy by any means. We put it to it every single round and that’s extremely impressive and a testament to the durability of the race cars, the powerplant and the people that Schumacher has put in place to run this program.

“We are in a fantastic spot, second place in the points. It’s like Christmas Eve going into these last races. I really wouldn’t want a different perspective. We have a little bit of freshening up to do but overall this has been an incredible weekend of just straight teamwork all the way around, and the Mopar power just continues to show through and we continue to want to show up.”

.@LeahPritchettTF races to the win in the @FactoryStockSho category! Another incredible run for the @OfficialMOPAR @Dodge Drag Pak – 8.001, 172.36 over Stephen Bell who broke on the line. #MidwestNats pic.twitter.com/LbNxUYXJcT

DRAG ILLUSTRATED LIVE
Make sure you check out the latest episode of DI Live with Wes Buck, which is loaded with a bunch of awesome guests!

BOWMAN’S UNFORTUNATE RUN: You hate to see something like this, but 2017 World Series of Pro Mod winner Mike Bowman ended up in the sand in St. Louis after the chutes got tangled up during a qualifying run. After the travails he went through to get the car ready for the 2018 WSOPM, this was tough to watch. Hopefully things start moving back in the right direction for Bowman, who by all accounts is one of the great guys in the sport.

ROWE BRINGS US ALONG: I mean, there’s not much cooler on social media than in-car cameras. When it’s on a killer Pro Mod, even better. Here Danny Rowe takes us along for his awesome 5.76 from qualifying at St. Louis.

He does it again! #SteveJackson comes out on top for the second race in a row at the #MidwestNats! #NHRA #RPM #RealProMod pic.twitter.com/AqNovNcWzP

It’s a SELLOUT at @GatewayMSP! THANK YOU to all the fans for spending your weekend at the @AAAMissouri #MidwestNats! pic.twitter.com/e4Sp2Xumjb

THE BIG 5-0-0
St. Louis marked the 500th start for Top Fuel’s Tony Schumacher. It was yet another first for the winningest driver in class history.

FINAL WORD
Only four races remain in the NHRA season and there is plenty left to be decided in every class, including Pro Mod. We all want thrilling races to end the season and we’re going to get just that. The odds are also looking good that we’re going to have a couple first-time champions in the process. See you in Dallas.