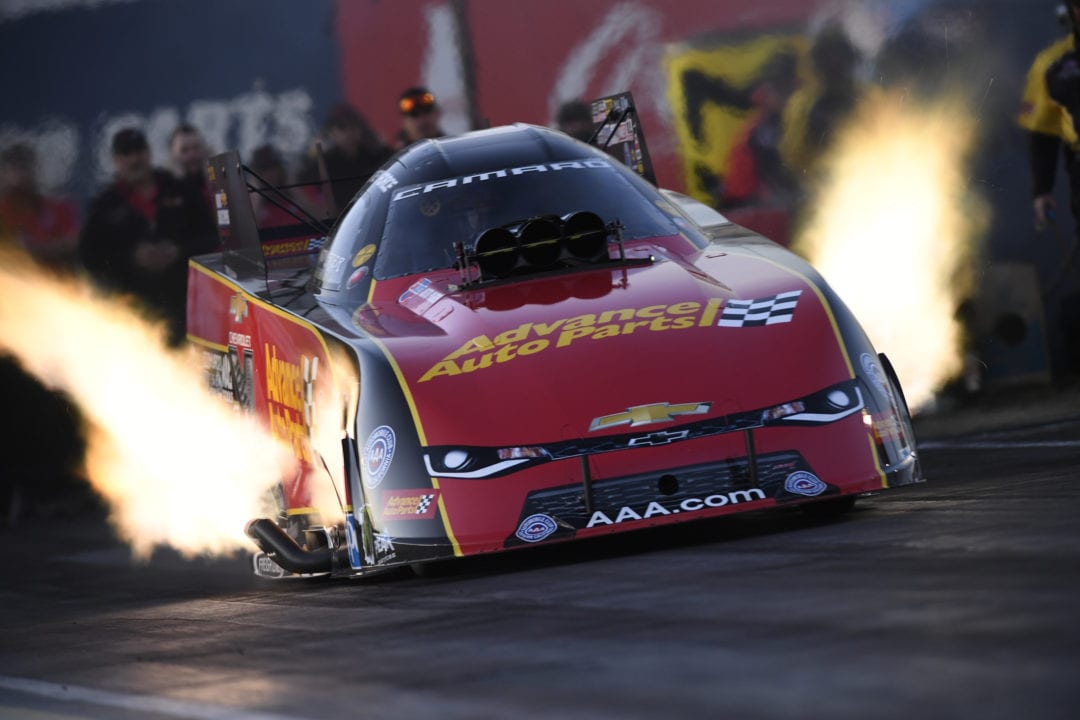 Mere moments after exiting the car following a scary crash during Sunday’s eliminations at the NHRA Arizona Nationals, John Force had a quick message for his daughter, Courtney.

“He told me go out and kick their asses,” Courtney said.

It was all she needed to hear.

Force climbed back in her car, made a solo run in the semifinals and posted the fastest Funny Car run of 2018 in the finals, going 3.834 at 337.16 mph to knock off Tommy Johnson Jr. and wrap up an emotionally-charged day on a positive note.

“It’s a little overwhelming,” Force said on Sunday. “It’s been an extremely emotional day. Coming from Pomona, trying to put that behind us and get to Phoenix, and Dad goes up and has a huge explosion. It’s one of those things that’s out of your control. You just have to just kind of switch your focus, get back in the car. My dad and my crew chiefs are the ones that gave me confidence to get back in my race car.”

It had been 43 races since Courtney last won, but it’s also been quite an emotional start to the 2018 season. First was her father’s explosion in Pomona followed by sister Brittany’s wreck in Top Fuel that same weekend that sent both to the hospital.

John’s second rough incident in as any many races added to the difficult span, and Courtney said postrace the team told her she didn’t have to get back in the car for the semifinal run. But her dad’s message helped her confidence and Force was determined to make something of an otherwise difficult weekend.

She posted her best career finish in 2017, finishing third in points and doing it without an event victory. It spoke of Force’s strides as a consistent driver and a quick start to 2018 – she also qualified No. 1 in Phoenix – may show she has taken another step.

Force also spoke glowingly about how the team has meshed with the addition of crew chief Brian Corradi, helping her through a rigorous weekend in impressive fashion.

“It’s been huge having Corradi on our team, working with Dan Hood,” Force said. “They’ve known each other for a long time and it’s been a really great connection with our entire team. We didn’t have lane choice in the finals and we were still able to lay down a killer number. They gave me the confidence to get in that car and they make me feel safe because of the amazing job they do. It’s definitely a great start to our season. This one definitely feels good and I know it will help my dad feel better.”

Torrence With a Memorable Win: It was a semifinal and final round that Steve Torrence will remember forever in Phoenix. First, there was the thrilling side-by-side run against his dad, Billy, in the semifinals, and then knocking off close friend and teammate Scott Palmer in his first career final round appearance.

“I’ve known Scott Palmer since I was 15. I asked him when were going up to the finals, ‘Twenty years ago, did you think we’d be here?’” Torrence said. “Racing my dad in the semis was pretty cool and racing Scott in the finals was pretty awesome in its own right. It’s a heck of a day. The one with my dad, that’s going to be a high note you remember for the rest of your career.”

It was an ideal return to form for Torrence, who won eight races a season ago, but suffered a late-season crash in Dallas and watched Brittany Force slip by him for the championship. He also took the blame for a poor start in Pomona, but Torrence looked back to his normal self in Phoenix.

McGaha Jumps Out Quickly: Chris McGaha threw his hat into the championship contender mix in Pro Stock with an impressive performance in Phoenix, knocking off Jason Line in the final round with a killer performance of 6.529 at 211.59 mph.

It was the Texan’s first win in almost a year and sixth overall, and marked the first non-KB Racing win since the opening race of the Countdown to the Championship a year ago.

Force Released From Hospital After Crash: In terms of crashes, this one was as vicious as it gets, as John Force careened into Jonnie Lindberg’s car just past the finish line after an engine explosion. The cars were linked by parachutes, and crashed into both walls before coming to a stop.

Force was evaluated and released Sunday from Chandler Regional Hospital, returning to the track to congratulate Courtney.

“This was a great day for John Force Racing,” John Force said. “Brittany came back from a crash at Pomona and won first round and Courtney won Funny Car for Advance Auto Parts. My struggles continue, but I’m a big boy, I’ll fix it.”

Ray Wins RPM Pro Mod Race: It looks like we have another contender in the loaded NHRA Pro Mod class. Making his class debut at the RPM Warm-Up race in Orlando, Jeremy Ray knocked off Shane Molinari in the final round to start his NHRA Pro Mod career in impressive fashion. It’s also another reason why the NHRA Pro Mod opener in Gainesville can’t get here soon enough.

Scott Palmer may not have won the race, but his team definitely partied like it did. An awesome scene from a team that made its first final-round appearance in Top Fuel and appears to be closing in on that first win.

The Legend of Scott Palmer pic.twitter.com/Acat5x1GPb

Drag Illustrated Editor-In-Chief Wes Buck’s live Facebook show. Last week’s guests include a flurry of Lights Out 9 winners, including Stevie “Fast” Jackson who claimed the “Radial Versus the World” title over Keith Haney, earning the $50,000 prize.

Ray’s final-round win over Molinari at the RPM Pro Mod Warm-Up Race in Orlando. Blower versus turbo in this one.

On the East Coast, Street Outlaws Live drew a huge crowd at South Carolina Motorplex in Orangeburg. That is definitely impressive. 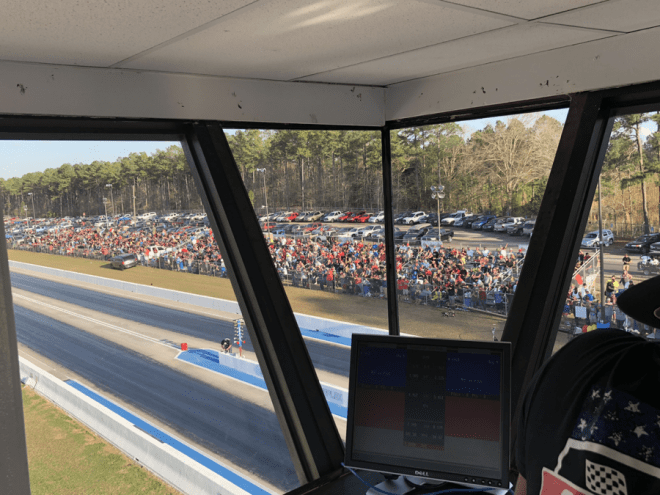 Deric Kramer earning his first No. 1 qualifier in Pro Stock.

First off, this has more than 200,000 views, which is pretty incredible. But if you’re having some Lights Out withdrawals, here’s 11-plus hours from last Sunday to scratch that itch.

Surprised my dad came back to congratulate my @AdvanceAuto team after being released from the hospital. Safe to say he surprised my crew chief Corradi a little more than me.😘😂💛🏁 So glad my dad is ok & appreciate all the fans writing in w/their concern. He’s doing good👍🏻 pic.twitter.com/BDJ579h2jv

Headed back to Kilgore with this guy… pic.twitter.com/8W79kPMIob

When you get back to the pits after a win 🤣🤣🤣 #ArizonaNats #NHRA #ProStock pic.twitter.com/3liQVyz2Hz

Lindberg Lets Everyone Know He Is Okay

Phoenix Fans Out In Huge Numbers. Near-sellout on Saturday and a sellout on Sunday

Just another reason why Phoenix continues to be my favorite track… just something special about these fans. #highfiveparade pic.twitter.com/fmW2ae3TgM

NEVER EVER EVER EVER EVER EVER has my bike been finished and ready to test 2 weeks ahead of time… Usually the grind is the night before we leave… So ready to go… This off season is driving me nuts with the exception of my gym daily’s… 14 days and counting!! @densoautoparts @denso_racing @densopartseu @lisa_michler #4sparemotorswith1inthebike #plainjanecarbonfiber #shenotsexyyet #DENSOpowered #teamDENSO #DENSOsponsored #DENSO #DENSOsparkplugs

As someone who grew up around the sport of drag racing I have always thought parachutes were the coolest thing ever! From tying Lipton ice tea bags to the back of my Hot Wheels cars to look like parachutes to tying plastic grocery bags to the back of my plastic souvenir dragster from the track that I would play with until it broke (usually a week tops) I have always been obsessed with them so it made me so happy to see that NHRA funny car driver Del Worsham is exploring with three parachutes instead of the standard two during qualifying for the Arizona Nationals at Wild Horse Pass Motorsports Park. #VetsformoreParachutes 🇺🇸

A definite bummer to see the incident with Force and Lindberg yesterday in Phoenix, but good to see both are okay and should be ready for Gainesville.

There’s no denying the weekend had plenty of excitement. A sellout on Sunday, a near-sellout on Saturday in Phoenix, plus a huge crowd for the Street Outlaws event on the other side of the country.

Plus, Palmer closing in on a win, Torrence and Courtney’s victories and plenty of excitement still from Lights Out 9, with the Sweet 16 race also right around the corner. How can you not like this start to 2018?