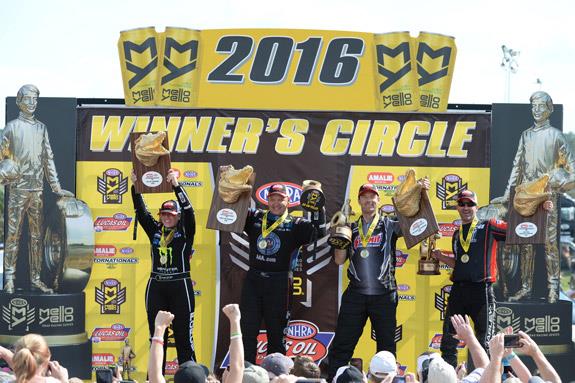 The revitalized National Hot Rod Association continued to pick up momentum as the NHRA Mello Yello Series rolled into its third stop of the 2016 season, the Amalie Oil NHRA Gatornationals. The NHRA and its teams worked around a daunting weather forecast and on-track delays to present another thrilling chapter in the 47-year old Gatornationals history book. First-time winners were crowned, track records were obliterated, and fans were on the edge of their seats throughout the weekend.

The yellow winner’s circle hats have been distributed, the Florida mud has dried up, and the race cars are loaded up and heading back to the shops. It’s time to recap the Amalie Oil NHRA Gatornationals. 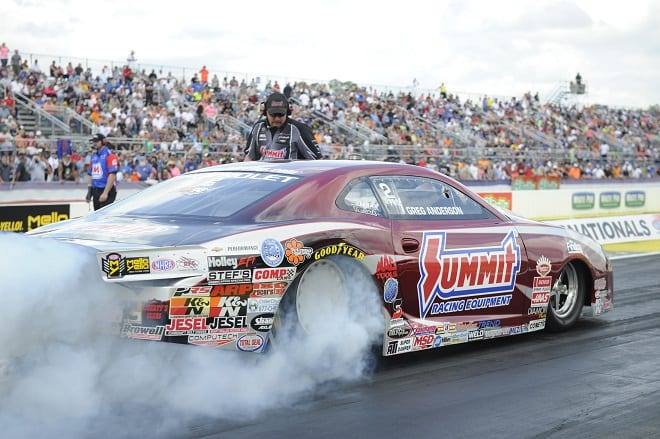 For the third race in a row, the three-car team of KB Racing qualified in the top three spots and won the race in Pro Stock as the class moves out of the carbureted era and into the future with electronic fuel injection. KB drivers Jason Line (6.584), Bo Butner (6.591) and Greg Anderson (6.594) were the only drivers in the 6.5 range in qualifying. Butner bowed out in the second round on a holeshot, but Anderson and Line marched on to the final round for the second all-Summit final of the early season. Anderson strapped a big holeshot on his teammate in the final, taking Wally number two of the year in a 6.598-to-6.581 decision. Watch for this North Carolina-based powerhouse to continue their domination as the NHRA moves on to team owner Ken Black’s home turf, Las Vegas, for the Denso Spark Plugs NHRA Nationals, April 1-3. 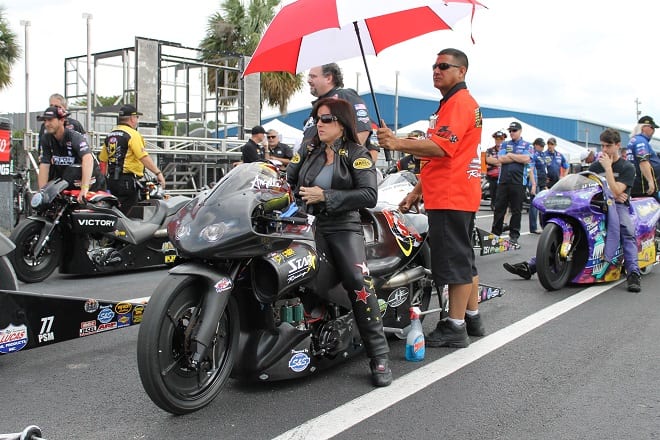 While it’s no surprise that former world champions Eddie Krawiec and Hector Arana Sr. were the last two riders standing in the class’ 2016 debut (Krawiec won), but the bike class did see a lot of unexpected results in qualifying and the early rounds of elimination. Defending event champion Karen Stoffer failed to qualify, while PSM newcomer Melissa Surber qualified seventh, earning praise from Terry Vance of Vance & Hines. Two-time world champion Matt Smith missed the field for the first time in 12 years, coming up short of the 6.938-second bump spot by just four thousandths of a second. Class heroine Angelle Sampey was the surprise of first round when she left two thousandths of a second too early, though team owner and crew chief George Bryce chalked it up to an error in the clutch set-up causing the bike to react quicker than usual.

The titans of the sport lived up to the precedent they set at Phoenix a few weeks ago, when Leah Pritchett scored her first Top Fuel victory after outlasting a semifinal round made up of three potential first-time winners. With J.R. Todd and Tony Schumacher being the only winners left in competition after the Gainesville first round, the likelihood of another first-time winner being crowned was high. Former IHRA competitors Clay Millican and Terry McMillen eliminated those drivers in the second round, leaving Millican, McMillen, Brittany Force, and Dave Connolly to fight it out for the Gatornationals Wally. McMillen (3.828) and Force (3.72) laid down their best runs of the weekend in the semifinal to move on to the final round; the first for McMillen and the second in a row for Force. McMillen was unable to deliver a win for his sponsor, Amalie Motor Oil, at their home race, as his engine expired in spectacular fashion while Force went on to win with a 3.772. The win was Force and John Force Racing’s first in Top Fuel and the second victory of the year for tuner Alan Johnson. It was also the first double-up for JFR, as team president Robert Hight grabbed the Funny Car win.

Gainesville Raceway is known for historic performances, like the first 300 mph Top Fuel run and first six-second Pro Stock Motorcycle run, but the track had never before seen a three-second Funny Car run. After the first qualifying session this weekend, four sub-four second runs were posted. Another seven were added in the second session, three during Q3, and six in the final session. The final pair of the final session laid down incredible numbers, with Courtney Force taking the number two position with a 3.893 ET and Jack Beckman nabbing the track and national records in elapsed time with his 3.879/329.26 MPH blast. Ten more three-second runs were added throughout eliminations, bringing the event total to 30 sub-four second runs.

Most Exciting Final Round: Pro Mod 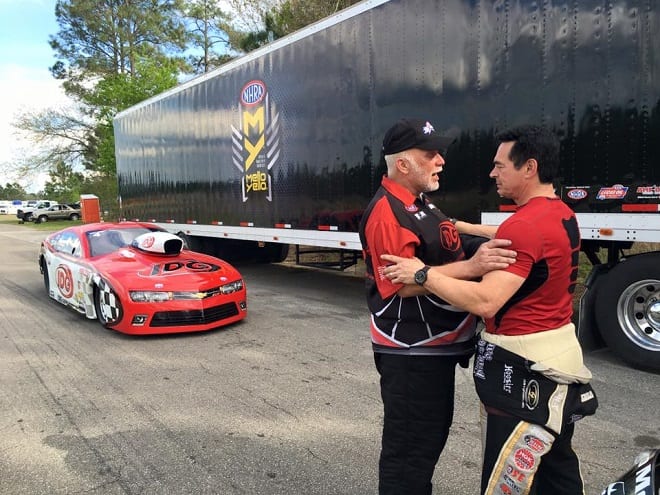 Smith and Rowe share a moment after the final round. (via RPM Association/Facebook)

The J&A Service Pro Mod Series would qualify for several other titles, but the exciting final round embodied so much of what the class has to offer. First off, you have two big personalities in “Tricky” Rickie Smith and Danny Rowe. Smith tunes his own car and has the assistance of just one crew member, Chad Hester, while Rowe has a two-car team led by blown alcohol specialist Jimmy Rector and backed up by a cast of skilled crew members. It was a battle between power adders and chassis builders, with the nitrous-assisted, Jerry Bickel-built ’15 Camaro of Smith taking on Rowe’s supercharged ’15 C7 Corvette out of the Tim McAmis fab shop. The drivers brought their showmanship along with their performance for the final round, as the two entered a staging battle. Rowe rolled in first and held the lead downtrack until Smith drove around him to take the season-opening win in a 5.829-to-5.869 decision.

In an effort to make the sport as accessible as possible, the NHRA debuted their NHRA All Access streaming service this weekend. For an introductory rate of $99, fans will be able to log on and watch all of the remaining Mello Yello Series national events. The stream, which is basically a carbon copy of the Sunoco Vision big-screen video and audio feed at the races, was live from the controversial first-pair wreck in Top Dragster on Friday morning and stayed online until the last sportsman finals were decided on Sunday evening. NHRA All Access is worth the price, especially for international fans, who previously had to wait days or weeks after the event to watch coverage on TV, if their country’s ESPN programming even included NHRA drag racing. If you can’t make it to the races, this is a close second.