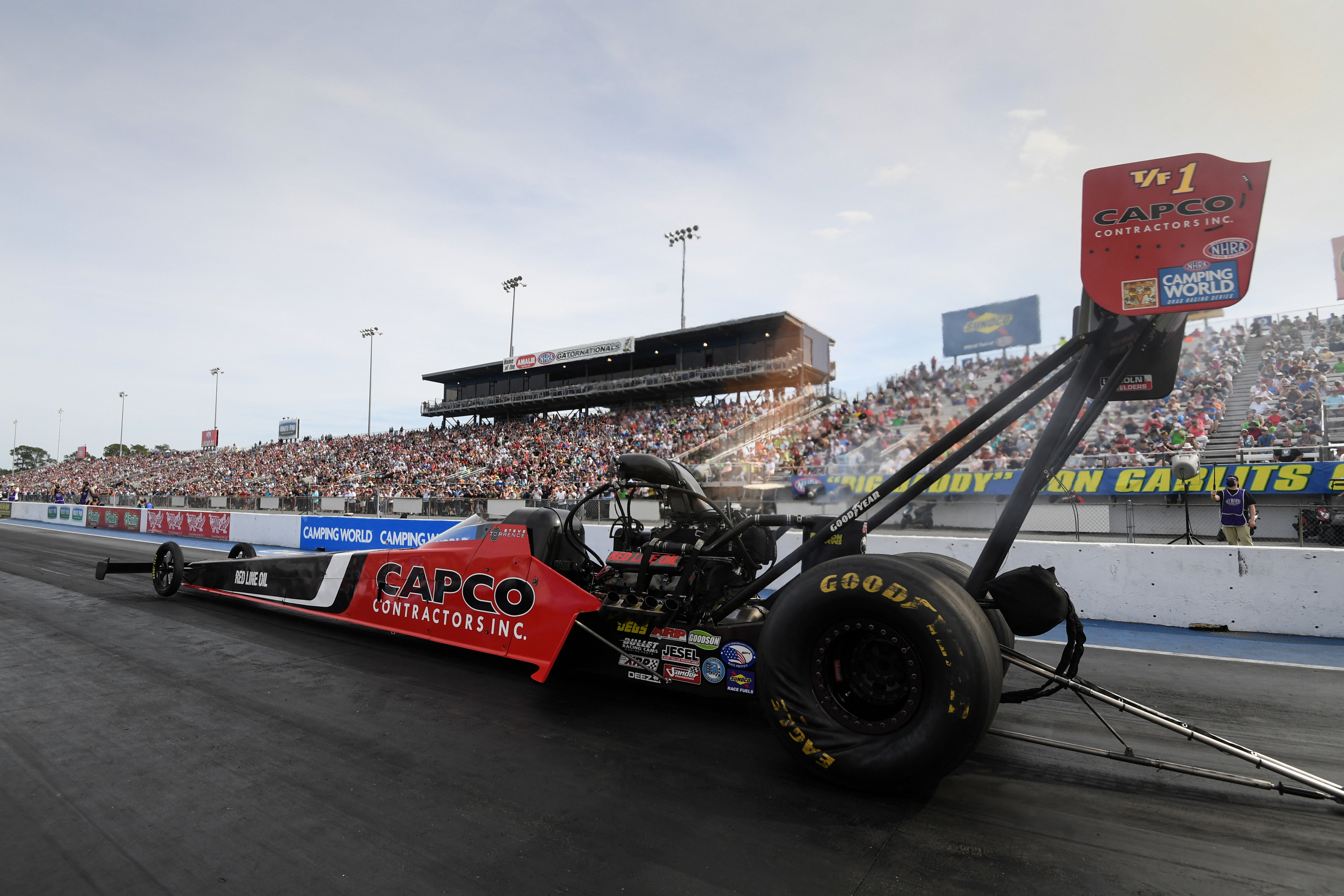 So, you think people were ready for the Gatornationals and the 2021 NHRA season or what?

The numbers — and the visuals of a packed Gainesville Raceway – tell us they were extremely excited to see this year kick off.

Everything felt a little normal last weekend, minus the part of the Gatornationals actually starting the NHRA season, and people responded en masse to their television sets. FOX Sports released the viewership numbers from Sunday’s live broadcast on FOX and it’s certainly something to feel good about when it comes to our great sport.

The broadcast averaged 1,026,000 viewers on Sunday, and the final round peaked with nearly 2 million viewers. That’s not counting the people watching on NHRA.tv or the people who DVR’d the show and watched it later that day, which is likely a good amount as well.

All in all, those are terrific numbers and FOX’s best performance for an NHRA event in nearly four years. It ranks as the third-best performance by a NHRA event on FOX ever, and the final round may have been the most viewed NHRA segment in FOX (and perhaps broadcast?) history. 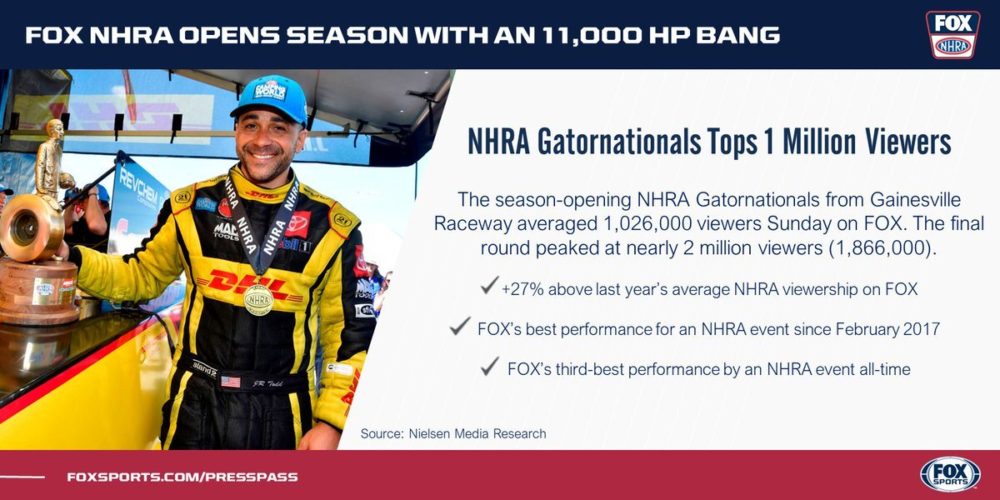 It’s pretty cool when you think about it. You had at couple million people watch Matt Smith crush another 200 mph run on a motorcycle, take in the legend Greg Anderson winning for the 95th time — and on his birthday, no less – J.R. Todd go full wheelman in his pedal-fest victory against Robert Hight and the returning JFR, and, of course, watch Josh Hart win in spectacular fashion in his first-ever Top Fuel start.

FOX Sports PR didn’t mention this, but with the event going past 3 p.m. ET and ending at approximately 3:10 p.m., the overrun might have topped 2 million viewers.

It would be interesting to see what those last 10 minutes got, especially as it went into the normally scheduled NASCAR pregame show on FOX.

It’s not out of the realm of possibility that the NHRA overrun — which was Todd’s Funny Car win and Hart’s Top Fuel triumph — might have been the most-viewed segment in NHRA history and certainly in the NHRA/FOX relationship.

The numbers are spectacular and deserve to be shouted from everywhere. It’s an outstanding start to a year still riddled with uncertainty (thanks, COVID), and gives everyone hope and optimism that things could still be really good in 2021.

It also tells me a few things:

So, regarding the first two things: A four-plus month off-season isn’t likely again, but maybe it’s smart to stretch the off-season a few more weeks than the usual two-plus months. I know, probably not feasible, but having even a three-plus month off-season might build the anticipation a little more. And, yes, the Winternationals in Pomona is probably the forever starting point of the season in years that don’t include COVID, but last weekend felt all sorts of special. Maybe it was the long layoff, but there’s something about Gainesville that is magical.

Of course, it doesn’t hurt to have a TON of passionate, drag racing-thirsty fans in attendance to get the juices flowing, and that’s what Gainesville provides.

The World Finals in Pomona are always a great place to end the year and that location is just as majestic, but it was pretty cool seeing the Gatornationals kick off the season. It seems like a lot of people were intrigued by it, too.

Lastly, taking advantage of this NASCAR relationship seems key. NHRA has enjoyed huge crowds when following a NASCAR race, either on FS1 and FOX, and this weekend proved NHRA could be a strong lead-in as well, which makes the series extremely valuable.

Let’s hope that continues, at least until NASCAR makes its annual move from FOX to NBC over the summer.

One note: How cool would it be to have the NHRA Four-Wide event in Las Vegas next month follow the NASCAR race in Richmond on FOX in a primetime spot? I’m talking 6:30-8:30 p.m. ET or 7-9 p.m., showing off 40,000-horsepower in a great Vegas setting. With the time difference, it could be close to live as well.

Okay, probably not happening, but there are other cool possibilities over the next few months.

NHRA could serve as the FS1 lead-in to NASCAR in May at Atlanta, and possibly follow it later that month in both Charlotte (Four-Wide) and Houston. In June, NHRA would have a great opportunity to lead into a NASCAR race with its stop in Virginia, as well as the next week in Epping, when NHRA could be the lead-in to the NASCAR All-Star race. That’s always a big event when it comes to viewers, and NHRA could again maximize its presence in a major way.

From there, the round-track racers move to NBC, but NHRA has traditionally done well on FOX through the Western swing and Indy on its own.

If there’s momentum already built up, those could be even bigger and there’s some massive possibilities in the fall when the NHRA follows NFL football on FOX on at least one occasion.

Just retaining 15 percent of that audience would give NHRA close to 3 million viewers, and an incredible opportunity to close out the year in style. Getting a NFL lead-in is the absolute goldmine, and several other sports have felt the bump in recent years, from bowling to WWE to bull-riding and others.

It’s now NHRA’s turn to enjoy that and following a terrific and massively-watched broadcast on Sunday in Gainesville, it seems like things are moving in an ideal direction.