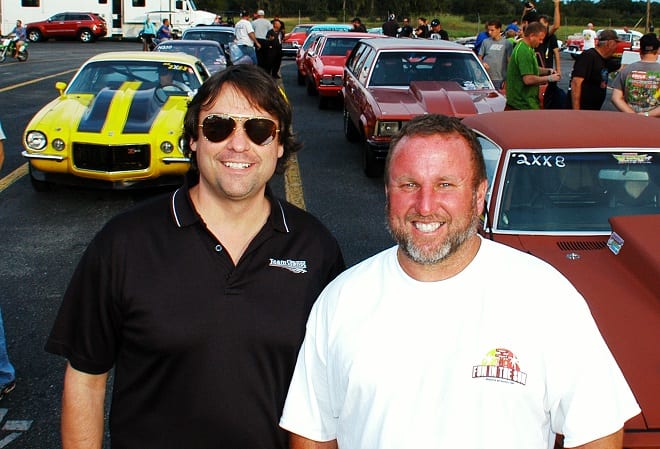 Jeff Stange (pronounced Stang-ee) never went drag racing other than going through Frank Hawley’s Drag Racing School several years ago, but few would argue his pedigree in the sport after growing up the son of Bob Stange, founder of Strange Engineering, originally in Evanston, Illinois.

“I attended races all the time when I was a kid, but I got more into the regular sports when I got a little older. But I did hang out at the shop a lot and worked summers with my dad, cleaning up the shop, cutting grass, just doing whatever needed to be done,” Stange recalls. “Summer was always our dead time back then because all of our customers had already bought their parts and they were out racing, but my dad never wanted to lay people off or anything so he would have us all working on stuff like that, just to keep everyone busy until we started making parts again.”

As a teenager, Stange says he graduated to running a basic mill, something set up to where he just had to make sure it continued to work as intended. “I did a little bit of everything back then, but I never did get heavily into the hands-on manufacturing,” he says. “Then I went to college and got a marketing degree and I had offers to go work for some other pretty big companies, but I always kind of knew I’d end up working with my dad.”

Though he still maintains an office and work space at Strange, now based in Morton Grove, near Chicago, Bob Stange stepped away from day-to-day operations more than two decades ago and handed over the reins at Strange to son Jeff. DRAG ILLUSTRATED caught up with Jeff Stange early in November during the Fun in the Sun bracket race at Florida’s Bradenton Motorsports Park to gather his thoughts on what comes next for drag racing.

What’s the attraction for you to attend a bracket racing event like Fun in the Sun?

Well, I just like going to the race track and being in this kind of atmosphere and culture. Also, I knew Scott Weney pretty well, I kind of grew up with him, and he actually passed away at this event last year. Scott and Scotty Richardson put on the race together last year and later on I was talking with Scotty about it and we both agreed we wanted to do something in Scott’s memory so we partnered up and created the Gearhead Racing Series and this is the first race for it. We plan to have two races in the Gearhead Racing Series next year and more after that. Scotty will be doing the actual organizing and running the races and I’ll be helping to market, promote, show up at the events, and get involved with other manufacturers to help it along. Eventually we’ll be doing bracket races, index races, events about this size with maybe 170 to 250 cars, nothing larger than that. We want to add another one next year and then we’ll keep adding them throughout the country. We want to keep it where it’s more of a localized thing, though.

These are the kind of racers who buy and use your products, too, right?

That’s true. It’s important for me to be out here with our customers, meeting them, seeing them, letting them know that we care about what they’re doing. That’s what we want to do with the Gearhead Racing Series and we want to involve and work with other manufacturers, too—including with our competitors. It’s more about marketing and providing sponsors with a good place to come, meet their customers and work with them in a more laid-back atmosphere. That’s really what it’s all about. I don’t like to use the term ‘grassroots’ too much, but it’s old-school racing, that’s kind of what it’s all about.

The thing is, racers want to race and that’s one thing I really like about bracket racing. You usually have multiple chances to race, plus special events and buybacks, so even if you lose one night you still have other opportunities to get out there and run your car. This is a five-day deal, but usually we’ll try to keep things to a couple of days, maybe race on Friday night, all day Saturday, then go home on Sunday. We want to make it so people can afford to travel and race and have entry fees that are not outrageous and free tickets and we’ll work with track owners who share that kind of philosophy.

What made you start thinking about marketing your company this way?

As far as the drag racing market goes, I just think this is our future, which means working with local tracks and local promoters and getting out there and servicing our customers and promoting our products at the local level. Don’t get me wrong, we’re still going to be working with the NHRA pro teams and sportsman racers, but that’s not where the growth is going to come from.

This story originally appeared in Drag Illustrated Issue No. 104, the Tomorrow Issue, in October of 2015.