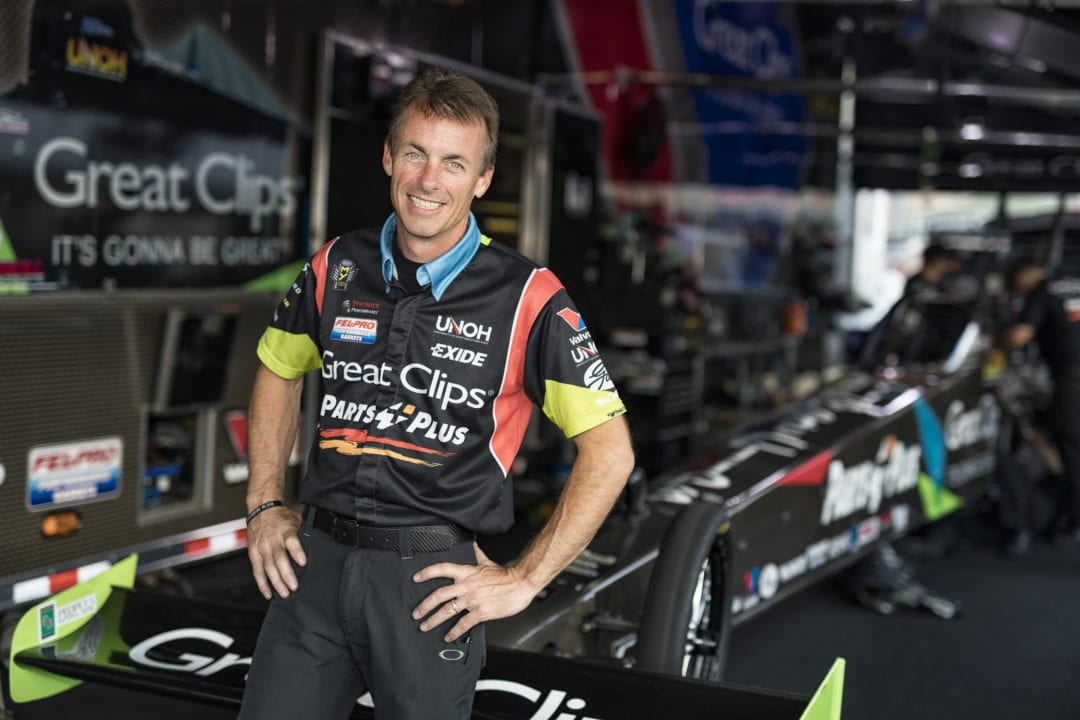 “There are a couple songs that always get my blood going, get me pumped up,” admits Clay Millican. It’s hard to believe music is needed to get the energetic, excitable Tennessean fired up and ready for race day, but Millican relies on this eclectic mix of rap-rock, hip-hop and a touch of country before he jumps in the Parts Plus/Great Clips Top Fuel dragster.

Rollin’ – Limp Bizkit – “Love that song. I love it so much that while I was sponsored by Werner Enterprises, which is one of the largest trucking companies in the US, when I would get out of the car I would say, “We just keep on rollin’, baby!” I said that for years and years. Limp Bizkit actually presented me with a platinum album, which was awesome. That was sent to the IHRA banquet one year when I won the championship. That’s a pretty cool piece of memorabilia that I have, from Limp Bizkit to me. That song is always right up at the top of the list.”

You Can Do It – Ice Cube – “Y’all are going to think my musical taste is kind of crazy, but I love Ice Cube, especially ‘You Can Do It’. It’s at the beginning of one of the Friday movies. It’s Craig and his daddy and he said, ‘Now, Craig, it’s going to be different livin’ out here. Don’t let your cousin or your uncle get you into any kind of shit now, ya hear?’ Craig says, ‘Papa, I’m grown. Ain’t nobody gonna get me into no trouble.’ Then the song starts playing. Love that song.”

Back in Black – AC/DC – “I really like pretty much anything AC/DC. ‘Back in Black’ – who doesn’t like that song? That song will get you going. I like that a lot. I’m not a big concertgoer, but I have been to more AC/DC concerts than I can think of just because they are frickin’ bad to the bone. They know how to put on a show. It’s good stuff. ‘Back in Black’, ‘Whole Lotta Rosie’, everything.”

Feel Good Feelin’ – Ryan Daniel – “I’m not a big country music fan, but there are a few songs that I like. There’s a buddy of mine named Ryan Daniel. He has a song called ‘Feel Good Feelin’’. That is a great song. The title kind of says it all – it’ll make you feel good.

“Ryan is a really cool guy. He’s basically an independent artist. Former military guy. He was a part of Tops in Blue, which is the Air Force band. He’s got some good stuff – and I’m not a country music fan.”

Break Stuff – Limp Bizkit – “It’s a good song for a person like me who is not a morning person. That’s a good song for me when I first get up in the morning. Again, probably something that people wouldn’t think I like or listen to.”

Finally, Millican listed off a few of his favorites from the hip-hop genre.

“I like a lot of Dr. Dre‘s stuff. Eminem’s ‘Lose Yourself’ is another favorite. I like N.W.A.’s ‘Straight Outta Compton’, which became popular again here recently when the movie came out.”