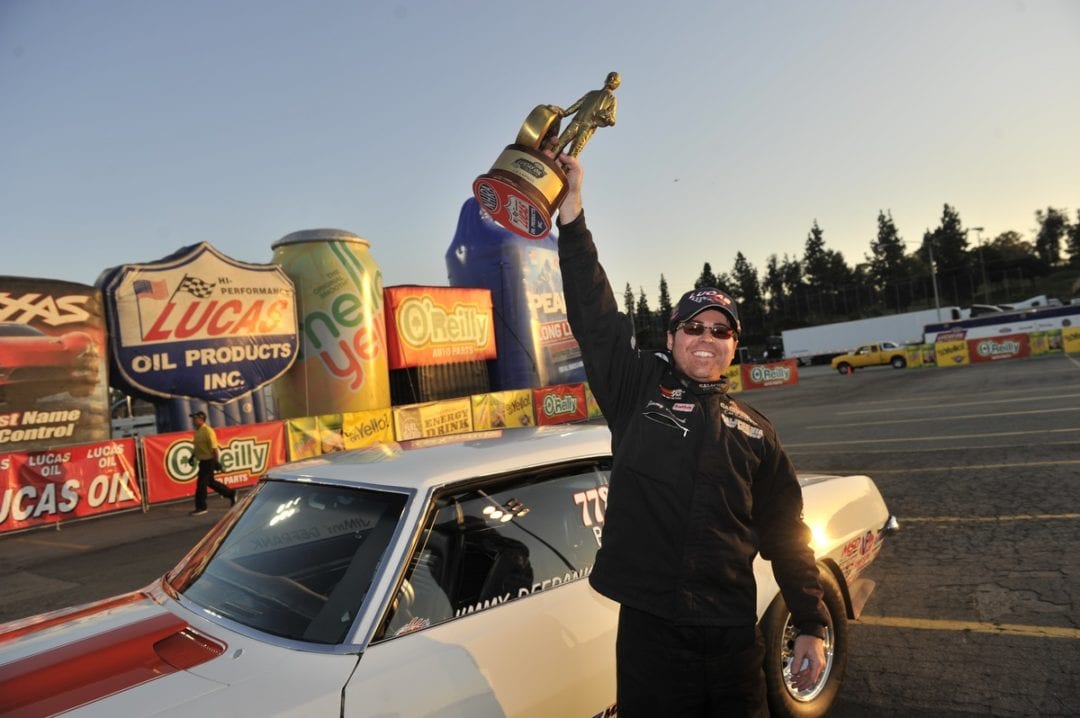 Super Stock and Stock Eliminator competitor Jimmy DeFrank first launched into drag racing in 1995 and won his first national event that year at the NHRA Finals. Two years later at the age of 19, he became the youngest driver in two decades to win a championship when he walked off with the Super Stock crown.

Since that time, DeFrank has won three more national championships in the Super Stock division of NHRA’s Lucas Oil Drag Racing Series, and accumulated a plentiful assortment of Division 7 season trophies and event wins. Celebrating 20 years of devoting a large portion of his life to the world of NHRA drag racing, Drag Illustrated sat down with DeFrank, the chief operating officer of California Car Cover Company, to talk about his life in, and out, of the driver’s seat.

How has racing changed for you since you first got behind the wheel two decades ago?

As a driver I think about each race and each run in so much more detail than I did 20 years ago. I also have a greater appreciation of having the opportunity to even be at the races and to have this chance to make all of these wonderful memories. Hopefully, we’ve become more knowledgeable through it all as well.

With so many national championships to your name, do you have high expectations when you enter any given season?

I’m not sure if I would say that the national championships caused it, but I do put a certain amount of pressure on myself and feel obligated to do well and try my very best at each race. I will admit that I screw up a lot and sometimes just plain lose some good races. But I do try to focus on every single run and race as if it was the most important. As a dreamer, I believe in my heart that we always have the chance to win—even when things look almost impossible. I think that’s a more optimistic and exciting way to look at things as opposed to just thinking about the pressure you put on yourself to win.

Is there anything in your racing career that you would go back and change if you could?

I would go back to the runs and races where I felt unfocused, and I would just remind myself to take a deep breath and focus on the task at hand instead of feeling stressed-out in that moment. Just slow down, prepare, and follow through with the plan. The toughest thing for me in my career has been staying 100-percent focused, and at times I have allowed myself to become distracted. Being 95-percent focused just isn’t going to cut it.

I’ve made mistakes. I’ve been late or red, I’ve hit the brakes near the finish line and allowed my competitor to pass me and win, but those mistakes happen and we learn from them. Unfortunately, you don’t learn until after the run, but I sure wish I could have been smarter in those split seconds.

How has this season treated you?

The biggest positive challenge was seeing that we had the opportunity to double up in Las Vegas this spring and then following through with nice runs in both Stock and Super Stock to do it. That has been the highlight of our season thus far, and one of the best of my entire racing career.

The biggest negative challenge has been struggling in Super Stock a bit. I’ve made some poor runs, and even when I’ve made some good runs, I’ve gotten beat. We just need to keep working hard to improve. It’s been a great year, but there is still room for improvement. This year we’ve made a more conscious effort in Stock Eliminator and have done a lot better, but I do wonder if it has hurt our runs in Super Stock a touch. In my heart I sometimes wonder if driving and focusing on one car would be better for me.

That Las Vegas double in Stock and Super Stock was the second time you’ve accomplished that in your career [first was in 2013 at the NHRA Winternationals]. Was the second just as exciting as the first?

It was. To be honest, it took several weeks for it to even set in. I don’t think I even have the words to describe how special that felt to me, especially with my dad, Jim, and mom Loraine there. It is so hard to pull off, but everything came together with true teamwork and we did it. We got the breaks when we needed them, my dad watched over everything and helped dial the cars with Jeff Taylor, who gave me plenty of calming advice, and my mom was standing on the starting line with her hands folded in prayer. It was really neat for me to see that later in the pictures and on the broadcast.

What has been racing’s greatest reward to you over the years?

Sharing the special moments with my family and dear friends, especially when we have the opportunity to win. Racing has brought my family and I together with some of the greatest friends that you could ever have. The biggest reward for me in terms of the racing itself is winning a national championship. There is no better feeling than battling for a full season and being able to hang on to that number-one spot at the very end.

Which racer has challenged you the most over the years?

Every racer is tough, and we can learn from each run. In my eyes, the toughest racer out there is Pete Biondo. He only gives the smallest window of opportunity to get by him, but even when losing to Pete I’ve learned a lot. When we were able to get by him during eliminations in Super Stock in Las Vegas this spring, I felt like we’d won a national event. He’s a good friend and a gracious competitor.

Have you ever wanted to move up to a pro class?

I have never had that desire. I absolutely love Stock and Super Stock and the way NHRA has formatted sportsman racing. The schedule allows us to focus on our business and family and then choose the races that fit that schedule. It has always worked out well for us.

Racing has always been a family affair for you and you also stay active in the family business. Is that difficult to balance?

I have always wanted to make my parents proud. My parents have shown my brother Tony and I more love than any kid could ever wish for and I love that we get to spend time together at the track. It makes me try harder to win because my dad loves the races so much, and he enjoys every moment; we all do. The best moments at the race track are always those first few minutes or hours after a race is won, when there are tears, hugs and celebrations. 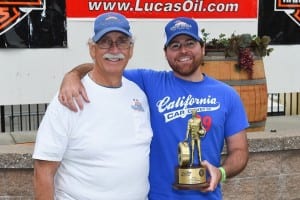 I also really appreciate being a big part of our family business, California Car Cover Company, and being part of the changes and processes that are helping us grow. It’s truly exciting and it’s interesting to notice how some days our accomplishments feel just as good as winning a race. But on the other side of that, some days it can feel like you’ve lost a race, too.

We continually change small things to try and improve, and sometimes you go back to something you worked on in the past to try to make it better again. It reminds me of testing a race car. You work on the engine, and then you try transmissions and converters, and then back to the engine. There are many similarities between business and racing.
Our family is growing, as well, with my brother Tony and his wife Meghan expecting their first child, a little girl, at Christmastime. I’m not sure how ‘Uncle Jimmy’ sounds yet, but that baby will be loved and spoiled so much.

Has this season overall met your expectations?

Each season always seems to have a different feel. Achieving the national event double-up was very special for us. We made a commitment to try harder in Stock and exceed our past performances in that category and we’ve done that before the year is even through. We’ve earned more national points in that class than we have in any previous season and no matter what happens the rest of the season, I’m thankful for this year. We just have to keep chipping away one race at a time and one season at a time, setting different and higher goals.