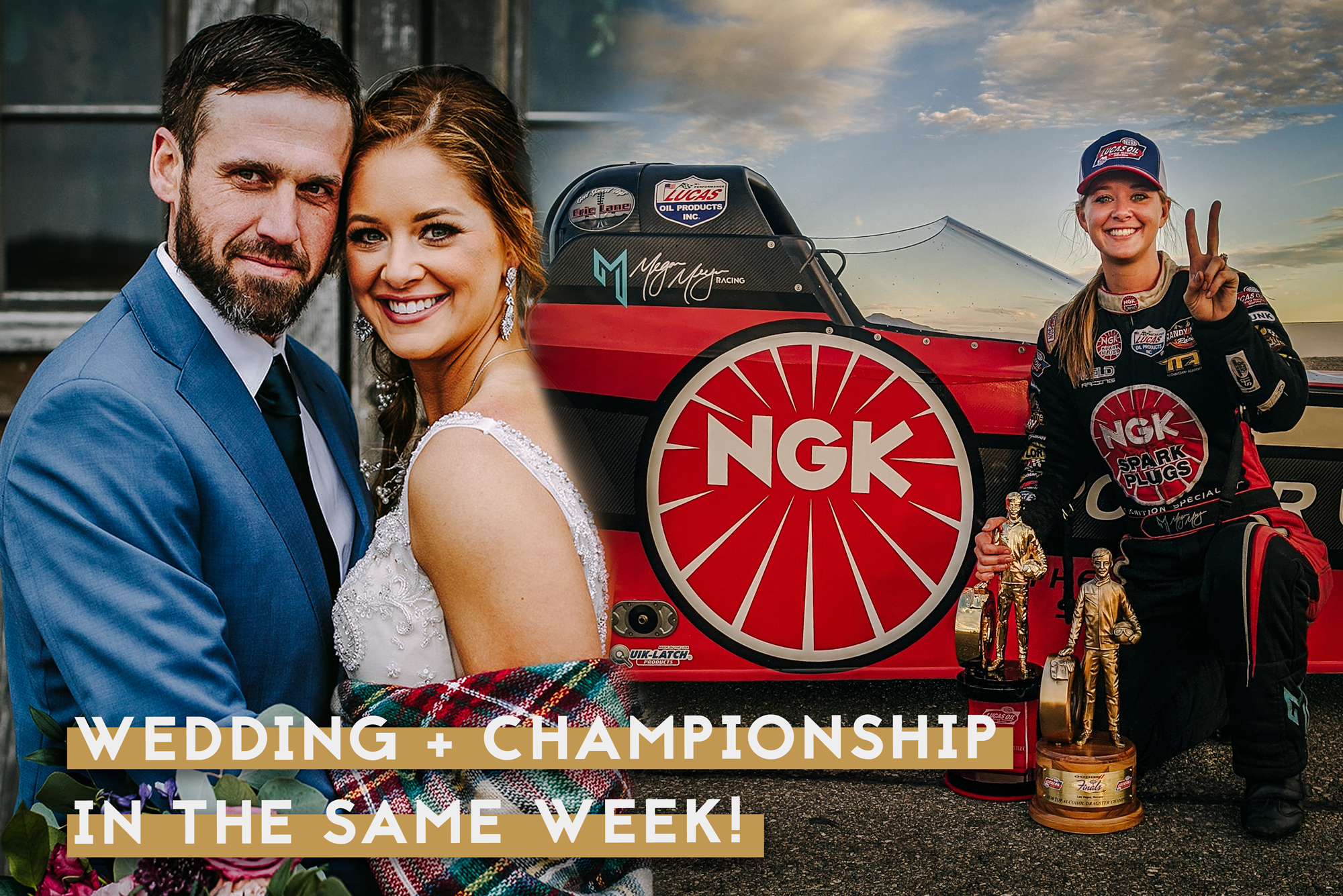 October was an exciting month for us… to say the least. I now know what my new breaking point is after dealing with the stress of my wedding and trying to win a second world championship!

The day after winning the Dallas FallNationals, we were driving home to finish up details for the wedding (which I had to create an indoor floor plan for the ceremony since the weather was calling for a high of 50 with high winds and rain), when my dad pitched the idea of flying into Houston to make a qualifying pass to get 31 bonus points. For the revised 2020 season, NHRA was counting 5 out of 6 national events for the national standings. At this time, Dallas was only my third national event of the year, and Vegas was to be my fourth race. Knowing that we could pick up 31 points by qualifying for the rescheduled Houston Spring Nationals and wouldn’t have to throw them away, we made the decision to fly into Houston Friday morning for Q1, then fly home Friday night. Thankfully my wedding was on Sunday – I’m so glad we did not have a Saturday wedding!

Friday morning I flew into George Bush Intercontinental Airport, got picked up by one of our crew guys that lives locally there, and then sat in the motorhome while it rained all day long. My flight home was at 7:30 that night, and after thinking of all of the worst-case scenarios that could happen, it actually happened. I literally sat there and was like pulling my hair out thinking, “OMG I’m not going to get to run, this was a huge waste of time, I should have stayed home so I can get more stuff done.” Finally the rain stopped and NHRA was able to dry the track around 6:00 p/m. I was hoping they would rush through Funny Cars as quickly as they could, but I was still at the end of the pack for Q1 since I was the current points leader, so I had to wait and watch everybody else run before I could get to run and I was just pacing back and forth, back and forth, I could not calm down, you can imagine how stressed out I was!

Unfortunately the original plan did not work; we didn’t get to run till right after 7 and then it was obviously way too late to make the drive to the airport which is about 45 minutes, then return the rental car, get on the shuttle to go to the airport, go through security, make it to terminal and get on the plane. I booked the first flight out of there Saturday morning for my dad and I. Thankfully it was a non-stop flight from Houston to Kansas City. We landed at noon on Saturday, which gave me just a couple of hours to run home, get all of our decorations loaded up in three vehicles, then drive an hour up back to the airport because we were getting married 15 minutes from there. We made it just in time for our rehearsal at the hotel and then, finally, Saturday night we got to relax and focus on the big day ahead. 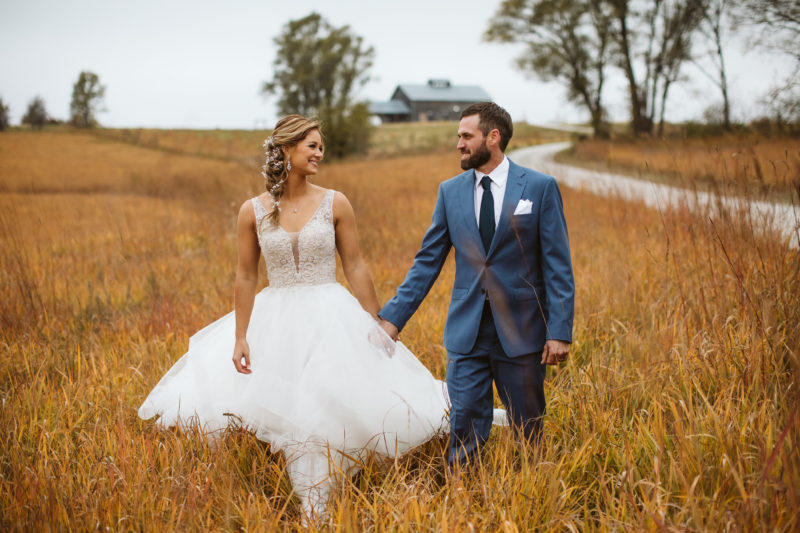 Sunday, October 25th, 2020 was a country/boho dream come true – other than the chilly weather outside. We got some beautiful photos in the field and had the most gorgeous flowers and decorations thanks to Wild Hill Flowers and Event Coordination!

Little did I know, we would be clinching the championship and winning the Vegas race one week later. This was my very first time racing in Las Vegas; I have never raced at The Strip at Las Vegas Motor Speedway before. I have been there many times only to work on the team as a crew guy for drivers like Julie Nataas and Bill Litton. We started off really great for the NHRA Finals and got the No. 1 qualifying spot with a 5.20 ET right off the bat. For Q2 we slowed down to a 5.23 at 269 mph, where we noticed a problem with the motor, so we had to replace it with our last spare block.

This new motor ran great for first round, running a 5.15 at 280 mph, but I was then set to go up against my teammate Julie. However, she was struggling with a motor that was having issues in first round, and after seeing that it blackened all of the bearings, we could not make any more passes on it unfortunately, and we did not have any more spare blocks. We’d been on the road for a little over a month before we went to Vegas; from Gainesville in September, to Dallas, then Houston, before Las Vegas. We had burnt up motors at almost every single one of those races, and we just put a new motor in Julie’s car in Houston. You would think that the parts would last a little bit longer than that because we’ve only been doing half as many races as originally planned, which goes to show you that we’ve got to stock up as much as we can to run races across the country and use what we brought, and unfortunately we used it all up.

I got a single pass in second round, which moved me onto the semifinals on Sunday to take down Jackie Fricke running a 5.20, then we moved on to the finals against Joey Severance. In one of the most dramatic races of the year, Joey defeated Shawn Cowie on a holeshot after banging the blower and coasting to the finish line. This was a perfect scenario for us because that opened up the gates for us to take back the points lead that we lost in Houston after Shawn won the race. Joey had a lot of damage after banging the blower, and he was also out of parts because he’s been on the road for a while too, so it’s just kind of crazy that this stuff happens at the end of the season when you run with what you got and when it’s done, it’s done.

So, Joey typically would have just said I’m broke, and it would have been a single for me, similar to Julie’s situation, and I would have had a freebie to the Winner’s Circle. But that did not happen because Shawn donated a spare motor to Joey so Joey would be able to make the race! What is crazy is that Shawn runs a Brad Anderson motor and Joey runs a Noonan engine. It’s a completely different set up that they had to put on the complete fuel system, ignition and timing, and a bunch of wires and Racepak stuff to make it actually fit and work with Joey’s car since everything was on the opposite side and nothing would reach.

We were just as excited that they were giving it a shot and that they were actually working together, probably for the first time, to make the run – it’s just the coolest thing ever because at the end of the day we are all one big family here trying to do the same thing. Joey got me on the tree with a .015 reaction time and I had my worst reaction time with a .176. I got distracted on the starting line thinking this is it, this is my very last race of the season, of the year of Covid-19 and all the madness that has been going on this year, and that it was my last race of my professional driving career from 2016 to 2020. This was my last chance to go out on top, so it was very, very, very emotional for me going into the final round of my last race, and actually my first and last time ever racing in Las Vegas. All we had to do was win the race and we would get the championship. If we did not win the race, we would not have gotten the championship – it was that close.

As you know, we won the race! Joey had problems trying to shift it into second gear and it died, while we ran another 5.20 at 281 mph for the top speed of the event and the rest is history. We are now the two-time world champions for the NHRA Lucas Oil Drag Racing Series’ Top Alcohol Dragster class, and I am now officially retired and will be leaving for my honeymoon this week!

It was a full-circle moment for me getting to race Joey in my final run of my career, being able to race against the guy that has been the champ almost the entire time I have been racing in Top Alcohol Dragster. It just goes to show how much progress my team has made over the past couple of years, all the hard work and time and money that they’ve put into this NGK Spark Plugs car.

And for one last time I want to thank NGK Spark Plugs, Lucas Oil, Technician.Academy, GUNK, Jiffy-tite Motorsports, ARP, Aeromotive Fuel Systems & Waterman Racing Components, WELD Racing, Brad Anderson Enterprises, Taylor Cable Products/Vertex and so many more for helping me out along the way. Some have been with me ever since I started racing Jr. Dragster 17 years ago. Without their parts and funding, it would not be possible at all for us to be the record holder and 2x world champs.

And of course, thank you to NHRA and the Safety Safari team for putting on such a great sport for us to compete in. I am very excited about my next season of life and I am grateful for ending it on top. I just want everyone to remember that I am stepping away for my own reasons. I want to give 100% of my time and effort to my marriage and to my future children. I’m just so thankful for all of the opportunities that I’ve had over the years representing the Randy Meyer Racing Team.