Fifteen years ago, I made my first pass in a Junior Dragster. It was a day I will never forget. It was on a Wednesday night at Kansas City International Raceway (KCIR) approximately 45 minutes from our house. I remember my dad telling me if it feels uncomfortable or spins the tires, lift off the gas. I knew exactly what to do – I’ve seen my dad and older cousins go down the strip hundreds of times. As I watched the amber lights fall, I smashed the throttle and cruised down to the eighth-mile at 30 MPH. It was so thrilling! 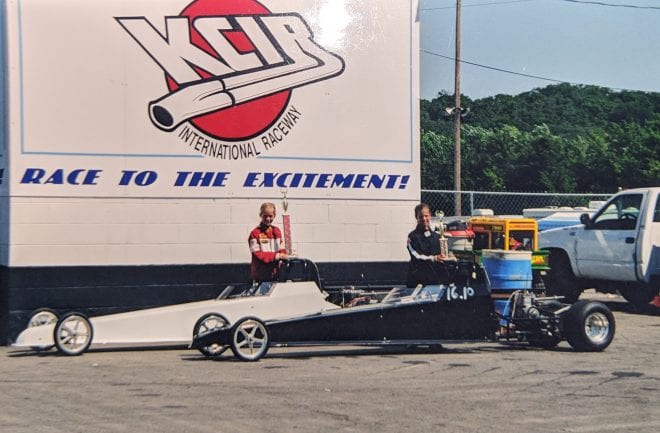 I began racing at the age of 10, after my sister Rachel turned 8. Junior Dragsters was a completely new monster for us to tackle but thankfully we had the support of three of my older cousins to help guide us. We used a rollback tow truck from my parent’s business to pick up two Juniors and all of the parts and tools we needed to run. I remember I had acquired an old firesuit and safety equipment, and put on the entire outfit and wore it the whole drive back home. I didn’t even take off the neck collar to go to the restroom. Looking back now, I probably looked like a clown, but I didn’t care, I was so happy that I finally got a race car.

A few days later we visited one of my dad’s oldest friends who owned a motorcycle shop to get a pair of helmets. We were set. That weekend, my sister and I strapped back into our Juniors and competed in our first race. There was only the two of us, so we got to race against each other for trophies, and bragging rights. That day I got the win, and the following day (after a few more cars showed up) I got a runner-up finish. 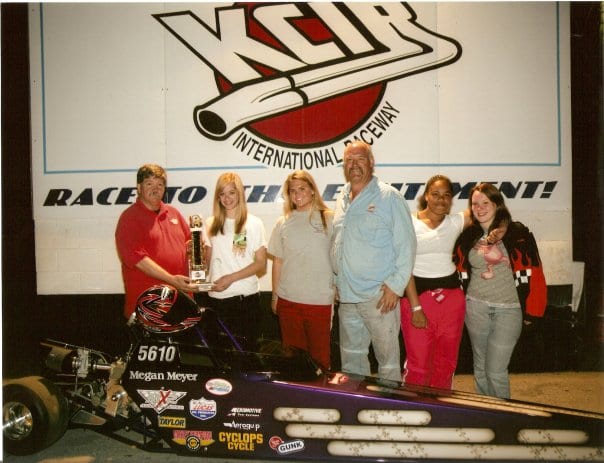 We would visit KCIR every Wednesday and Friday night to test, and then race each Saturday and Sunday that we could. Sometimes it was only my mom who could take us. Two years later, when I could move up to the 13-18 age group, I got a newer Junior Dragster with a faster motor. This Junior was then passed onto Rachel when she entered the class, and we still have it to this day. When that happened, we got a newer car from a friend that had just graduated the class and I had it painted my favorite color: purple.

Immediately after I got my driver’s license, I would take the truck and trailer up to the track with Rachel and a friend and we would go racing. We didn’t rely on our parents to drive us to the track, change the oil, polish the cars, etc. They were off following my dad’s dream of winning the Top Alcohol Dragster Championship. I believe this is what sets us apart from other racers – we truly were dedicated to the sport.

I had struggled for years with red lights, breaking out, being way off my dial-in, slow reaction times, bad clutches, etc. I always saw the other kids who were unbeatable and wanted to be one of them someday. I finally had a great year and accumulated enough points to win my first points Championship at KCIR in 2009 and it was the happiest day of my life. I learned how important a routine was in the pits and on the starting line and used that knowledge to get my second Championship the following year.

2010 was also the year I got a Super Comp dragster. Again, we had no clue how to operate a car with a delay box and throttle stop – these were all foreign terms to my dad. But we had help from my uncle and other Super Comp racers from Kansas City to help us figure it out. It was a blast racing two completely different cars in the same weekend. I would have to be first in line with my Junior, make a pass, rush back to the trailer, grab my helmet and run to the staging lanes to hop in my Super Comp car that was waiting to go down the quarter-mile at 170 MPH. 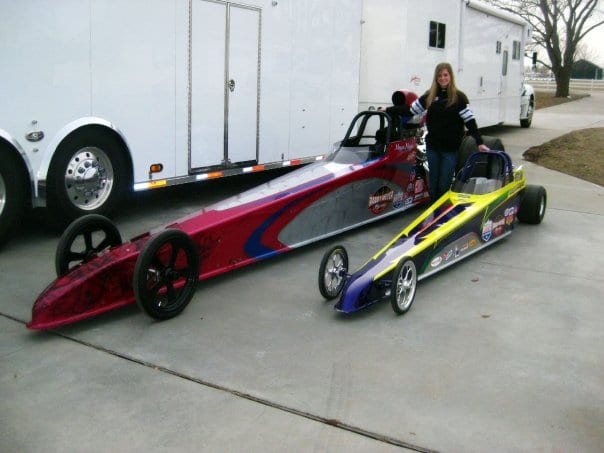 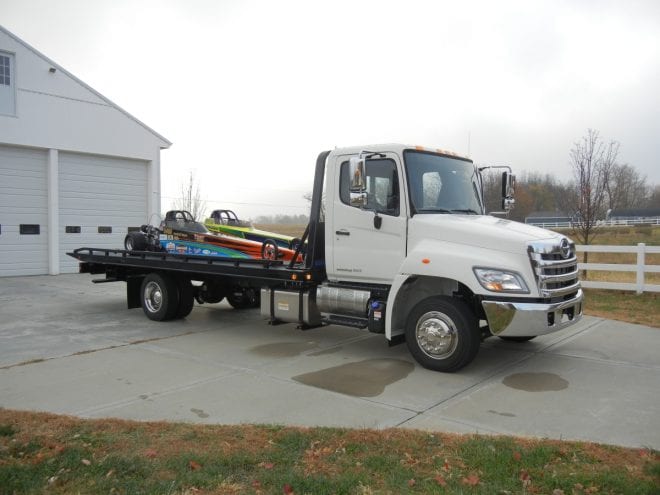 My final year of Juniors came in 2011 when I turned 18, graduated from high school, and the track had announced that it was closing. I was devastated when I heard the news since it was the closest drag strip to our house and we had so many memories of racing in Kansas City. For the final race of the year, we loaded our Junior Dragsters on the back of a rollback tow truck, just as we did when we first began this journey. It was a cold, damp day that matched our feelings as we drove to the track. I was sitting second in points and ended up running the guy who was leading points in first round. All I had to do was beat him and win a couple rounds and I would clinch the Championship. I was too excited about winning my third Championship that I didn’t pay attention and broke out by a ton. I was so devastated, I had just lost my last Junior Dragster race in the first round. I couldn’t believe it, but there were no buy-backs or second chances. I was done and had to move on.

It was an upsetting way to end my Junior Dragster career, and there are times I still think about that day. It reminds me to always stay focused and don’t think about the points or results until after the race is over. 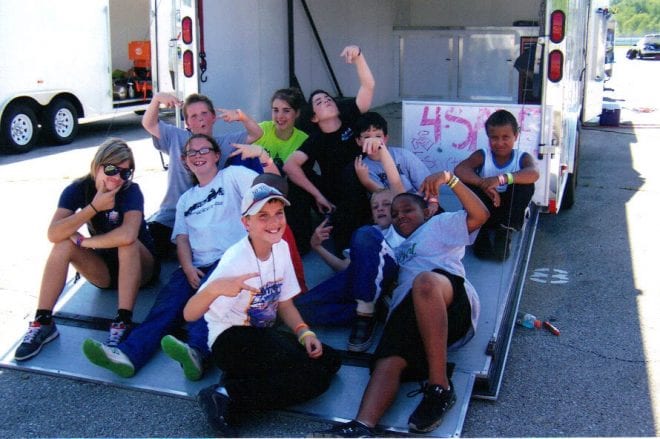 Racing Junior Dragsters has always been my favorite type of racing. The camaraderie we built between other families in this area allowed Rachel and I to race on our own with the help of other parents while ours were following the NHRA tour. We are all still loyal, trusting, and enjoy each other’s company to this day even though not all of the kids we raced against stayed in the sport. But the ones that did have made huge strides in their racing careers. You can find them as points chasers and Champions in the NHRA Lucas Oil Drag Racing Series or even crewmen on Top Fuel teams.

These memories will last a lifetime, and I will always do anything I can to give back to other racers so they can have lasting memories as well. Racing Junior Dragsters is a very serious and competitive sport, and can make or break relationships between racers and tracks. Building up a solid foundation like we did makes for a great launch pad for a professional racing career. 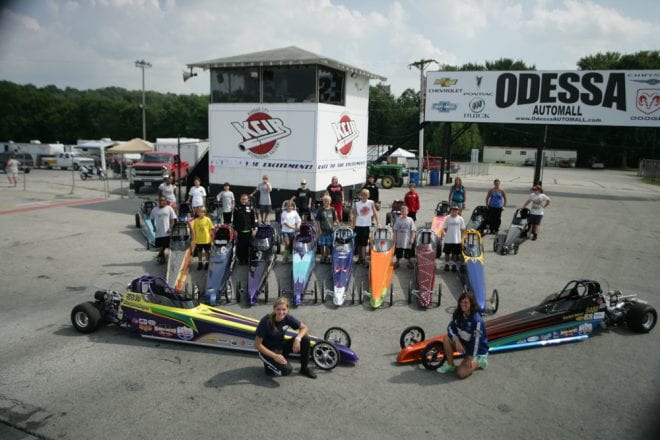 Yesterday I saw on Facebook that Heartland Motorsports Park, my current home track, is having thoughts of relocating the track from Topeka to Kansas City. I believe that this will be a good move for all of the racers who live closer or in Missouri. However, it may be a couple of years before we have an NHRA track in the Midwest if he does close it down. I also have many good memories of racing at Topeka with Juniors, Super Comp, and Top Alcohol Dragsters, but I understand Chris’s financial decision even after he spent millions to improve the facility. Hopefully he will come to an agreement with the city and we can continue to do what we love.