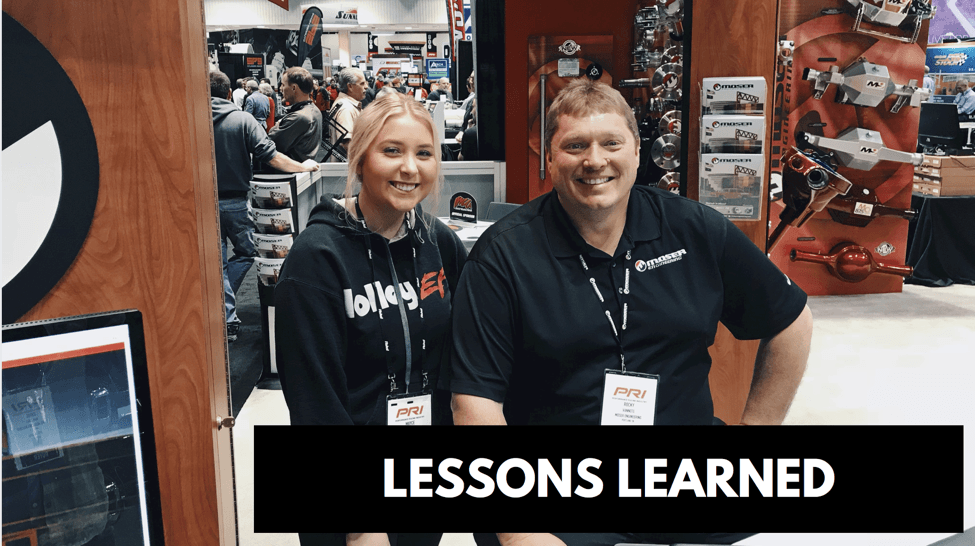 I do not know if it is just me, but every New Year’s Day I just always think, “we’re going to be racing again this year.” Because you can’t say that in December. Right? That is just a Mayce thought that does not have a lot of context that I figured I should share.

I have a lot I would like to share about 2019, going into 2020, but first of all I want to talk about PRI. I started going to that show at 14 years old, right when I started racing. I remember walking into those doors of one of the big rooms thinking “wow, there is a lot more that goes on than just going down the track.” I mean, I was 14. At the time I was not fully exposed to the automotive industry. And walking into something that is truly surrounded by your passion like that is pretty eye-opening.

Before getting into the show, I should mention who is up in the picture above. That is Rocky Van Note, who works for Moser Engineering. He is a pretty cool guy who I have been able to get to know through the years of driving the Moser Engineering Jr. Dragster. The Moser booth is one of our first stops at the show to say hi to him, Tim Irwin, Rob Moser and everyone else in the Moser family.

Another experience I remember from that year is that I remember thinking “wow, Dad really knows…everyone?” I felt like every booth we passed by, Dad knew someone in there. That has everything to do with our family business, and his respectable people skills. It is safe to say that I have learned a lot from him just by going to this show, learning how to talk to customers and suppliers. It is safe to say that honing that networking skill has helped me get where I am today. And by going every year to this show, I was introduced to all these people.

One of them, for example, is Shane Turner. I met him when he was working for Edlebrook, and ever since then we have been pretty cool buds. Through the years of having that connection, he has helped me with letters of recommendations and mentoring me about getting sponsors. And he has dealt with me giving him a hard time about literally everything, so it works out pretty well. My point here is networking can really lead you down roads you did not think existed. Another great example is why I am here today is writing this blog. If I never went to PRI and met the awesome people behind Drag Illustrated, I highly doubt I would have had the amazing opportunity to write these blogs.

One year, I wanted to help out in the PBM booth. So I stood in front of the booth and passed out samples of their products, and I talked to so many people. One person in particular was Angel Hardaway. You want to know how we became friends? It is because we were wearing the same shoes. Since then we have become pretty close, and we motivate and support each other. If I was not at the show that year, we probably still would not have met. And she’s a good one to have in your life so I am pretty thankful we met. Not to mention she has been writing her own blog, and has done a really good job with it so far.

PRI was definitely a good one this year! Thankful for everyone I get to see every year and the opportunities that come along!

One event a lot of people look forward to at PRI is the 30 Under 30 press conference. I went to it this year because that is a huge goal of mine to make it in that honorable list. You are in a room full of extraordinary young people that have made some big strides in drag racing, and you want to learn from them. Something I have always believed is that no matter your upbringing, you are capable of achieving anything. I am referencing Top Fuel racers rising up to the ranks from Jr. Dragsters, and I am also talking about bracket racers like Matt Dadas and Gage Burch, the two on the cover of the 30 Under 30 edition. It is cool to think about people that I race with occasionally can make it on the cover of a prestigious magazine. I can’t imagine any bracket racers not wanting to look up to them or anybody on that list.

I know I have left out some people in this blog, and I will probably hear about that later. My honorable mention is one of my friends I met through Jr. drag racing, Chris Mullins. He always gets mad that I don’t do an entire blog about him, and I get mad he won’t let me drive his race car. Anyways, every year at the show is a good way for us to catch up because we live like 6-7 hours away from each other and do not race at the same track anymore. I have learned that sucks with some racing friends that I have met through the years. A lot of them live pretty far away and it is hard to spend time with them outside of the track.

To sum up what I have said, if you are in the automotive industry and have never been to PRI, GO. You do not know who you are going to meet and where that can lead to. One thing I did learn this past year is to take pictures. There are so many people I met with that I wish I took pictures with. In my next blog I am going to talk about my 2019 and what is up in the works for 2020.