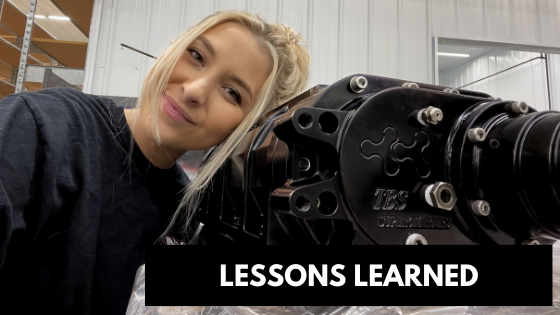 Before I start, yes that is a Blower Shop 250 supercharger that is getting put on my car this year!

Here are 3 things I learned last year about my driving from having a GoPro mounted on my car.

I have a tendency to veer over to the left a little bit after the 330 ft. mark sometimes. I have a video that shows the little more extreme side of that here on our Nyes Racing Engines TikTok page. I never noticed how bad it was until I looked at the footage and it straight up shows me that I am not keeping it straight. It is not that noticeable if you are standing on the starting line and watching it most of the time, but you can see it on camera. Any racer should know getting out of the grove like that can slow down your E.T. and can potentially be very dangerous. Especially this year with putting that blower on my car, my first priority should be keeping that thing dead straight.

We’re more than ready to get back at the track. Any bracket racers or fans here? ##racing ##enginebuild ##dragracing ##gofast ##fyp ##foryoupage ##xyzbca

So why was I doing that? Typically with going 4.60s I am the faster car. Going down the track, my opponent is mostly in front of me the whole time. I don’t typically look back and forth quickly between what is in front of me and where the other car is at. I usually do that if my opponent is behind me. Instead, what I am doing is just staring at the other car. By doing that, I lose focus of where I am at on the track. Yes it sounds pretty irresponsible and maybe a lot of bracket racers on here are going to give me crap about it, but it is a learning process and I still have a lot to learn. I have a couple strategies this year that I am going to try and see if I can really nail that problem down. If I see that it works, I won’t keep my findings a secret.

Another issue I was having was hitting the tree consistent all day, then completely missing it one pass. How you let go of the transbrake button is crucial to the consistency of your lights. If your reaction times are all over the place, pay attention to how you are letting go. I hold my thumb a very specific way on the transbrake to help the consistency of my lights, but it is all in the matter of how your finger comes off of it. On one pass I went over on the GoPro, I saw that when I let go, my hand came up to where my temple would be on my head. On another pass, I let go and my hand came to my chest. That means, my thumb came off the button differently both of those passes, and my lights were way different. Also, hopefully most racers know this, pay attention to how hard you are pushing down on the button. If you have a death grip on the button, it takes longer for your finger to let go and for the button to activate. Pay attention to both of these and keep one method consistent.

I also did notice that I would make my decision to kill some numbers just a tad too late. Not necessarily after the finish line, but I would be lifting my foot up to give it a rip too close or at the finish line. I used to want to be completely around the other car before I whomped, but I learned that doesn’t get you anywhere. That wasn’t a huge issue in junior dragsters, but I learned you can’t get away with that in large scale dragsters. I learned that quickly especially after getting handed so many tickets of me breaking out. I have gotten way better at that, it just has been a major learning curve on how to judge the finish line in a 4.60s dragster compared to a 7.90s junior dragster.

You may not have learned anything from what I have said, but it is always something you should keep in mind. The lesson learned here is learn from your mistakes. I have said that a million times because I have made a million mistakes. If I didn’t screw up so much, I wouldn’t know some of the things I do now. Also, get yourself a GoPro because you might surprise yourself with what you find.

If anyone has any suggestions for me, I am always open to hear it. Or if you have something you would like for me to talk about that can help some racers, please let me know!