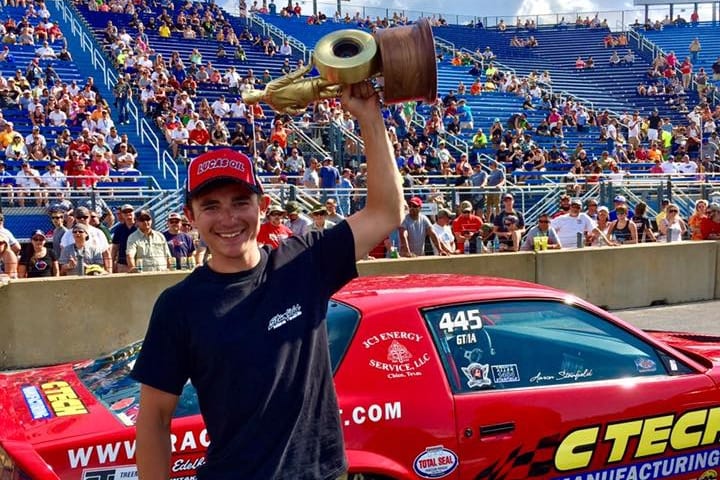 Growing up watching his dad battle in the NHRA Sportsman and Pro Stock wars instilled a deep love of doorslammer racing in Aaron Stanfield. And now the 22-year-old is successfully following in his father’s footsteps, driving the same ’87 Camaro in which his dad, Greg, won three consecutive Super Stock national championships in the early 1990s.

This year, Aaron continued the Stanfield family winning tradition, securing the NHRA Division 4 Super Stock championship and finishing fifth nationally in addition to placing 10th in Div. 4 Top Dragster and 23rd nationally. Those title runs included SS wins in the national event at Chicago (with his father in the opposite lane for the final) and the divisional at Dallas, plus a Top Dragster victory in the national event at Bristol, Tennessee.

“That race in Chicago with him was definitely one of the coolest experiences of my life in racing,” Aaron recalls. “And it was a cool deal (at Bristol) because it was Father’s Day and I won in Top Dragster and my dad runnered up in Super Stock. Those were both great days.”

For 2018, Stanfield plans to defend his divisional title and improve his national standing in Super Stock and hopes a new 769 c.i. Miller dragster will lead to a much better year in Top Dragster. Beyond that, as long as it’s drag racing he’s up for the challenge.

“To be honest, as far as goals go I would really like to see our business, Stanfield Racing Engines, grow into something really good,” Aaron says. “For racing, my roots are in Pro Stock, of course, but Pro Mod, Funny Car, Top Fuel; I would no doubt love to go 330 miles an hour. I’d even drive a Pro Stock Bike if they’d let me. But not Top Fuel Harley; those guys are crazy!”