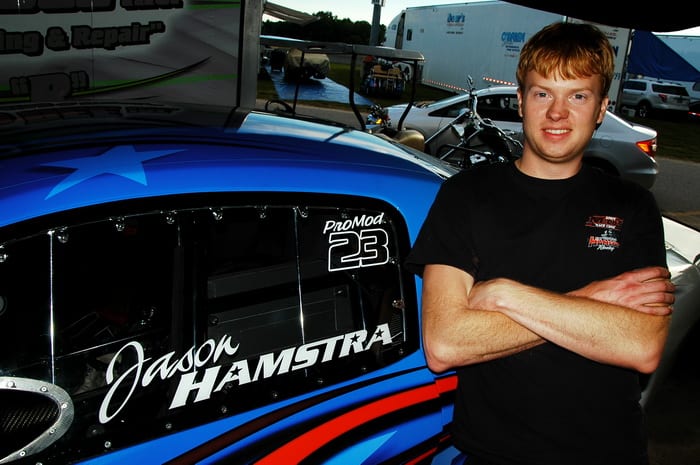 A decade ago, a young Jason Hamstra shot to the forefront of Pro Mod, back when the class was still primarily contested in IHRA. He was a groundbreaker as one of the first to utilize a torque converter with a blown application. Not only did he and his team venture into uncharted territory, they did so successfully, paving the way for what is now considered a go-to combination by top teams in the industry. In 2009, Hamstra was named the ADRL Pro Rookie of the Year and then in 2011, Hamstra clinched an impressive ADRL Pro Extreme World Championship. He was one of the youngest to ever win an ADRL title at just 24 years old. In recent years, Hamstra has stepped back from chasing Pro Mod series points, but maintained a presence across IHRA and NMCA.

Now at 29 years old, Hamstra has been the talk of Chip King’s comeback. He teamed up with the veteran Pro Mod racer halfway through last season and has almost singlehandedly orchestrated one of the most successful seasons of King’s career.

“I’ve known Chip since I started racing Pro Mod,” Hamstra explained. “We ran IHRA together, back in the mid-2000s. And then he was kind of looking for somebody and I was available at the same time so we just kind of hooked up and it worked out.”

The humble Indiana native tuned King to an impressive victory at the U.S. Street Nationals in Bradenton and a 16th-place finish in the NHRA Pro Mod series, despite missing the last event of the year.

For Hamstra, it’s tough to pick one over the other when it comes to driving and tuning. He enjoys both and has proven his proficiency behind the wheel and behind the car. For the past few years he’s run a 2010 Mustang, but this season he purchased a ‘69 Camaro built by Alan Pittman. In the six races he drove in his own Pro Mod machine this year, he went to five finals, winning three.

“They’ve got 12 NHRA races now, so we’re planning on hitting them with Chip’s car. We’ll probably hit a couple of races over the winter down south, in Florida, and then maybe a couple PDRA races during the year, but mainly the NHRA race schedule with his car and then I’ll run at the IHRA races with my car and then local Quick 8 stuff. We run that car a lot so whatever I can have time to run mine is what I’ll do.”

Still under 30 years old, Hamstra already has over a decade of experience in one of the toughest categories in drag racing – experience that has led to accomplishments many only dream of throughout a lifetime racing career. This November, Hamstra added another major accomplishment to his growing list when he married wife Patsy. Congratulations to this newlywed and newly crowned 30 Under 30 recipient.