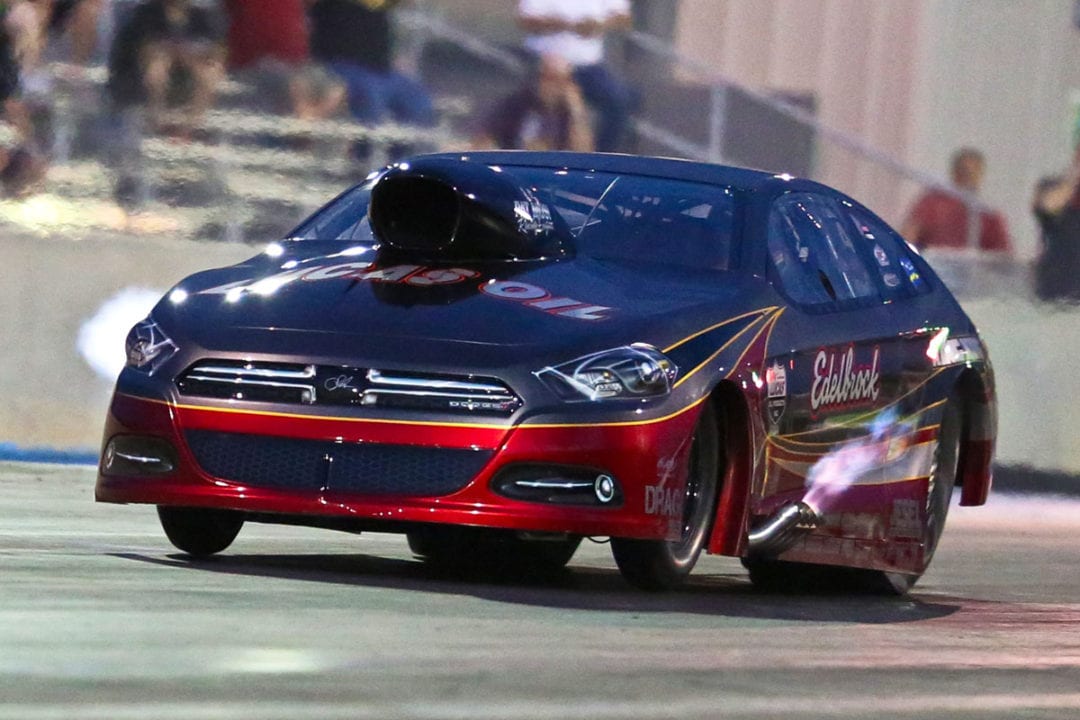 Despite a strong run of 3.700-seconds at 207.18 mph in the Frank Brandao-owned Edelbrock/Lucas Oil “King Kong 7” 2018 Dodge Dart, Lizzy Musi fell in a close first-round matchup in Pro Nitrous against Tommy Franklin. He went 3.653 at 207.94, which was the quickest run of a race that stretched to three days because of inclement weather.

After qualifying seventh with a 3.845 at 203.74, Musi and the rest of the field raced in more ideal conditions during eliminations on Sunday. Musi’s run would have topped anyone else during first-round action and all but one other run of eliminations, but it wasn’t enough against Franklin as she fell to sixth in points.

It also snapped her streak of three straight final round visits – counting her back-to-back wins in Street Outlaws: No Prep Kings – but Pat Musi remains confident.

“It just wasn’t our weekend,” Pat Musi said. “We had the second-quickest run of the round and third-quickest of eliminations, but we ran against the driver who made the quickest run of the weekend. That’s just the way it goes sometimes, but hopefully things will start to swing in our favor. It just shows you how important it is to qualify well and we weren’t that far off, either. We’re still very confident in the car and this team, and we’ll come back firing at the next one.”

The good news is Musi won’t have to wait long to get back on track. She’ll get back behind the wheel of her Edelbrock-equipped “Aftershock” Camaro on July 12 as part of the No Prep Kings stop at Firebird Raceway in Eagle, Idaho.

A week later, Musi returns to PDRA action at the inaugural PDRA Northern Nationals presented by Callies, July 18-20 at Dragway 42 in West Salem, Ohio. It is the fifth of eight races during the 2019 PDRA season and a two-month break follows the event, putting a premium on performing well. But despite racing two straight weekends in two different cars, Pat Musi knows the team is plenty capable of sweeping both races.

“We have two good, fast cars and we’re still very confident that a PDRA win is coming soon,” Pat Musi said. “Hopefully we can get everything to go our way at the next one, but we definitely have a car that can run at the top. It’s going to be tough racing back-to-back weekends in two separate cars, but Lizzy has proven she can adjust to each one pretty quickly and she’s done a great job driving both cars. We’ll be ready to go.”