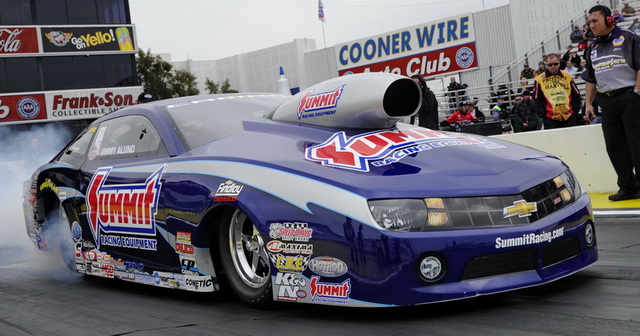 Sweden’s Jimmy Alund is playing a significant role in the world of NHRA Pro Stock for the early part of the season as he pilots the Summit Racing Chevrolet Camaro typically driven by Greg Anderson, who is out for the first three months as he recovers from surgery.

Alund may be a somewhat unfamiliar face on the tour, but he came to the game with no intention of warming the bench and earned a chance to race for the title at the first race of the 2014 season of the Mello Yello Drag Racing Series, the 54th annual Circle K NHRA Winternationals at Auto Club Raceway at Pomona.

Alund overcame the challenges of learning a new car and qualified the second blue KB Racing entry in the No. 10 spot with a best time of 6.546-second at 211.86 mph. For his efforts, he scored a first-round match with fellow Chevrolet Camaro pilot Shane Gray.

In their mid-morning meeting, Alund was eager to nab the first win light of his career. Unfortunately, he was perhaps a bit too eager and illuminated the red light by .014-second and forfeited the win.

“I think this is only the third one [red light] in all my days,” said Alund, who explained that the LED lights on the Christmas tree, NHRA’s timing system, were different than the system used in Europe, where he is an eight-time FIA Pro Stock champion. “It’s a little different here, but that’s okay. That’s racing.”

Alund’s teammate for the time being, Jason Line, won the Pro Stock portion of the event and dedicated the win to Anderson.

Taking over the controls of a car driven by a competitor who possesses a plentiful collection of NHRA Wally trophies in sizes both large and small might be intimidating, but for Alund, joining the KB Racing team has been a natural fit. After all, he has been competing with KB Racing power beneath the hood of his own championship Pro Stocker for a year and a half and won the European Pro Stock championship with KB Racing power in 2013.