Eager to get the 2015 race season started, David DeMarco made the pilgrimage from his hometown of Boston, Massachusetts to Bradenton Motorsports Park in sunny Florida this week. In preparation for the upcoming U.S. Street Nationals race, DeMarco finally put some test hits on the newest iteration of his infamous ’87 Buick Regal.

Now sitting on a set of radials, the car, known as “Big Black”, went under the knife during the off season and was converted over from its old 540 CI big block, twin turbocharged configuration to a powerful roots blower setup, courtesy of Dennis MacPherson at DMC Racing. The new motor, a mechanically injected, blown alcohol 526 CI Hemi, was built by Bob Mason at Mason Racing Engines. Also new for 2015 is a beautiful two-tone paint scheme that adds an understated touch of class to the wicked beast. 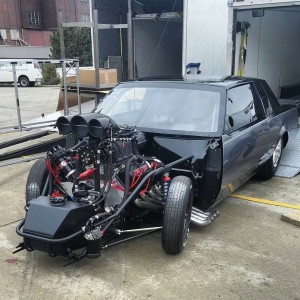 After so much downtime during which he focused on perfecting the new platform, as well as getting the car as light as possible, DeMarco finally strapped in. “That f*cker is loud! I like it, but it’s pretty humbling to be behind the wheel of that thing. My first burnout was crazy. It’s just brute power, not like the turbos where it comes on gradually. This is like a light switch – it’s either on or off,” he says of his first experience mashing the go pedal with the new blower setup.

Thanks to some help from his twin brother Andrew, crew chief/tuner Lonnie Houde, and suspension guru Mark Menscer, DeMarco’s initial test passes yielded some strong numbers, including a 4.18-second eighth-mile run. That wasn’t good enough, though, and DeMarco pushed even harder to see what the car could do.

True to his “go big or go home” nature, DeMarco came out and expertly drove his way to a 4.12 at 184 mph final number with a 1.09-second 60-foot. “That was the quickest I’ve ever run. Prior to this, I had only gone 4.21 with the turbo setup,” he tells. Not only was this a new personal best for DeMarco, but he also (unofficially) scored the title of having the world’s quickest blown radial car.

“We really like what we’ve seen so far,” DeMarco explains of the car’s recent performance. “There’s still a lot left in it, and I don’t even know how far we’ll be able to push it. The car is showing really good potential. I’m just concentrating on getting acclimated behind the wheel, and we’ll just keep chipping away at the numbers.”

After such a stellar preliminary performance, DeMarco plans to lay low until the start of the U.S. Street Nationals race this weekend. “Now we’re just going to nut and bolt the car and make sure everything’s working. We’ve got three rounds of qualifying on Saturday, and then we’ll race on Sunday. It’s been a long week already. It’s hard work being out here, but we’re having fun doing it,” he states.

Next on DeMarco’s calendar for 2015 will be Donald “Duck” Long’s “Lights Out 6” race at South Georgia Motorsports Park in late February. After, he’ll head back to Boston to make a few small changes to the car, including adding a new belt guard from DMC. DeMarco blew the blower belt off during this week’s testing. “I short shifted the car, and apparently it didn’t like that,” he laughs. From there, his primary focus will be on following the NMCA event schedule.

The 2015 season is shaping up to be a promising one for DeMarco, and he’s more than happy to be running on radial tires. “I’m loving the radial stuff. It’s so smooth! I’m probably never putting a slick back on the car,” he confirms. There’s no doubt he’ll be lowering that personal best ET yet again soon enough, and we expect to see DeMarco shake things up in the radial world with Big Black even more.