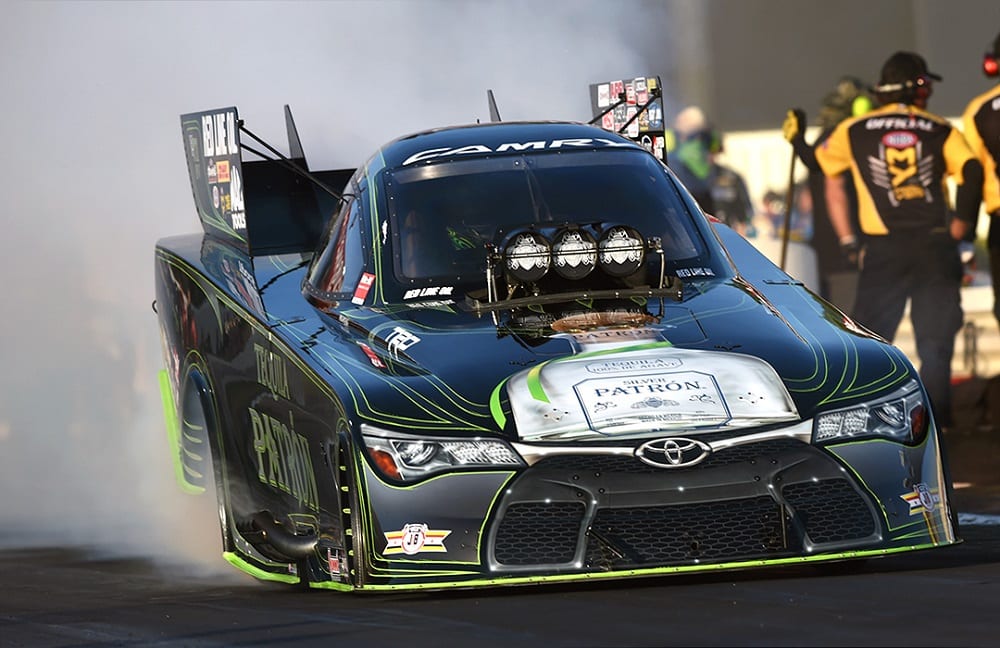 Only one race stands between Alexis DeJoria and her opportunity to make a run for the 2016 Funny Car Championship, the NHRA U.S. Nationals. DeJoria, who missed the past two NHRA Mello Yello Drag Racing Series events due to a pelvic fracture suffered during a crash at Sonoma Raceway in July, will make her highly anticipated return this weekend in Indianapolis.

As of August 29, DeJoria has received medical clearance from her team of doctors as well as NHRA’s medical staff to return behind the wheel of her 10,000-horsepower nitro Funny Car.

“I’m so excited to finally get back in the seat on Friday,” said DeJoria, who has been undergoing physical therapy and receiving low-level laser treatments as well as pulsed electromagnetic field therapy in an effort to heal as quickly as possible.

“I’ve really been missing my guys, my Kalitta teammates and my fans. Not to mention, the 10,000-plus horsepower machine I’m fortunate enough to drive 24 races a year. I missed two of them this season, but I’m back now, and man, what a race to come back to- Indy, ‘the Big Go.’”

DeJoria enters the U.S. Nationals, the final event of the NHRA’s regular season, sitting in the No. 10 spot. In order to qualify for the NHRA Countdown to the Championship, DeJoria must finish the weekend inside of the Top 10. The 11th and 12th ranked drivers are hot on her heels, trailing her by 87 and 115 points respectively.

With the U.S. Nationals’ unique points-and-a-half format, the pressure is on for the four-time Funny Car winner and her team as they look to deliver their third consecutive Countdown to the Championship playoff berth.

“It’s so crucial for us to do well in order to be able to finish out the weekend in the Top 10 and qualify for the Countdown to the Championship. I know we can get it done. I have a lot of faith in my guys, we just need to get that consistency back. If there’s any race where we can pull it off, it’s Indy,” said the Kalitta Motorsports Funny Car pilot, who won the celebrated 60th running of the U.S. Nationals in 2014.

While fighting to retain their spot in the Top 10, the Tequila Patrón Toyota Camry Funny Car team will also have the opportunity to race for a $100,000 purse when they compete in the Traxxas Nitro Shootout, a race within the race. DeJoria earned her spot in the Shootout when she and her team were victorious at the NHRA Nationals in Las Vegas earlier this season.

“Indy is the biggest race of the year. I’ll have my friends and family in the pit cheering us on. Between the Traxxas Nitro Shootout, the points-and-a-half format, and all of the extra fanfare that comes along with Indy, it’s shaping up to be an intense, but exciting weekend.”

“I’ve had a lot of time to rest, practice and get myself race-ready. I’m eager to get back into my Patrón Toyota Camry and do work.”