Now, the Pro Mod standout will try to top one of the most impressive single-day performances of the 2018 season heading into this year’s third annual DRAG ILLUSTRATED World Series of Pro Mod.

It takes place Aug. 9-10 at Bandimere Speedway, the site where Stevens made history a year ago, earning a $100,000 check in the process. From never running in altitude to going an incredible 5.856 at 246.26 mph in the final round against Danny Rowe, Stevens and his team made remarkable progress in a matter of days to claim the biggest win in his career.

Now, he’ll try to repeat it on another huge stage against 23 other standout Pro Mod stars. There will be a 16-car qualified field and the scoreboards will be on this year, but Stevens is ready for the challenge. He talked with DRAG ILLUSTRATED about what went right a year ago, the pressure of being the defending champ and what it will take to win in 2019.

DRAG ILLUSTRATED: How long did it take you to realize you had won the World Series of Pro Mod last year?

CARL STEVENS JR.: It probably took a week or so for everything to sink in. Everything happened so fast, I really didn’t have a chance to process it all right away. It was definitely a big deal.

DRAG ILLUSTRATED: You’ve obviously had a lot of success in your career. How did winning the World Series of Pro Mod add to it?

STEVENS: It really just kind of solidified what we we’re capable of doing. I enjoy driving but my primary goal is to sell engines and tune cars. That aspect was just big and we came through. It was our goal to put together a package that can win these types of races and run at the top of these big races, so that was a big deal for us. We definitely ran well. There are no freebies out there, that’s for sure.

DRAG ILLUSTRATED: Is there any way to replicate a weekend like that again?

STEVENS: It was just like a picture perfect weekend a year ago. That puts a ton of pressure on you in 2019 to try and repeat, and it’s a very humbling sport.

There’s so many little things that can come up and get you in the course of a weekend. All of that is in your head moving forward and the reality of it is you don’t often have weekends like we did last year. In reality, I’ve been doing this long enough to not go in with any huge expectations. We just want to try to do the best we can and not worry about anyone else.

DRAG ILLUSTRATED: Do you feel like there’s pressure on you heading into the 2019 race as the defending champion?

STEVENS: For sure there’s pressure. Anybody would be lying if they told you after winning a race like this and trying to defend it that there wasn’t pressure. Last year we went there and just hoped we could make a respectable run. We made a couple test runs and it was like, ‘Holy shit, I didn’t think it would run this well.’ We just stopped testing right there because those first couple passes went so well. But now we’ve got all this data so we can try to improve on it this year.

DRAG ILLUSTRATED: There’s been changes in the format as opposed to the first two years of the World Series of Pro Mod. With the clocks turned on and having a 16-car qualified field, does that alter anything for you?

STEVENS: I don’t think it really changes anything as far as your approach. I liked the platform where you didn’t know what everybody else was doing, but I think a 16-car field and having it be a qualified field is the way to go. That’s the right direction for this race, but I don’t think it changes anything as far as how you approach the race. For us, we would like to qualify at the top of the list and take it from there.

DRAG ILLUSTRATED: All eyes will be on you this year, so that’s an adjustment this year. How did you approach the race a season ago and what can you take from that?

STEVENS: At one of these big races, you have to take it a round at a time, and then just focus on making the next run. We went there last year with no expectations and we had never raced at altitude. I couldn’t even get the engine to idle at first. I was pulling my hair out. We had the torque converter out probably a dozen times, but we were able to figure it out pretty quick. That first run definitely gave us confidence in what we could do. We had heard that some guys went low 5.90s last year, so to go 5.86 at 248 on the first run we thought that was pretty good. That was just throwing a tune-up in it and not really knowing where to start, too. Then we just made small changes from there.

DRAG ILLUSTRATED: What would it mean to win this race for a second straight year?

STEVENS: It would be huge. I couldn’t even fathom it. But I try not to look too far ahead. Of course, you think about it and it would be pretty badass, but realistically, there’s so many variables that come into play, too. We’re going to give it hell, though. 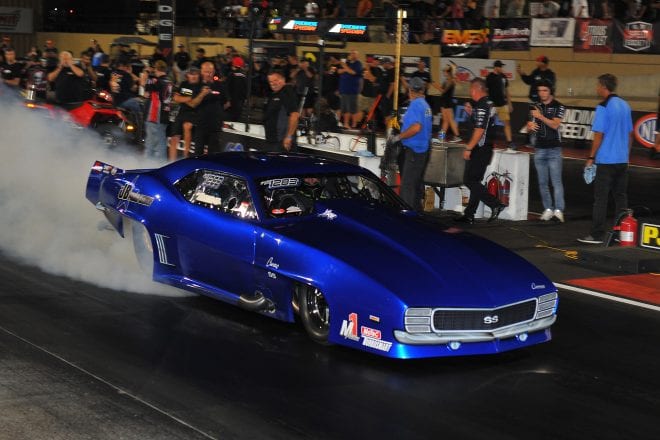