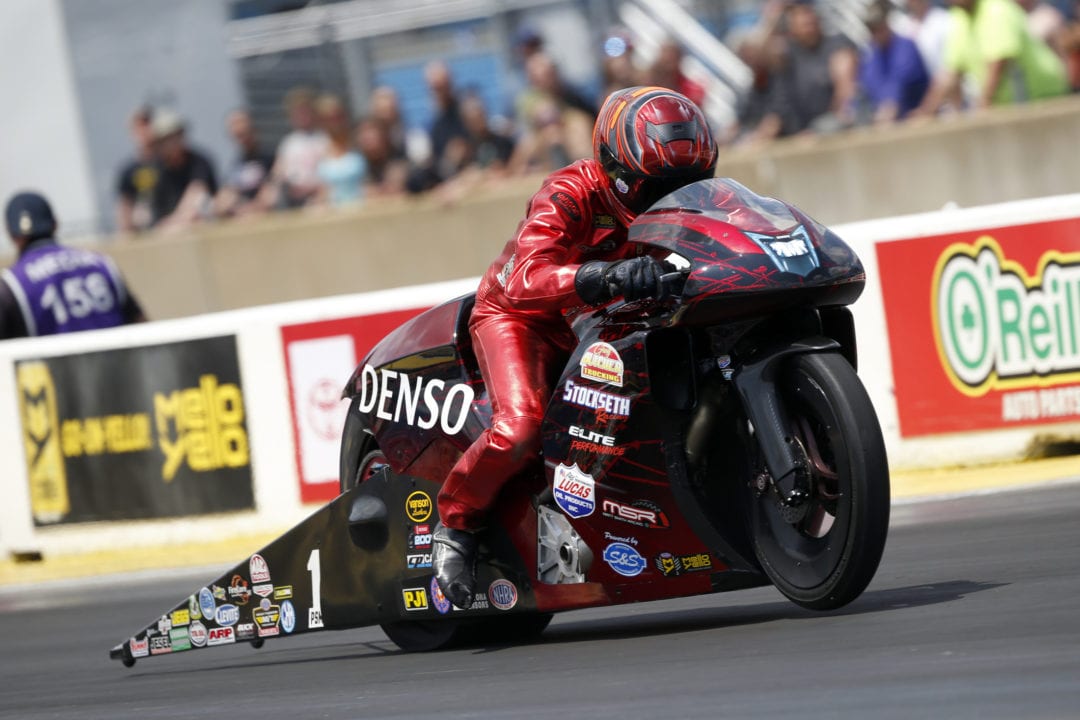 Matt Smith wrapped up his third career NHRA Mello Yello Drag Racing Series world championship with a record-breaking performance on the final day of the 2018 season in Pomona. But the Pro Stock Motorcycle standout fully believes that championship run was set in motion thanks to his impressive performance at Sonoma Raceway.

Smith won the Mickey Thompson Tire Pro Bike Battle as part of the NHRA Sonoma Nationals, which takes places at Sonoma Raceway, July 26-28. The victory over Eddie Krawiec in the final of the bike battle on Smith’s Denson/Stockseth/MSR EBR netted him $25,000 and provided a huge boost of momentum as he prepared for his title chase. Returning to the facility in the heart of Northern California’s wine country fourth in points, Smith is after a similar spark in 2019.

“It assured us we could really go after that championship last year,” Smith said. “To me, when we beat (Krawiec), it really showed us we could race for a championship and have a chance to win it. Last year was the first time anyone on my team won the bike battle, and it was just great to finally win it. We really appreciate Mickey Thompson doing this for the class. It’s been a good journey and a good fit for the class. So to get that win, it was pretty awesome. If you do well at Sonoma, you know you’re in a good spot come Indy.” 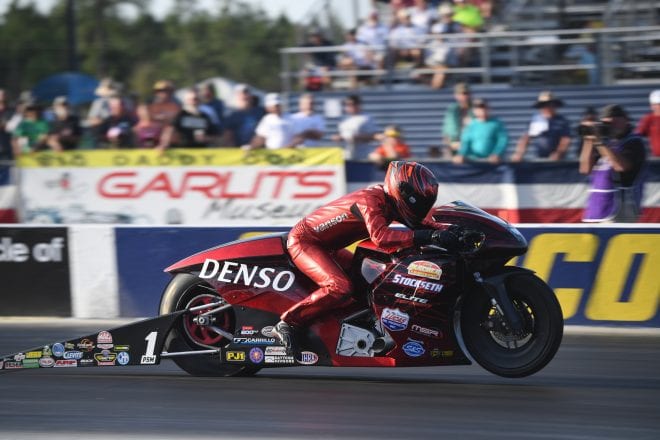 Blake Alexander (Top Fuel), Robert Hight (Funny Car), Jeg Coughlin Jr. (Pro Stock) and LE Tonglet (Pro Stock Motorcycle) were last year’s winners of the event that will be televised on FOX, including live final eliminations coverage starting at 5:00 p.m. (ET) on Sunday, July 28. It is the ninth of 16 races during the 2019 Pro Stock Motorcycle season, and marks one of the most important weekends of the year for the riders in the talented category.

The class takes center stage in Sonoma with the Mickey Thompson Tire Pro Bike Battle, a special race-within-a-race on Saturday featuring eight top riders. The field will be set after this weekend’s race in Denver, but Smith has already secured his spot. He’ll try to win the all-star race for a second time, relying on engine that went a record 201.76 mph in Gainesville this year, keyed his bike battle victory a season ago and also led to his record-breaking performance to clinch the title.

“All of our new motors are pretty good, but we have one that just stands out,” said Smith, who has 23 career wins. “That’s the one we ran at the end of last year, and we ran it again at Gainesville and broke the (speed) record again. I put it back in at Chicago and won that race. It’s going back in the bike in Sonoma, and I think it’s going to be fast, so we feel good about it.”

Smith will have to face off against the likes of Krawiec, points leader Andrew Hines, who has an impressive five wins in 2019, Hector Arana Jr. and Angelle Sampey, but the veteran feels confident about the way the three-bike team of his wife, Angie, and Scotty Pollacheck has come on. Angie still has a shot to advance into the bike battle with a strong showing in Denver, while Matt, who won earlier this season in Chicago, believes things are coming together at the right time.

“Sonoma has always been a big bike race and I think we’re in a great spot,” Smith said. “Angie ran really well at Norwalk, and we finally got Scotty’s bike to perform like it should. We qualified all the bikes in the top seven and everyone won in the first round, and I think we’re right where we need to be. With the way the Countdown is, you’ve got to be good at the end of the year.”