After spending 2012 pursuing the inaugural ADRL Top Sportsman championship, the Suwanee, Georgia-based golf cart dealer is heading back to NHRA Division 2 competition, where he will mount a full-time campaign to win his third NHRA divisional title to go along with five previous IHRA championships.

“The competition was intense with the fast 16-car fields in the ADRL last year and I enjoyed every moment of the experience,” said Davis, who won two races before finishing third in the final point standings. “But my heart always remained with the Top Sportsman series that I helped develop and bring to NHRA back in 2002 with (retired Div. 2 director) Bill Holt. So I’m really looking forward to getting back out there and making a run for the championship again.” 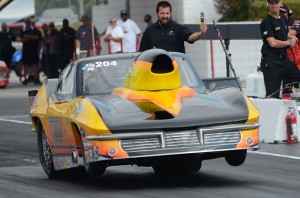 Davis’ ambitious 2013 campaign begins this weekend (Feb. 15-17) with the NHRA Div. 2 event in Gainesville, Florida, the first of six within the division, plus he will attend at least two other NHRA divisional races to gain points from eight total events this season. Additionally, he plans to attend several NHRA national events featuring Top Sportsman, as well as select events with the ADRL and the all-new XDRL.

“It’s going to be a very busy year,” Davis said. “My number-one focus, of course, will be running my business, Davis Golf Carts, which also has been the Div. 2 Top Sportsman title sponsor since its beginning. But in racing my focus will be firmly on winning the NHRA Division 2 championship and we’ll do whatever we can beyond that.”

In most instances, Davis will race his black-and-gold-colored Tommy Mauney-built ’63 Corvette fitted with a nitrous-injected  Roush Yates 822 cubic-inch engine at the quarter-mile NHRA events, with his orange Mauney ’63 Vette powered by an 738 c.i. nitrous-boosted Roush Yates motor available for the ADRL and XDRL eighth-mile events.

“Me and (longtime crew member) Pete (March), we’ve got a lot of work ahead of us, but hard work is what’s needed when you’re doing something like this. Running a business or going racing, it doesn’t matter; you’re going to get out of it what you put in,” Davis stated.

“I also couldn’t do this without all the great support I get from my sponsors like Roush Yates and I also want to welcome Hoosier Tires to the team,” he added. “I’m excited about getting back to the NHRA with them and looking forward to a good year.”