Maryland’s own Mo Hall claimed the DiSomma Racing Engines Outlaw 10.5 win in the class’ second stop with the PDRA. Number one qualifier John Montecalvo won in PDRA Extreme Pro Stock, adding to his event titles in two other major series.

For the first time since the PDRA’s inaugural season in 2014, Florida’s Tommy D’Aprile scored the win in Pro Extreme, the PDRA’s quickest and fastest category.

“Big relief, I can tell you that,” D’Aprile said of breaking through for the win. “What was really exciting for me is that the guys who work on the team right now never had a win in any category. It was a first for them, so it was really special to be able to see that.”

“In that left lane, I can tell you I probably came within less than a foot from hitting that wall when I was running John Stanley. I actually had to lift and pull the ‘chutes. Luckily I stayed in front of John. He was on a good run but ran into problems of his own. To me, that was the scariest and most exciting and crazy round,” D’Aprile recalled.

The Mel Bush Motorsports team was preparing their screw-blown 2015 Corvette for a final-round race against number one qualifier Brandon Snider when Snider’s crew chief informed them that the Q80 Racing Camaro would be unable to return for the final. D’Aprile staged, took the green light and idled to a 12-second elapsed time.

“As the saying goes, you really want to race for it, but with the day that we had I would take it any way we could get it. The truth is Brandon is a really close friend of mine and I know that we’re going to be able to race each other again. We’ve had some really good battles in the past.”

Always humble in victory or defeat, D’Aprile praised his team for their efforts in the hot conditions.

“I’m grateful for (team owners) Mel and Johanne Bush and the guys who work with us. We have Al Billes tuning for us now. We’ve won several races together and I think this is the start of something really good. We’re really gelling as a team right now and I’m really excited to see what’s going to happen.” 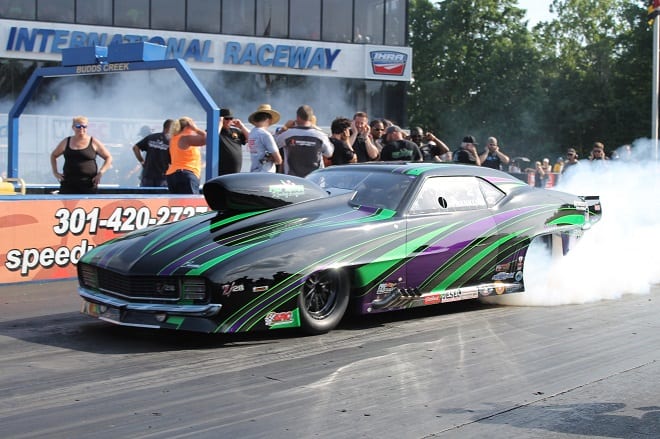 The North-South Shootout trophy in Pro Nitrous had a short journey to its new home in Tommy Franklin’s trophy case in nearby Fredericksburg, Virginia. The local hero, who recalled a crash at this track eight years ago to the date, was eager to perform well for the home crowd.

As one of the quickest cars throughout qualifying and eliminations, Franklin and his Musi-powered 1969 Camaro made racing look easy. In reality, he was fighting the same conditions as the rest of the field.

“Just racing the racetrack was the biggest concern with the high track temperatures. I had a hard road to go through. I had Tommy Mauney, then Ron Muenks, then Stevie Jackson, and Travis Harvey in the final. I definitely had the bad side of the ladder,” Franklin claimed.

“I didn’t think that I’d even achieve a win at all this year,” admitted Strickland. “I knew the team was capable of 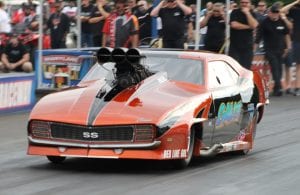 achieving a win. I just didn’t think as a driver that I would be capable of doing that because it’s still pretty early in my racing career. The first time out, I struggled with reaction times and I said, ‘Well, I probably won’t win one this year but if I work hard at it this year I’d like to get one next year.’ It all just clicked and started coming together. I have a lot more confidence now than I did have – and two wins definitely helped that,” Strickland laughed.

Strickland’s 1968 Camaro, owned by Earl and Peggy Wells, made it down the tricky MDIR strip on all four qualifying attempts. A 3.815 at 196.44 during Friday’s night session solidified Strickland’s position as the number one qualifier.

“That Friday night round was just a round to see what you could do. It didn’t really help any as far as raceday being on Sunday because it was so hot. All of our racing conditions were similar to what we saw during qualifying on Friday. It helped to have those qualifying passes in the heat to help set up for eliminations,” Strickland noted.
Strickland and Miller were the only two drivers to dip into the 3.8s during Sunday’s continuation of eliminations, so a tight final round was anticipated when Strickland defeated Melanie Salemi and Miller beat GALOT driver Todd Tutterow in the semifinals.

“I knew that I had a car that was capable of winning. I knew that Tylor also had a competitive car, which I was glad to see they came back and ran so well. I knew he was real good on the tree. I felt real confident in the car and the team. I just knew that I would have to go out there and do as good as I had been doing or better to make it work out, and it did,” Strickland said of the 3.89-to-3.99 final round decision.

Unlike a majority of the competition, McKinney’s Suzuki went faster as the track got hotter in eliminations. He first ran a 4.10 over Ashley Owens on Saturday evening, then stepped up to a 4.07 to eliminate the number two rider in points, Chris Garner-Jones, in the second round. McKinney unleashed a 4.055 at 176.35 to claim low et and top speed of the event in his semifinal victory over number one qualifier Travis Davis and his 4.07. Another 4.07 popped up on the scoreboard in McKinney’s lane in the final round over Norris’ 4.20.

Two Maryland drivers were the only guys left standing in Outlaw 10.5 after racing on a hot, tricky track all weekend. Number one qualifier Mike Decker Jr. looked to be the favorite in his supercharged 2002 Camaro, but number two qualifier Mo Hall overcame a .137 reaction time to defeat Decker in 4.174-to-4.348 final round. 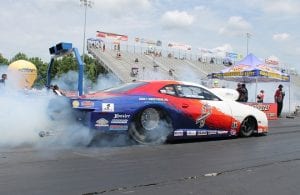 Mountain motor Pro Stock veteran John Montecalvo worked his way through eliminations from the number one spot, first running 4.158 on a single in the opening round, then stepping up to a 4.129 in the semifinals against Michigan race winner John Pluchino. Rockingham winner Richard Penland surpassed his qualifying performance in the first round with a 4.147 against Brian Gahm. He received the scheduled bye run into the final round.

The win light came on in Montecalvo’s lane before he even left the starting line, as Penland was .032 red. Montecalvo motored on to a 6.134 to claim his first win with the PDRA.

Top Sportsman finalists Glenn Butcher and Tim Lawrence proved that having the fastest car doesn’t matter much when eliminations roll around. Lawrence, the thirteenth qualifier, left the starting line first in the final round, but broke out with a 4.153 on a 4.18 dial-in. Butcher, who qualified his 1969 Camaro in the sixteenth spot, ran a 4.178 on his 4.16 dial-in to score the event win.

A pair of near-perfect reaction times started off the Top Dragster final round as Travis Laster and Lauren Freer faced off. Laster left the line second by one thousandth of a second, but ran closer to his 4.00 dial with a 4.024. Freer ran 4.112 on a 4.06 dial in her runner-up effort.

The PDRA will return to action August 11-13, with the 3rd annual PDRA Memphis Drags at Memphis International Raceway in Millington, Tennessee.